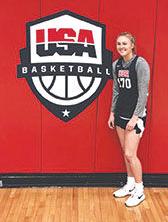 Marist junior Sydney Affolter competed on May 23-27 at the 2019 USA U16 Women’s National Team trials in Colorado Springs at the U.S. Olympic Training Center. (photo courtesy of the Affolter Family) 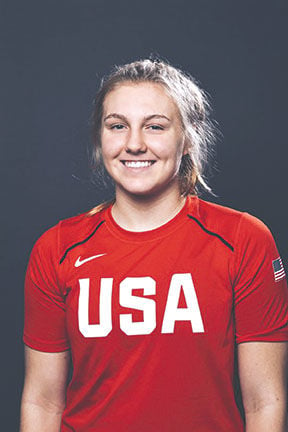 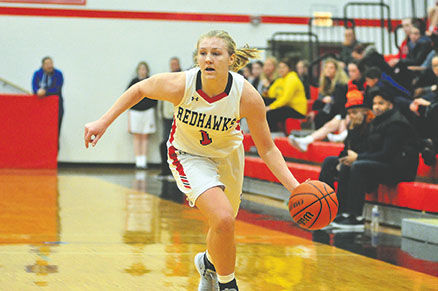 Sydney Affolter averaged 17 points, 6.9 rebounds, 2.5 steals, 1.2 assists and a block during her sophomore season at Marist. She currently has double-digit Division-I offers to play in college. (Review file photo)

Marist junior Sydney Affolter competed on May 23-27 at the 2019 USA U16 Women’s National Team trials in Colorado Springs at the U.S. Olympic Training Center. (photo courtesy of the Affolter Family)

Sydney Affolter averaged 17 points, 6.9 rebounds, 2.5 steals, 1.2 assists and a block during her sophomore season at Marist. She currently has double-digit Division-I offers to play in college. (Review file photo)

Sydney Affolter was rightfully disappointed after the 2019 USA U16 Women’s National Team trials in May.

The Marist junior-to-be advanced through two cuts but did not make the final round.

Despite the setback, the star basketball player said the big-picture positives were plenty.

“I was so thrilled to be able to go and see that level of competition,” Affolter said. “It was such a great opportunity that, no matter the outcome, it was a good experience to compete at that level.”

Affolter (Mt. Greenwood, St. Christina) was one of over 150 athletes competing May 23-27 at the team trials hosted at the U.S. Olympic Training Center in Colorado Springs, Colo.

The final 12 players to survive cuts advanced to a 10-day training camp and then to the FIBA Americas U16 Championship June 16-23.

For Affolter, a 5’11” wing, the trials were wall-to-wall hoops as she battled some of the nation’s best underclassmen for a spot on the team.

“Stretch in the morning, workouts, position work, installing the offense, we were going from 8 in the morning to 8 at night,” Affolter said. “I wasn’t nervous going in. It was cool to see how I rank against girls from around the country and the type of player I want to be.”

As for playing in the higher altitude of Colorado, she said it took time to get acclimated.

“I thought I was in pretty good shape, but you were gassed at the end of each session,” Affolter said with a laugh. “I know I can be in better shape and always get bigger and stronger.”

Affolter said she was impressed by Ruthie Bolton, a two-time Gold medalist and two-time WNBA All-Star, who talked with the athletes during a break between sessions.

As for Affolter’s on-court skills, she knows what she needs to improve.

“You can always get better as an all-around player. I want to work on my mid-range game,” Affolter said. “That was the biggest thing. I want to have that as part of my game.”

Although she didn’t make the cut, Affolter took pride in wearing her country’s red, white and blue at the Olympic training facility.

“Even not making Team USA, it gives her a vision of what she has to do to be an elite player, to be the best of the best,” Connolly said. “She’s not afraid to hold others to a higher standard, so she really has matured as a leader.”

She was named All-Conference in the East Suburban Catholic Conference for a second straight season.

The highly touted athlete currently has over 10 Division-I offers as she decides where to continue her academic/athletic career.

“For me, recruiting has been a great process,” Affolter said. “I know what I’m looking for. I want to get to know the coaches, and I like the coaches who really try to get to know you. It’s about building a relationship.”