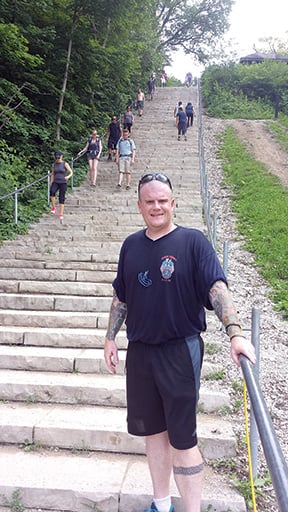 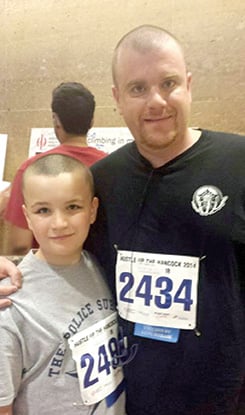 Chicago Police Officer Steve Coyne, of Mt. Greenwood, and his son, Christopher, an incoming fifth-grader at Cassell Elementary School, pause for a photo at the 2013 Hustle Up the Hancock. Coyne is climbing 110 stories on Sept. 6 in memory of the first responders killed on 9/11.

Chicago Police Officer Steve Coyne, of Mt. Greenwood, and his son, Christopher, an incoming fifth-grader at Cassell Elementary School, pause for a photo at the 2013 Hustle Up the Hancock. Coyne is climbing 110 stories on Sept. 6 in memory of the first responders killed on 9/11.

A local first responder is honoring brethren who perished in New York on 9/11 by climbing 110 flights of stairs in their memory.

Steve Coyne, a 16-year veteran of the Chicago Police Department (CPD), is one of 70 law enforcement officers and 343 firefighters participating in the 9/11 Memorial Stair Climb in Dallas on Sept. 6.

With the motto “We climb because they climbed,” the event features a moment of silence at 8:46 a.m., the playing of taps at 9:59 and 10:28 a.m.— the moments at which the two towers fell—and artifacts from Ground Zero, including a piece of steel and the helmets of two New York firefighters killed in the terrorist attack.

Coyne, 43, of Mt. Greenwood, an officer in the 7th District of the CPD, will head to Dallas for the event with his wife, Marnie, and 9-year-old son Christopher. A member of the Bagpipes and Drums of the Emerald Society of the CPD, Coyne will also travel to Dallas with his bagpipes and play in the opening ceremony of the event.

While it’s his first time participating in the Dallas event, climbing stairs for charity has become a hobby that began a couple of years ago when a friend asked Coyne to climb the 80 floors of the Aon building in Chicago to benefit Lurie Children’s Hospital, he said.

Since then, Coyne said, he has climbed the Aon building an additional two times, the Willis Tower twice, the John Hancock building twice and high-rises in Los Angeles and Buffalo, N.Y. He also participated in the American Lung Association’s Power Hour, where participants climb the 31 stories of the Oakbrook Terrace Tower as many times as possible in 60 minutes. Coyne’s son Christopher joined him for many of the events.

Coyne trained for his first stair climb indoors on a stair machine, he said, but has since transitioned to training outdoors on a former toboggan run at the Cook County Forest Preserve District’s Swallow Cliff North in Palos Park. The preserve features 125 limestone steps that lead to the top of a 100-foot bluff.

“It’s a great workout, and it doesn’t bother my knees as much as running does,” Coyne said. “I have a friend who has run the Chicago Marathon; he climbed the stairs five times and said he couldn’t move his legs the next day. I’ll climb it 25 to 30 times on a good day, 10 times on a bad day, but I usually try to keep it around 15 times four to six times a week when I’m training for an event and two to three times when I’m not.”

Losing weight and becoming more physically fit is one of the benefits of Coyne’s hobby, he said. He recently lost 35 pounds and has noticed an improvement in his cardiovascular health, demonstrated during his participation in the annual Battle of the Badges boxing exhibition between the Chicago Fire and Police departments.

“I couldn’t have done this at 21,” he said. “I was too busy drinking and lifting weights.”

Coyne said he has wanted to participate in a 9/11 memorial climb ever since seeing the devastation at Ground Zero in February 2002.

“Even though five months had passed, it was unimaginable what the first responders dealt with on that day,” Coyne said. “Dallas is the first one that I found that allows police to participate along with firefighters.”

To donate, visit the Web site at crowdrise.com and search for Steve Coyne Chicago PD Bagpiper.