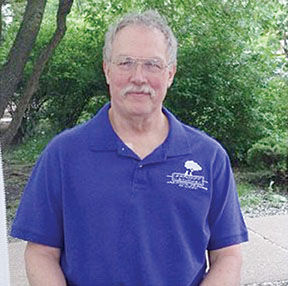 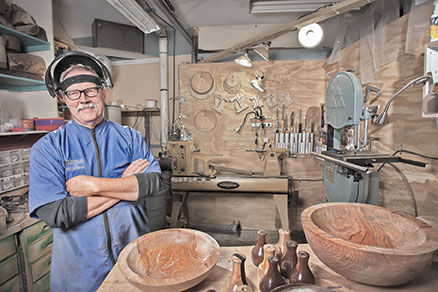 Dale VanderBloomen was right at home in his garage-turned-workshop on the 1600 block of West 100th Place. The owner of Catwood Studios—and an incredibly gifted craftsman—VanderBloomen sold several of his products at local businesses, and he also completed major renovations to his home. 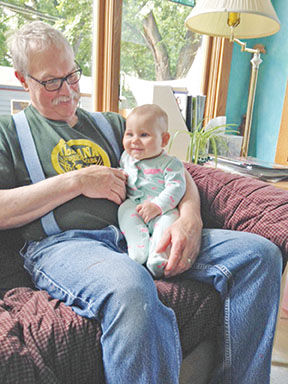 VanderBloomen was a loving grandfather to Olivia (right), his only grandchild, whom Niki Cordell, Olivia’s mother, described as “the light of his life.” VanderBloomen died on July 14 at age 65.

Dale VanderBloomen was right at home in his garage-turned-workshop on the 1600 block of West 100th Place. The owner of Catwood Studios—and an incredibly gifted craftsman—VanderBloomen sold several of his products at local businesses, and he also completed major renovations to his home.

VanderBloomen was a loving grandfather to Olivia (right), his only grandchild, whom Niki Cordell, Olivia’s mother, described as “the light of his life.” VanderBloomen died on July 14 at age 65.

As his friends and family mourn his absence, Dale VanderBloomen’s presence can still be felt inside his home on the 1600 block of West 100th Place.

A master wood craftsman, he remodeled the kitchen and built an addition to the second floor, and his hand-crafted furniture fills the home. The owner of Catwood Studios, a wood design company that he operated out of his garage, VanderBloomen was known as a gentle soul who could build just about anything.

VanderBloomen, 65, died unexpectedly on July 14, but his craft provides wonderful reminders of an outstanding man.

“Everything you see in here, he built—except for the living room,” said Kathy Stathos, his wife of 37 years, while seated in the family kitchen.

From radiator covers to bowl art to a table top he built for a living room coffee table that a family dog had scratched up, VanderBloomen had a passion for woodwork.

A Beverly resident since 1979, when he and Stathos moved into their home, VanderBloomen also built a front porch for the home, which was featured in the 1985 Beverly Hills/Morgan Park Home Tour.

However, it was in the family garage turned workshop where the creative magic happened. The name “Catwood Studios,” his wife said, came from two things that VanderBloomen loved: cats and wood.

Often, his family said, VanderBloomen would spend an hour or two in the shop, then come in to get off his feet. A Vietnam War veteran, VanderBloomen suffered from peripheral neuropathy, which caused severe pain in his feet.

The pain hardly stopped him from being active. He loved riding his bike while taking his two dogs, Maddie and Cody, for walks, and he was always busy in the workshop.

“He could do anything with a room—plumbing, wiring, you name it,” Stathos said.

Yet, for as good as he was, he was never above seeking help on a project, said one of his two daughters, Jayme Stathos-VanderBloomen.

“He could do it all, but he knew when to call someone,” Jayme said.

Stathos met VanderBloomen when the two attended Southern Illinois University in Carbondale, she said. As long as she knew him, he was always good with his hands, she said, and when the two moved into Beverly, they began renovating homes and then selling them.

They found inspiration, Stathos said, in a book they read in college, “How to Make a Million Dollars Flipping Homes.”

“Of course, we never made a million dollars, but it was a living,” Stathos said.

After the couple had remodeled 10 homes, VanderBloomen turned his attention to making furniture, Stathos said.

He was a member of the American Woodturners Association, and his talents were wide-ranging. He once made a Buddhist altar upon request for a customer.

Today, nearly every room in his home holds a reminder of his skills and passion for creating things of beauty.

“He had a really good mind. He could figure anything out,” Stathos said. “He often said college taught him to think.”

He was a fixture at all their activities, and in the family backyard, he built for the girls a small playhouse that had electricity and bunk beds.

“He would do anything for them,” Stathos said.

Whether it was volunteering at their schools or attending their sporting events, VanderBloomen was actively involved in his daughters’ lives.

“I played soccer all my life, and he missed maybe two games my entire life,” Jayme said.

Niki, she said, recently had a broken refrigerator in her home that a repairman couldn’t figure out after five visits. Her dad, however, realized it was an electrical problem and fixed it in less than a half hour.

As is the case with many Vietnam War veterans, VanderBloomen experienced traumatic events while serving in the 101st Airborne Division. At a time he thought he was set to be discharged, he was instead assigned another mission. That mission is chronicled in Keith Nolan’s book “Ripcord: Screaming Eagles Under Siege.”

VanderBloomen earned several medals for his Vietnam service, including a Bronze Star. After his death, men he fought alongside wrote to Stathos, including Dale’s commander, Chris Straub, praising his attitude and leadership skills.

“I am most sorry to learn of his passing,” Straub said. “Dale was one of our best men—I knew I could always count on him. Also, his smile and sense of humor helped raise everyone’s spirits. May God bless him, and you, and your family at this tough time.”

Ray “Blackie” Blackman said he met VanderBloomen in April 1970 while in Vietnam and that he provided much-needed support.

“He helped me cope with my fear during those first couple months of my tour, and I never got the chance to thank him for that,” Blackman wrote. “I looked up to him as an experienced combat soldier, yet he seemed gentle and kind at the same time. It was a very difficult time to be kind in Vietnam, but he did it. I am so sorry for your loss, and for our loss.”

VanderBloomen was a feminist, Stathos said, and also became deeply interested in her Greek heritage. She kept her maiden name when they married, and both daughters used both last names, until Niki married.

VanderBloomen became known as “Papou,” Greek for “grandfather,” and adored his only grandchild, Olivia, Niki’s daughter. She was the “light of his life,” Niki said.

“I don’t know if it’s his mustache, but he could get her to smile, like on command,” Niki said.

VanderBloomen’s greatest gift to Niki, she said, came when sharing advice on marriage. She married her husband on Nov. 19, 2011, and she emotionally recalled the lessons her father taught her on being a loving spouse and what to look for in a husband.

“I will feel forever grateful that he was able to do that for me,” Niki said.

Close friend Richard McGourty, who delivered the eulogy at VanderBloomen’s funeral services, said he once remarked to VanderBloomen that he was a “beautiful artist,” to which VanderBloomen, who had participated in many art fairs in the city, quickly replied that he was a craftsman—not an artist.

VanderBloomen was incredibly generous with his time and talent, McGourty said, and his loving personality always shined through.

On Niki’s wedding day, McGourty said, VanderBloomen caught everyone off guard when, despite severe pain in his feet, he pulled off a memorable first dance with his daughter that was “so absolutely joyful.”

“He was very much a kind and thoughtful person, but he tried to maintain a gruff exterior that nobody bought,” McGourty said. “We knew better. He was a sweet guy and a very thoughtful guy.”

McGourty compared VanderBloomen’s death to that of the late Jack Simmerling, a world-renowned local artist who was an icon in the neighborhood until his death in 2013.

It will be difficult to fill the void such a well-known person leaves, but, McGourty said, the love the family shares is helping them and friends push through.

“We should have had Dale for longer,” McGourty said.

Memorials can be made online to Midwest Shiba Inu Rescue at shibarescue.org and Pets for Vets at pets-for-vets.com.