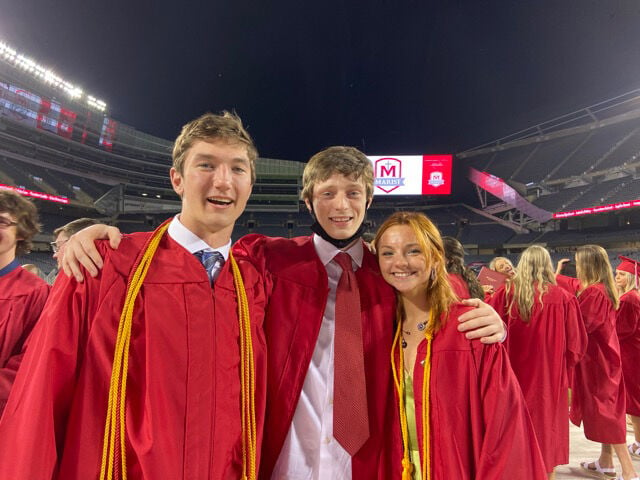 Members of the Marist High School Class of 2021 listen as Principal Dr. Kathryn Baal addresses the audience at Soldier Field on May 21. Baal encouraged graduates to remember their faith and friendships as they head into the next chapters of their lives.

Members of the Marist High School Class of 2021 listen as Principal Dr. Kathryn Baal addresses the audience at Soldier Field on May 21. Baal encouraged graduates to remember their faith and friendships as they head into the next chapters of their lives.

Marist High School held its 55th annual commencement exercises on Friday, May 21, at Soldier Field, sending off an accomplished class of 376 young men and women.

The graduates continued to build Marist’s strong academic reputation and garnered more than $51 million in college scholarships. They sent out 2,393 college applications to 354 colleges and universities across the country.

The Faculty Award, which is voted on by Marist teachers, honors students who embody the ideals of a Marist graduate in faith, service and academics, and it was given to Kaylen Baker, Jack Harmon, of Evergreen Park, and Sarah Hughes, of Evergreen Park.

Class members Nick Vallie, of Morgan Park, and Ed Carroll, of Mt. Greenwood, will enlist in the U.S. Navy and U.S. Marines, respectively.

At the heart of their Marist experience was spiritual growth. While some programs were curtailed due to the pandemic, the class participated in grade-level retreats throughout their four years, service projects and liturgical celebrations and sacraments.

After the bell rang each day, seniors participated in clubs and activities, sharing their leadership and expertise with the school community. Marist seniors were leaders on the math team, which finished seventh in state overall. Members of the school newspaper advanced and placed in the IHSA journalism finals, with PJ Cunningham, of Beverly, being named Marist’s first state champion journalist. Student council members planned a variety of events and activities throughout the year. The theater guild produced a fall drama and spring musical to the delight of audiences, even when they had to go virtual. The band and chorus members continued to perform despite the challenges and produced two virtual concerts during their senior year.