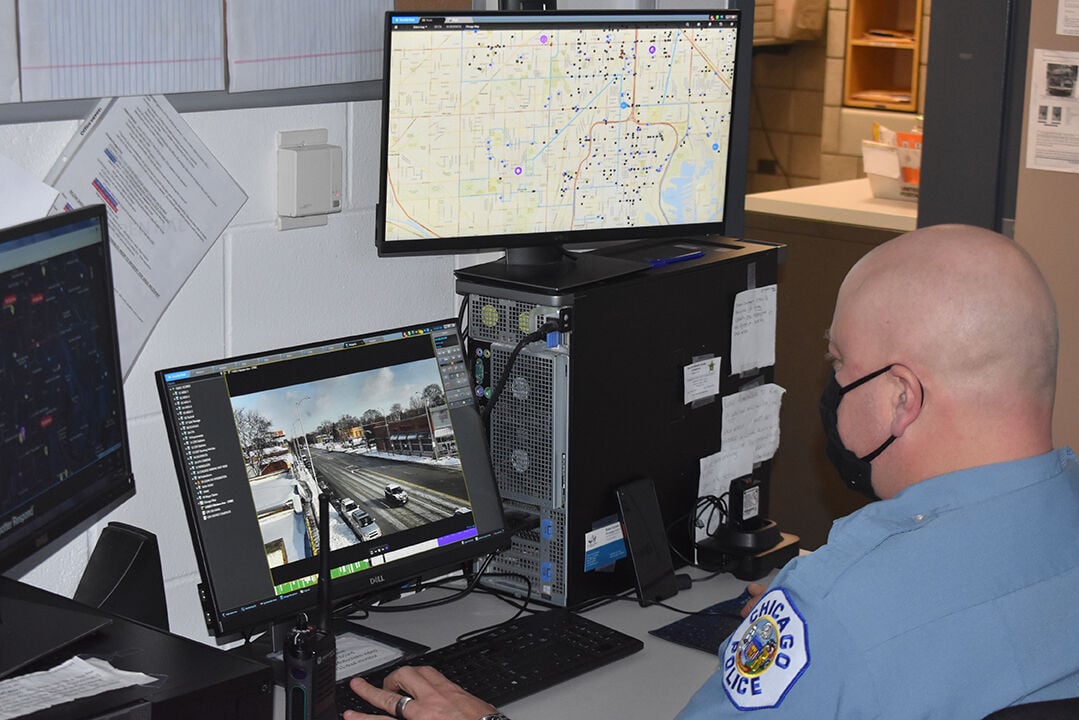 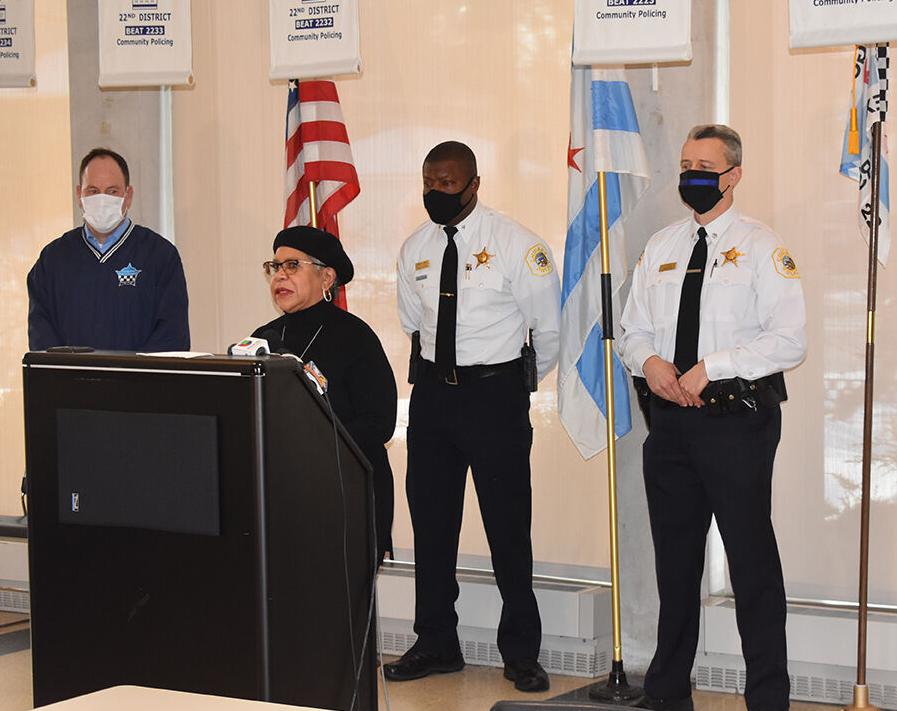 Barbara Marsh, owner of Let’s Get Poppin,’ speaks at the news conference announcing the new cameras. The video security system at her store helped police identify four suspects who were later arrested for the fatal shooting last year of retired Chicago Fire Department Lt. Dwain Williams. Officials said they are grateful that Marsh had a security system in place, and they hope new police cameras will reduce crime. (Review photo)

Barbara Marsh, owner of Let’s Get Poppin,’ speaks at the news conference announcing the new cameras. The video security system at her store helped police identify four suspects who were later arrested for the fatal shooting last year of retired Chicago Fire Department Lt. Dwain Williams. Officials said they are grateful that Marsh had a security system in place, and they hope new police cameras will reduce crime. (Review photo)

After multiple fatal shootings last year outside local businesses, the city will install more than a dozen new public-safety cameras throughout the 19th Ward to help police solve crimes.

Unveiling the plan on Feb. 5, 19th Ward Ald. Matt O’Shea joined top officials from the 22nd District of the Chicago Police Department (CPD). He said the police-monitored video system will be a vital complement to the security systems that businesses use, and it will help police identify criminals and lead to arrests.

“High-quality video is an invaluable public-safety tool,” O’Shea said. “We need to do more as a community to partner with and support the police.”

According to CPD officials, police observation device (POD) cameras and license plate reader (LPR) cameras are being installed throughout Beverly, Morgan Park and Mt. Greenwood. Those will be in addition to the 11 cameras already in place, and officials said the new devices are of higher quality and have more capabilities.

Installations will continue throughout the year.

He credited CPD Lt. Brian Kinnane and 22nd District SDSC Sgt. Vladan Milenkovic for their recommendations about sites where the cameras would be most effective.

“When [SDSC] officers witness crimes occurring in eye view of these cameras, they communicate instantly with officers who are in the field, responding to these scenes,” Joyce said. “Critical information is conveyed during those communications, such as description of offenders, description of the vehicles being used in these crimes, direction of flight.

“Moreover, historical data captured by these cameras helps strengthen our subsequent investigation of these crimes and gives us a leg up in the effort to prosecute criminals and hold them accountable for their conduct.”

According to Joyce, security cameras give police “an extra set of eyes” in the battle against crime. The CPD operates over 4,000 cameras, he said, and has partnerships with the Chicago Transit Authority, Chicago Housing Authority, Chicago Department of Transportation and private companies to have access to over 33,000 cameras.

O’Shea said the local cameras are being funded through the aldermanic menu program, which was created by the city’s Capital Improvement Program and allows aldermen to choose from a menu of infrastructure/project options.

Fortunately, Let’s Get Poppin’ had security cameras that recorded the crime where retired Chicago Fire Department Lt. Dwain Williams was shot and killed during an altercation with four individuals on Dec. 3.

Joyce and O’Shea said that security camera footage helped lead to the arrest of four suspects.

A new POD camera is near Let’s Get Poppin’. Owner Barbara Marsh, a 50-year local resident, said she is glad her private system has been beneficial to police.

“I felt it was our obligation to put cameras up in our store, not just to protect my family, but to protect my employees and my customers,” she said. “When I moved into the neighborhood, there was so little crime. The last two or three years, I have seen more crime than I ever could imagine. I have an obligation as a resident and a businessperson in this area to try to do everything that I can to protect as many people as I can.

“The cameras have been very helpful not only to capture Lt. Williams being murdered; it has also captured many other things that police officers have come to us and asked for our aid in looking at our cameras.”

While he was pleased that Let’s Get Poppin’ had video footage of the incident, he prefers that police have an easier time locating security images.

“I don’t want police officers from the 22nd District spending hours knocking on doors, trying to find video footage,” he said. “I want to know that they’re utilizing advances in technology and have a reliable network of cameras that can help law enforcement keep all of us safe.”