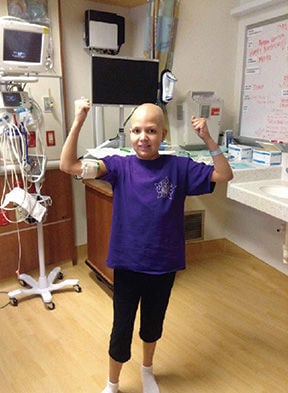 With help from the community, Emily Beazley is staying strong despite grim news about the cancer the 12-year-old from Mt. Greenwood has battled for four years, according to Emily’s mother, Nadia. 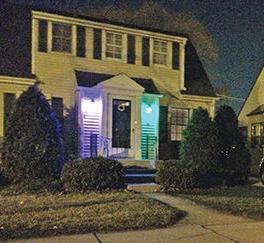 A home on the 10600 block of South Homan Avenue lights up in purple and green in support of 12-year-old Emily Beazley, who lives on 107th and Homan and is battling cancer. The lights are part of a “Light it up for Emily” initiative to show support for the family. (Review photo)

With help from the community, Emily Beazley is staying strong despite grim news about the cancer the 12-year-old from Mt. Greenwood has battled for four years, according to Emily’s mother, Nadia.

A home on the 10600 block of South Homan Avenue lights up in purple and green in support of 12-year-old Emily Beazley, who lives on 107th and Homan and is battling cancer. The lights are part of a “Light it up for Emily” initiative to show support for the family. (Review photo)

Emily Beazley isn’t giving up—and neither are her family and friends, some of them hundreds of miles away.

The 12-year-old from Mt. Greenwood was recently given a grim prognosis for her cancer that she has been battling for more than four years.

Doctors recently found two more “spots”—at the bottom of her heart and near her spine—and they said she’ll never go into remission, her mother, Nadia, said.

Emily believes in miracles, though, Nadia said, and now, neighborhood residents are working to offer more support any way they can.

Throughout the month of April, residents, many of them near the Beazley home on 107th Street and Homan Avenue, are placing purple and green lights outside their homes as part of “Light it up for Emily.”

Organizers have sought to stay out of the limelight, but the efforts are providing a boost to the family, Nadia said.

“The amount of support in this community is amazing,” Nadia said.

A recent trip to the doctor, Nadia said, revealed that chemotherapy had wiped out two spots and part of another on Emily’s heart. Two more spots, however, had emerged, and the family was given the heartbreaking news.

The drive home was sad, Nadia said. Emily, however, insisted to her mother, as well as her father, Ed, that her mindset was clear: “I’m not done.”

That hope is inspired by a family drive through the neighborhood to see all the purple and green lights, Nadia said. The family’s block, as well as several others along Homan Avenue, are lit up, with some homes featuring just green lights, others just purple. One home has an array of green lights covering its entire front.

The support is extending “coast to coast,” Nadia said, as she has seen photos on social media from California and New Jersey of homes lit up.

The local support has amazed Nadia, she said, as some have told her they have “neighborhood envy.”

“Seriously, we live in the best community,” Nadia said.

Emily’s now in the process of creating a “wish list,” with dreams including a trip to Springfield, and meeting music stars Taylor Swift and Maroon 5.

“Those two are her favorites,” Nadia said.

The family is now “just surviving” and taking each day at a time, Nadia said. They wake up and eat breakfast, just because “that’s what you do.”

Emily reminds them, though: “I’m not going to die.”

Emily had that mindset right after the latest news, Nadia said, even saying she would stay in the hospital and take as many of the painful shots as needed to fight the cancer. She only weighs 70 pounds, Nadia said, but her resolve is enormous.

“She has so much life in her,” Nadia said.

The amount of attention pediatric cancer receives also troubles Nadia, she said. According to the American Child Cancer Organization, an estimated 15,780 children in the U.S. 19 and younger are diagnosed with cancer each year; the illness remains the most common cause of death by disease for American children, though.

The Beazleys aren’t the only local family trying to put more focus on pediatric cancer.

In February, the John McNicholas Pediatric Brain Tumor Foundation, named after a North Beverly teen who died of cancer in 2011, released a video featuring other startling statistics: 1 in 330 children will be diagnosed with cancer before age 20; one in five children with cancer will die; no new protocols for pediatric cancer have been developed in 30 years; five times more funds are spent on adult cancer research than are spent on research for pediatric cancer.

While Nadia is most grateful for the financial support the family has received, she feels blessed by the “Light it up for Emily” initiative, she said. Just the act of residents buying a light bulb and installing it has helped the family cope.

The Beasleys and their friends and family are holding out hope, ready to do whatever they need to. Emily is “such a huge presence in our life,” Nadia said, and she’s ready to fight.

“Everyone knows how amazing she is.”

To donate to the Beazley Family, visit emilysentourage.com.

Two Facebook pages have also been set up to support her: “Emily’s Entourage” and “Light it up for Emily.”