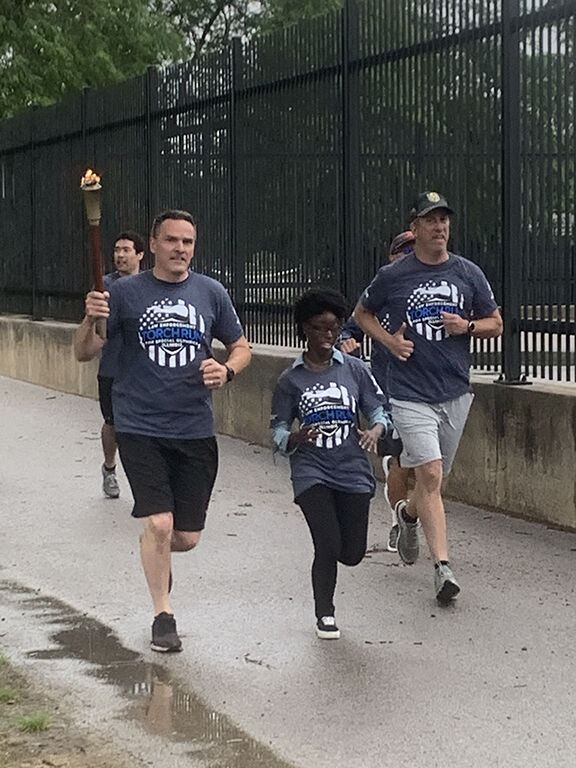 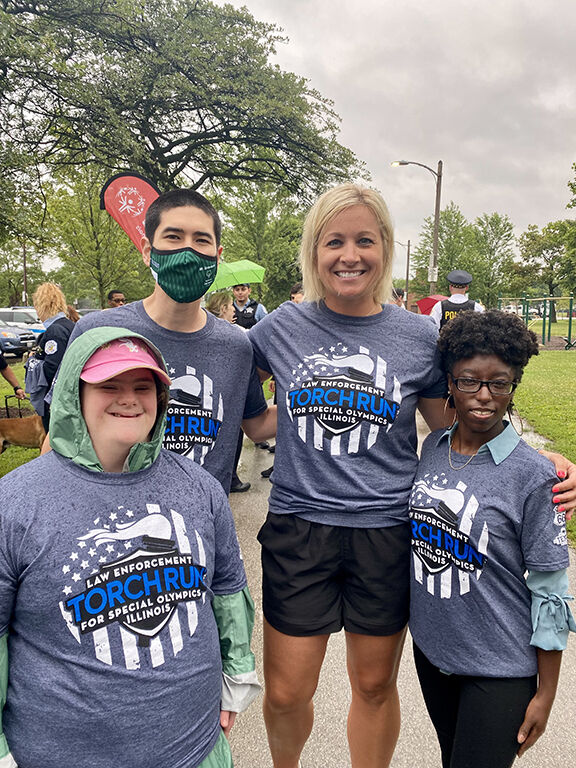 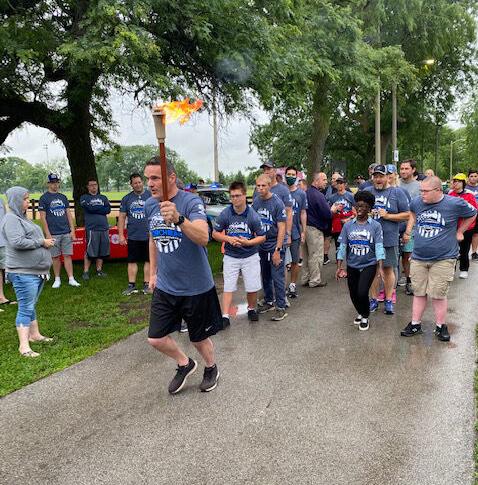 Late last month, more than 100 police officers were at attention as their own children united with Special Olympic Illinois athletes in a hybrid “Torch Run” trot around the lush and spacious Mt. Greenwood Park.

According to Mt. Greenwood Park Supervisor John Foran, it was a great event.

“That was so much fun, and it was so nice to see our special-recreation students again in person because we’ve only seen them on Zoom,” Foran said. “Hopefully, we’ll have our sports and our athletes back in the fall.”

Squeezed in between raindrops on June 24, the run went off at 4 p.m. Runners of all ages, paces and professions toed the starting line dressed in T-shirts that celebrated previous Torch Runs, the Special Olympics’ 50th anniversary and Polar Plunge events.

The drizzle couldn’t dampen the crowd or the hand-held torch that CPD Sgt. Bryan Spreyne hoisted to lead a couple hundred enthusiastic participants through laps, while other police officers and their families cheered on the effort.

It seems that not much can deter Torch Run participants.

“It’s nice to dust off the corona and get our feet on the ground,” said Bill Devine, state director for this year’s Torch Run and a Tinley Park police officer who’s been involved with Torch Run events for 13 years.

Devine’s concerns after a year absence for the Torch Run fundraiser due to the pandemic, diminished as Mt. Greenwood Park’s parking lot filled with patrol cars, supporters and, mostly, Special Olympic Illinois athletes from the area.

Event Coordinator Melissa Garritano, local Special Olympics Illinois director of outreach and a Mt. Greenwood resident, was thrilled with the turnout in light of the public-health crisis and a rain-filled weather forecast.

“These police officers from our area and around the state have accomplished so much with this Torch Run initiative,” said Garritano. “The money raised and the awareness created build proportionately every year.”

The Law Enforcement Torch Run includes an annual intrastate relay conducted by officers representing every branch of law enforcement within the state as well as their federal partners.

Due to the pandemic, the Illinois Law Enforcement Torch Run intrastate relay was held in a hybrid format the week of June 21 in conjunction with the 2021 Special Olympics Illinois Virtual Summer Games.

Since 1986, the Law Enforcement Torch Run has raised more than $59 million while increasing awareness of Special Olympics Illinois athletes and their accomplishments.

The Illinois Law Enforcement Torch Run selected “Guardians of the Flame” as the theme for 2021, and it uses #ILTorchRun21 on social media to inspire law officers and police departments to spread the word about how the Torch Run transforms the lives of Special Olympic athletes throughout Illinois.

Special Olympics transforms the lives of people with intellectual disabilities, allowing them to realize full potential in sports and in life. Special Olympics programs enhance physical fitness, motor skills, self-confidence and social skills, and they encourage family and community support.

To support the Illinois Torch Run and Special Olympics Illinois, visit the website at soill.org.