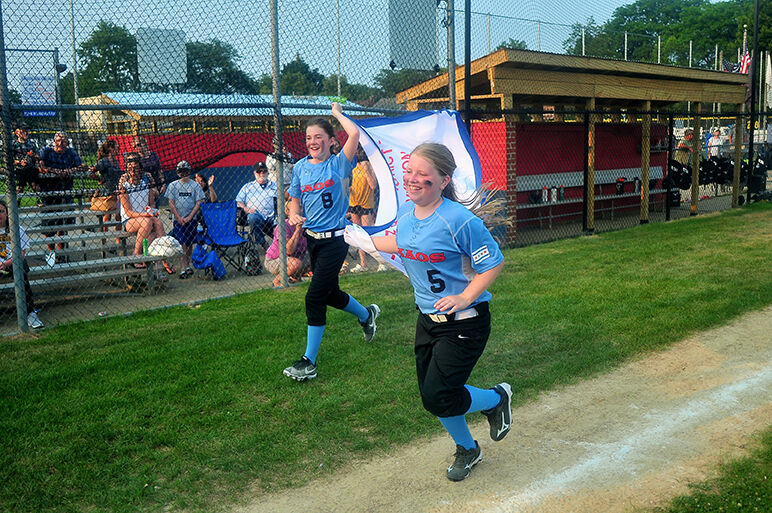 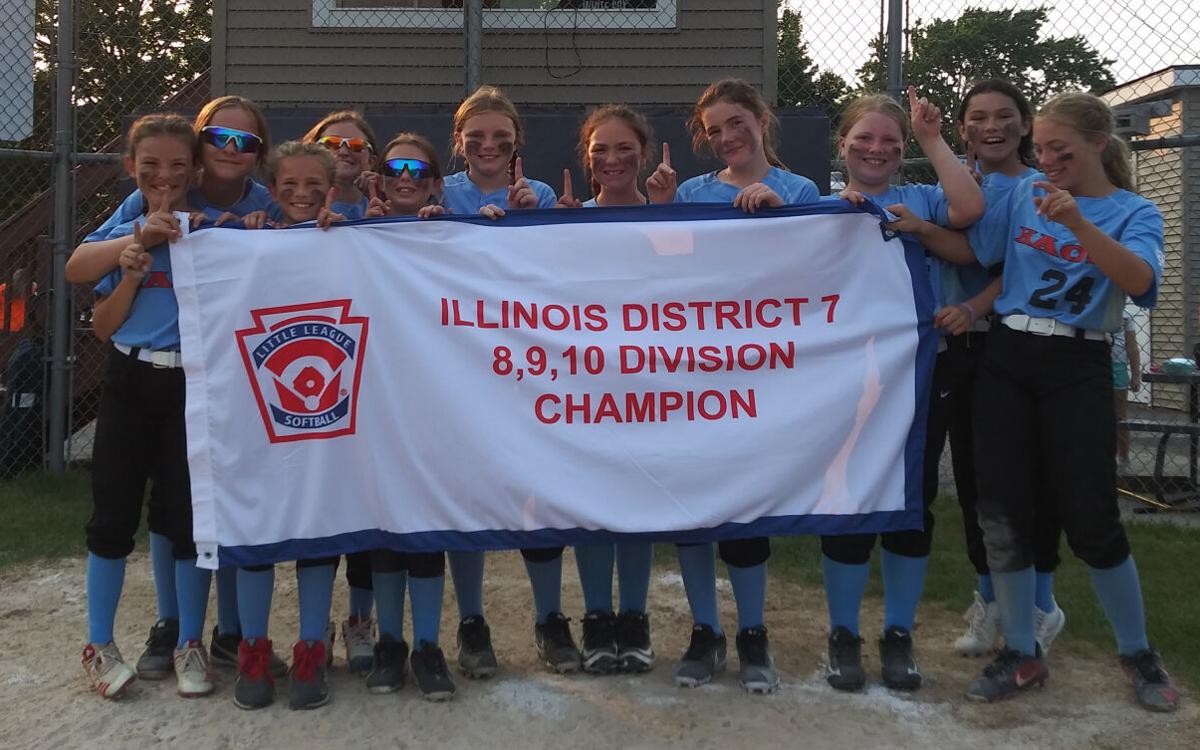 The Kennedy Park 10U softball team celebrates its victory over Ridge Beverly in the district championship at East Side Little League fields. KP advanced to the state tournament in Beardstown. (Review photo) 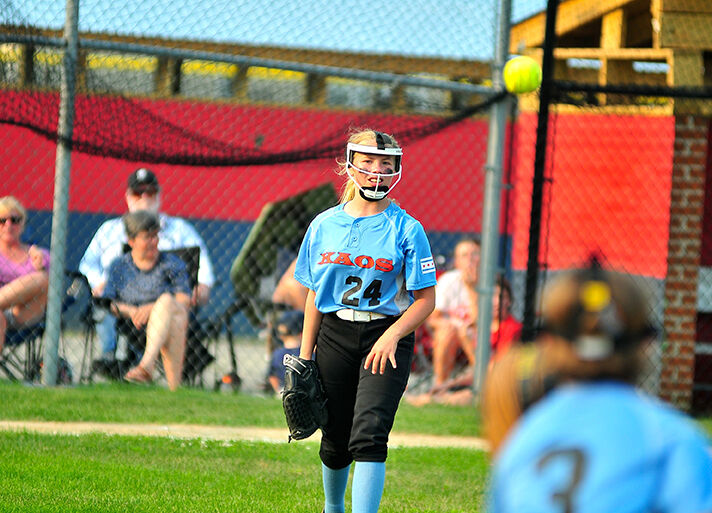 Kennedy Park pitcher Violet Schlitz fires a throw to first in the third inning. Schlitz struck out 4 batters in three innings to help lead KP to the win. (Review photo) 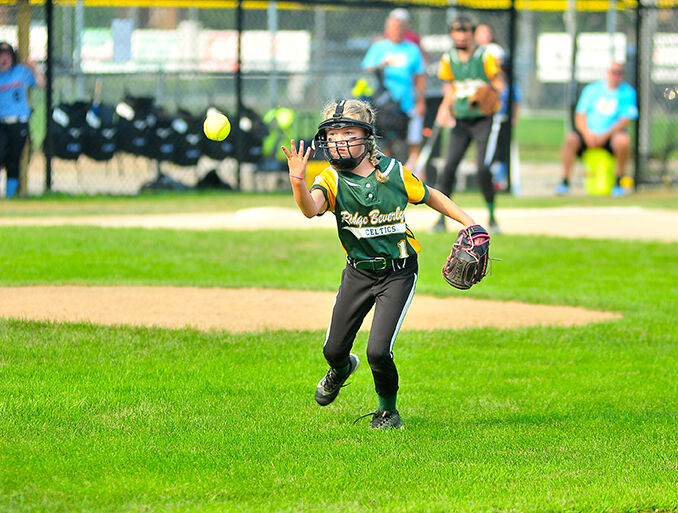 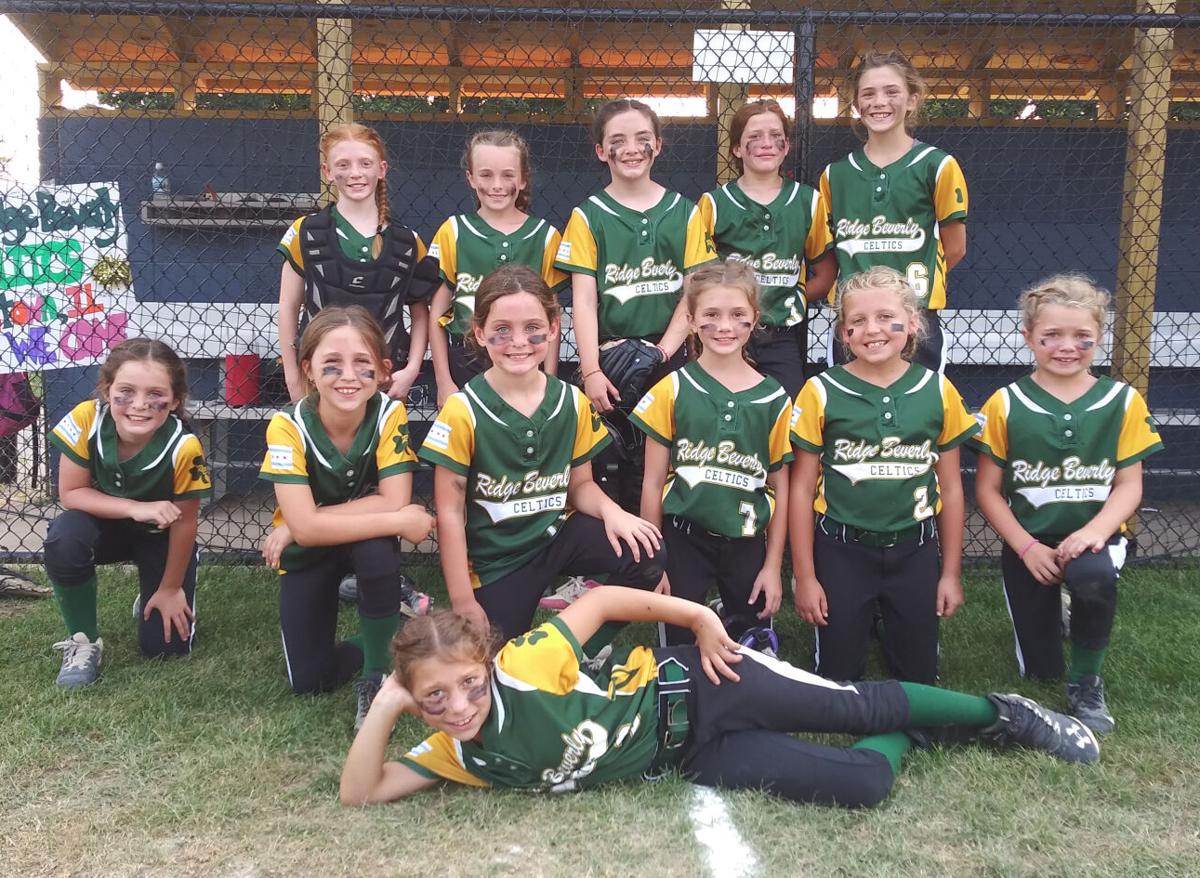 The Kennedy Park 10U softball team celebrates its victory over Ridge Beverly in the district championship at East Side Little League fields. KP advanced to the state tournament in Beardstown. (Review photo)

Kennedy Park pitcher Violet Schlitz fires a throw to first in the third inning. Schlitz struck out 4 batters in three innings to help lead KP to the win. (Review photo)

Coaching a first-year softball program for Kennedy Park Little League, Randy Pochie has seen plenty of improvement from his players this summer.

The pitchers have shown continued development; the fielders are chasing down balls; and the lineup keeps on hitting.

Pochie hopes that is just the start for Kennedy Park softball.

Playing rival Ridge Beverly (RB) on July 19 at the East Side Little League Fields for the District 7 championship, the Kennedy Park (KP) Kaos 10U team claimed a convincing 18-3 victory in three innings to advance to the state tournament.

“The girls are doing phenomenal. They’re all very coachable, and they all have a great passion for the sport, which you love to see,” Pochie said. “It’s a great honor to win district. For a first-year start-up organization, that’s pretty cool.”

KP advanced to the state tournament in Beardstown with games beginning July 12. The 12-team tournament featured pool play with the top 8 teams advancing to a single-elimination format.

The Kaos lost its first two tournament games to host Beardstown and then to Northwest to end its season.

On its way to the district championship, KP defeated East Side 20-2 on July 15 but lost the next day 13-8 against Ridge Beverly.

Kaos regrouped with a win in the loser’s bracket, beating East Side 20-1 on July 17 and then defeating RB on July 18 to force the winner-take-all championship game.

“We came back from a heart-breaker, a loss to RB where we let it slip away ultimately,” Pochie said. “We come back and ultimately win it in dominant fashion. That’s pretty cool.”

Kaos left no doubt early on with 6 runs in the bottom of the first of the championship, courtesy of 2 hits and 5 walks.

Brooke Duleba, Ryann Nolan, Gabby Albarran and Natalie Murray had a RBI apiece as part of the early offensive outburst.

KP tacked on 7 runs in the second with Violet Schlitz, Mia Bernard, Mae Slattery and Albarran knocking in a run apiece.

Pochie said he and his coaching staff have preached using efficient, quick swings at the plate and putting pressure on defenses to react.

“The lineup is formidable from one through 14,” Pochie said. “There aren’t many weak spots where the opposing pitcher can take a breather. Our pitching will keep us in games, but our hitting will win us championships.”

In the circle, Schlitz allowed 3 runs on 2 hits and 3 walks with 4 strikeouts to earn the win. Sclitz also pitched well in the earlier win over RB.

Pochie has seen some impressive growth over the last two seasons in the program with numbers increasing, a trend he hopes to see continue in the coming years.

“Our hitting has been good, and we’re seeing some good glimmers with the pitching,” Pochie said. “This is a good neighborhood rivalry. It can get heated at times, but they’re a phenomenal team with great players. I have the utmost respect for their coaches and players.”

Even with the tough loss, RB Coach Randy Ashley loved the fight his team showed.

Like KP, RB is looking to build up its softball programs for area athletes.

“This is the first year that RB had a flex team at each level,” Ashley said. ‘We really put an emphasis on softball this year. We can thank Mo O’Hara and John O’Connor for making softball a priority for these girls. This year was much bigger than this tournament. It was building a program and coming back next year with girls who gained experience this year.”

Jason Fennell and Peter McGlynn are the team’s assistant coaches.

Ashley said about 125 girls participate in the softball program.

“It’s a good start. I wouldn’t be surprised if we increased that number by quite a bit next year, especially after making the championship,” Ashley said. “Win or lose, this builds character. We want to build on the foundation. It’s that softball at RB can be taken seriously and put us on the map.”