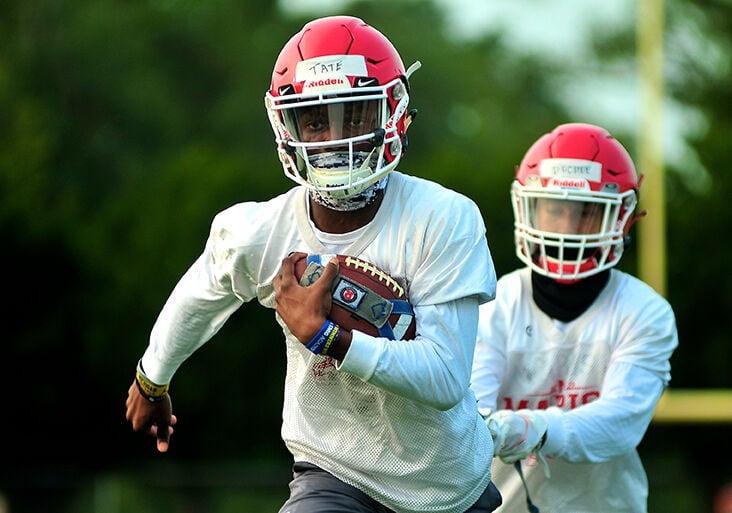 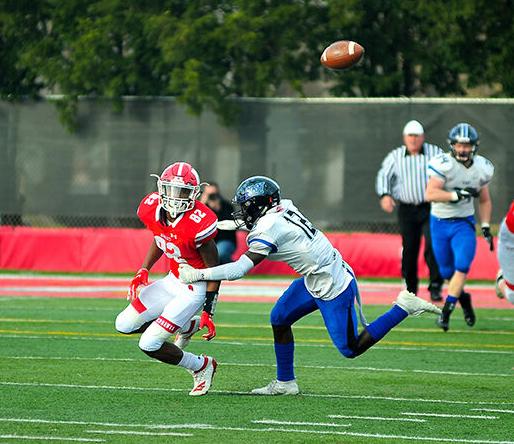 Marist wide receiver Carnell Tate looks to make a catch in the state semifinal matchup against Lincoln-Way East in 2019. Tate had 28 catches for 444 yards and 5 touchdowns in his freshman year. He recently transferred to IMG Academy, a preparatory and sports training boarding school. (Review file photo)

Marist wide receiver Carnell Tate looks to make a catch in the state semifinal matchup against Lincoln-Way East in 2019. Tate had 28 catches for 444 yards and 5 touchdowns in his freshman year. He recently transferred to IMG Academy, a preparatory and sports training boarding school. (Review file photo)

One of the top high school football recruits in the Class of 2023, Carnell Tate faced a difficult decision.

He could remain at Marist High School or transfer to IMG Academy in Bradenton, Fla.

Both had advantages, but as Tate decides where to attend college, he said transferring to IMG Academy was the best option.

He announced his transfer on Twitter on Jan. 14 and is now enrolled at IMG, a preparatory and sports training boarding school.

“It was definitely a tough decision. It’s been great at IMG,” Tate said. “Transferring to IMG, it’s getting ready for the next level and having that college lifestyle.”

Tate, a 6’2”, 175-pound wide receiver, was in his sophomore year at Marist. Already, this highly sought after recruit has double-digit offers from some of the top football programs in the country, including the University of Notre Dame.

He recently received offers from Arizona State and Oregon State.

IMG Academy was established in 1978 as a tennis academy and has since grown into one of the premier boarding schools in the country.

Tate made the decision just weeks before the Illinois Department of Public Health announced lower health restrictions in the fight against the coronavirus, potentially allowing a football season in Illinois. Then, on Jan. 27, the Illinois High School Association announced that a six-week football season will be conducted mid-March through April.

While Tate said it was a tough decision, he doesn’t regret transferring, even after the football schedule was announced only weeks later.

“Ultimately, we just didn’t know what decision would be made,” Tate said. “It could have been pushed back again. IMG helps me prepare for the next level faster. It was a tough decision, but no regrets. It was the right decision for me. I’m glad with what I chose.”

Marist Coach Ron Dawczak said he’s sorry to see Tate go, but he understands the decision of this rising star.

“You hate to see a kid of his caliber leave, and that’s not just a football statement,” Dawczak said. “Carnell is a great kid. We wish him well. I hope he does great things down there and achieves every goal he sets for himself.”

Tate was a midseason call-up to the varsity for Marist in 2019 as a freshman.

He finished that season with 28 catches for 444 yards and 5 touchdowns as the RedHawks advanced to the state semifinals.

The IMG Ascenders play some of the best teams in the country. In 2020, the team finished 8-0.

Now making his way through the spring semester at IMG, Tate has a day-to-day schedule more like that of a college student-athlete. He lives in a dorm on a campus that features a cafeteria, a library and other amenities.

He balances his class schedule of literature, history, chemistry, math and Spanish and then trains with his teammates on strength and conditioning after classes.

Tate said spring break has been canceled due to health precautions, and he will come home to Chicago for the summer.

“Right now, we’re doing strength and conditioning and running,” Tate said. “We’re doing field work, the wide receivers and defensive backs, working out five days a week and lifting some on the weekend. I’m loving it.”

As for choosing where to go to college, Tate’s in no rush.

“Yeah, nothing right now,” he said, “that’s down the road. I’m looking forward to playing at IMG next fall.”