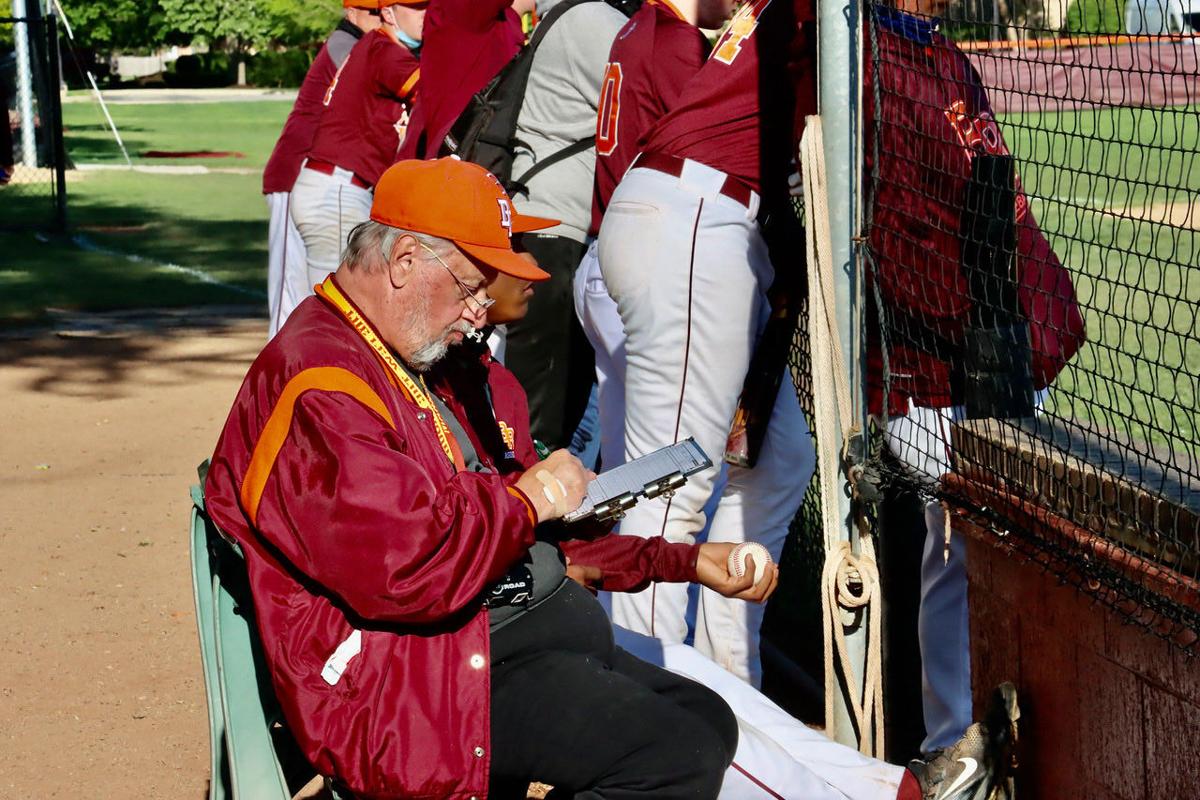 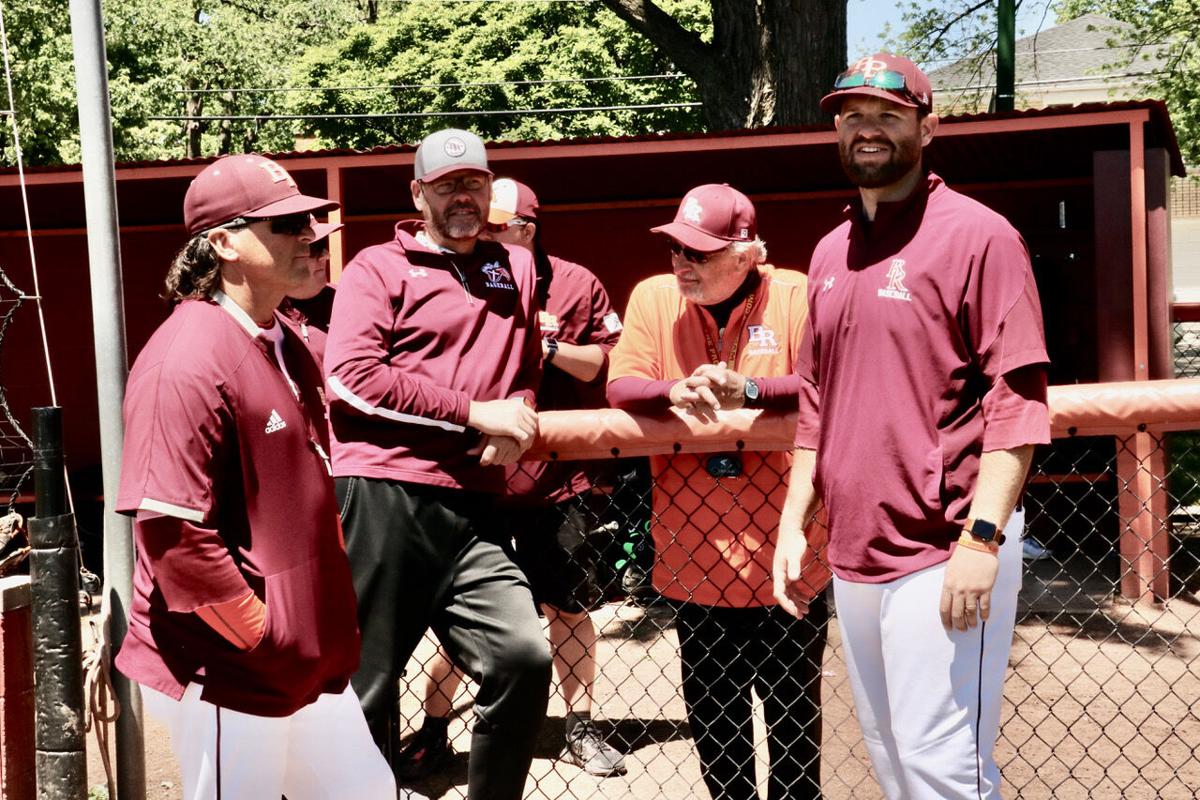 Mike Minervini (second from right) talks in the dugout prior to a game this spring with Assistant Coach Anthony LaCoco (from left), Principal Bob Alberts and Head Coach Sean McBride. Minervini started keeping stats for the Br. Rice basketball team in the early 1990s, adding football and baseball over the years. (photo courtesy of Br. Rice) 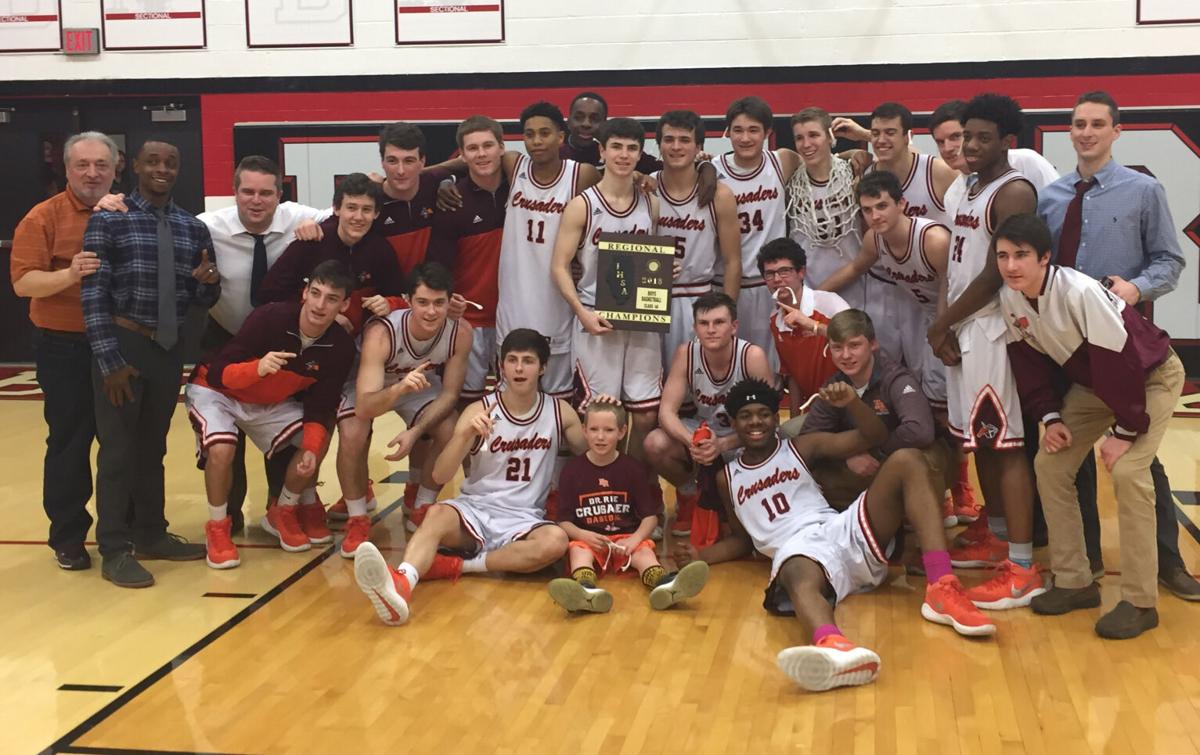 Mike Minervini (left) celebrates Br. Rice’s regional championship win in 2018. Minervini was a staple at the scorer’s table for Crusaders home games over the years, keeping the official book, and also traveling to road games with the team. (photo courtesy of Br. Rice)

Mike Minervini (second from right) talks in the dugout prior to a game this spring with Assistant Coach Anthony LaCoco (from left), Principal Bob Alberts and Head Coach Sean McBride. Minervini started keeping stats for the Br. Rice basketball team in the early 1990s, adding football and baseball over the years. (photo courtesy of Br. Rice)

Mike Minervini (left) celebrates Br. Rice’s regional championship win in 2018. Minervini was a staple at the scorer’s table for Crusaders home games over the years, keeping the official book, and also traveling to road games with the team. (photo courtesy of Br. Rice)

Richardson described Minervini as a stat guru, a smiling, calming presence, an encyclopedia of knowledge, a good friend and, for Br. Rice sports, irreplaceable.

Minervini, the legendary Br. Rice statistician for basketball, football and baseball for the last 30 years, died July 11 at the age of 73.

“Mike was all about Br. Rice. He was our guy,” Richardson said. “I always said it. You can replace any coach. You can replace your best player. But, the one guy who can never be replaced, that’s Mike. You could have a dozen people, and they still couldn’t do it.”

Raising his family in suburban Hometown, Ill., he worked for 26 years with the Chicago Transit Authority as an IT systems analyst. After retiring from the CTA, Minervini began his second career as a statistician and assistant coach at Br. Rice.

It all came about when Minervini’s son, Mike, was on the freshman B basketball team at Br. Rice. Bob Alberts, the current principal at Br. Rice, was the team’s coach. He put out a call for someone to keep stats.

The junior Mike Minervini spoke up, saying his dad would volunteer for the job.

According to Alberts, the rest is South Side sports history.

“Mike said that his dad would love to do it,” Alberts said. “At the end of the year, he gave us this book of stats showing our record when we were winning after the first quarter, our free-throw percentage, just absolutely everything. I showed Coach Richardson, and he said, ‘Oh, we need him on my staff.’”

It wasn’t long before Minervini was keeping stats for the Crusaders varsity team. Richardson remembers when he officially took over as the stat man, at first filling in at the Carbondale holiday tournament when the team’s statistician couldn’t make the game because his van broke down.

Minervini stepped in and never looked back.

“Mike would go above and beyond every single time,” Richardson said. “He didn’t mind. He was a real help to everyone at Br. Rice. You’d talk to him and feel like you knew him forever.”

Richardson said stat books compiled by Minervini became the stuff of legend. He would compile an outstanding amount of stats, and in a pre-internet world, he’d deliver them to Richardson’s house early the next morning.

“Mike would deliver them Saturday morning, just put it inside the door. He was stealthy,” Richardson said. “There they were, though, the packet of stats. At one point, he had compiled 15 years worth of stats; rebounds, turnovers, who made more free throws. He said that over those 15 years, if we outrebounded the other team, committed less turnovers and made more free throws, we went undefeated over those 15 years. It was nuts.”

As the stat encyclopedia grew over the seasons, Minervini’s work became must-read on the game-day programs, including everything from rivalry win-loss records to the crazy streaks of games with a made 3-point shot.

“I’d be sitting at the scorer’s table for our sophomore games. Everybody in the gym was reading Mike’s ‘Did You Know?’ trivia on the programs,” Richardson said. “It was like a library.”

Br. Rice Coach Bobby Frasor played for Richardson in the early 2000s before going on to play at the University of North Carolina, including winning the National Championship in 2009.

Frasor said he clearly remembers attending Br. Rice games when he was in elementary school and seeing the wealth of stats that Minervini had compiled in published in books and programs for spectators.

“I was amazed looking at the Br. Rice record book,” Frasor said. “There’s so many stats, 3-pointers, points, assists, rebounds, blocks, and it’s like you touch the record, like a media guide. Those blasts from the past were really cool.”

When Frasor was being recruited by UNC, the sports information director (SID) reached out to Richardson for some help with stats. Richardson sent back a book of Frasor’s high school stats.

“We sent a pack of stats Mike had compiled,” Richardson said. “Their SID answered, ‘This is unbelievable. I’ve never seen anything like that.’ Mind you, this is UNC! He asked what software Mike uses. No software, just his head.”

Minervini’s impressive stat-taking ability wasn’t limited to just basketball. He began keeping football stats when Coach Steve Nye took over the program in the late 1990s and then the baseball team when Coach Tim Lyons took over in 2000.

He compiled stats through the 2020-21 season when all three sports were played in a span of five months in winter and spring. In one unique opportunity, courtesy of the rearranged schedule, Minervini was able to keep score for a baseball game and then complete a unique doubleheader by working a football game.

“I introduced myself, and Mike said, ‘Sandburg, 2001 basketball! I said ‘Jesus, how do you know that?’” McBride said with a laugh. “That’s Mike in a nutshell. The amount of knowledge he had and his ability to remember things, to be a part of the team, he was great—one of a kind.”

Minervini’s amazing ability to retain information always came in handy in the sports world, but especially during baseball season.

“Mike would read the rule book cover to cover,” McBride said. “He knew everything, and we’d look to him sometimes like ‘Is that right?’ He did it all. He’d greet the umps, get their cards, and I’d give him our lineup. He took score, kept the pitch count, charted every pitch and every stat. If you needed anything, he was on it like that.”

Minervini was also an avid collector of sports memorabilia, compiling programs, magazines, pennants and much more in his basement man cave.

However, he wasn’t just a sports nut. Above all else, Minervini was a family man who enjoyed spending time with his wife, children and grandchildren.

“Mike loved his kids so much and would always talk about them,” McBride said. “He was so proud of his kids and grandkids. They don’t make them like Mike anymore. He was so old-school and just had a love of the kids and Br. Rice.”

With a new baseball stadium to be built on campus for the start of the 2023 season, McBride said, plans are already in motion to honor Minervini.

“Nothing is finalized yet, but I’d like to put a bench in the dugout with his name on it,” McBride said. “We’ll have his name on our jerseys this year. Mike just loved when the weather turned and he could be out at a baseball game. I have a great respect for what he did. He’s irreplaceable.”

As Alberts said, the athletic events without Minervini in 2021-22 will take some getting used to.

“Whatever Mike did, he did 1,000 percent, whether for his family, his kids or as a coach,” Alberts said. “He made everyone’s job a lot easier. He was one of a kind. They broke the mold after Mike.”