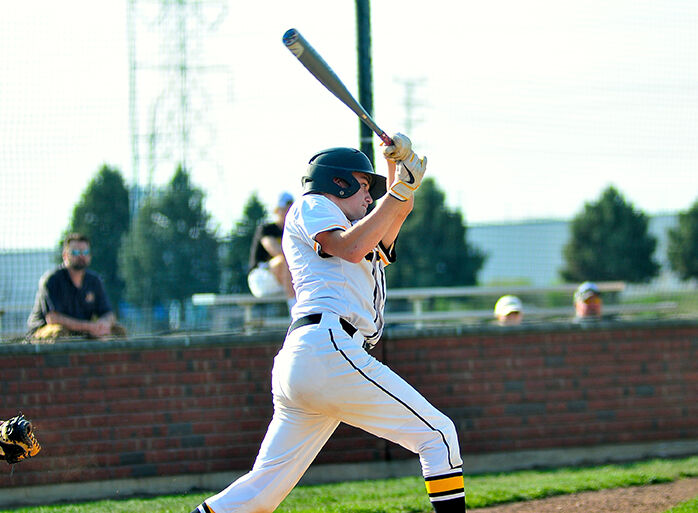 St. Laurence senior first baseman Kevin McCormick connects on a pitch in the third inning. McCormick finished with a RBI and 2 runs scored in a Chicago Catholic League crossover against Montini. (Review photo) 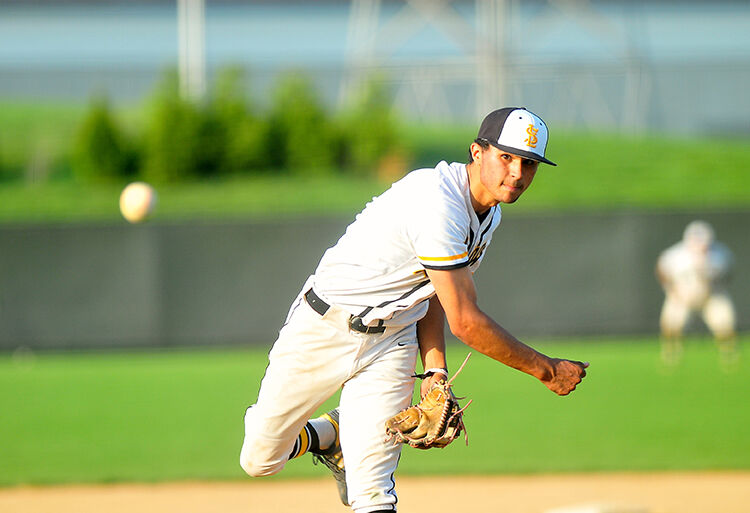 St. Laurence senior starter Mike Laudando works in the middle innings against Montini. Laudando struck out 8 in 6.1 innings and also had 2 hits and scored a run. (Review photo) 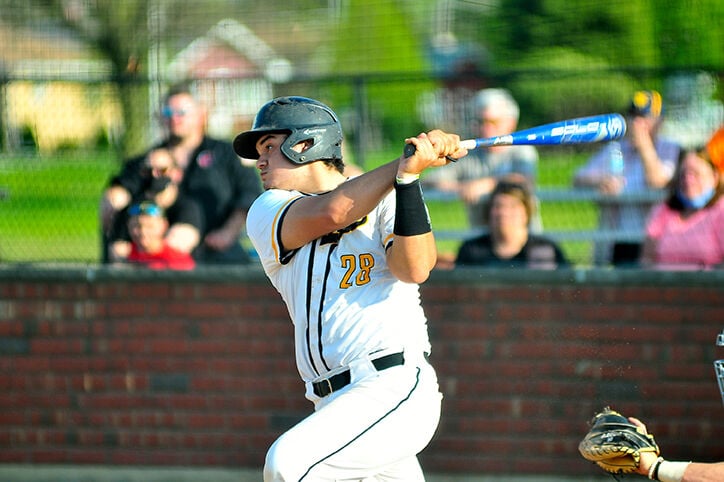 St. Laurence senior catcher Jason Krol looks to do damage at the plate in the late innings. Krol knocked in 2 runs against Montini. (Review photo)

St. Laurence senior first baseman Kevin McCormick connects on a pitch in the third inning. McCormick finished with a RBI and 2 runs scored in a Chicago Catholic League crossover against Montini. (Review photo)

St. Laurence senior starter Mike Laudando works in the middle innings against Montini. Laudando struck out 8 in 6.1 innings and also had 2 hits and scored a run. (Review photo)

St. Laurence senior catcher Jason Krol looks to do damage at the plate in the late innings. Krol knocked in 2 runs against Montini. (Review photo)

As a sophomore two years ago, Kevin McCormick was a solid hitter for a St. Laurence squad that finished as the Class 3A state runner-up.

He played behind a strong senior class, including his West Virginia-bound brother, Matt, and soaked it all in.

Now in his senior year, McCormick is looking to make the most of his time as a leader with a young team.

“I’ve always tried to go into that role as a leader. Even as a young kid playing hockey, I was a captain,” McCormick said. “Last year, I thought I’d be able to learn from Alex Gasbarro and Matt Zahora. Now, I’m doing as much as I can and learning how to get these guys going as a team.”

McCormick knocked in a run and scored 2 runs on April 27 as host St. Laurence lost a tough 8-7 game in 8 innings to Montini in a Chicago Catholic League (CCL) crossover.

The Vikings finished with 10 hits and drew 4 walks and 3 hit batsmen but were undone by base-running mistakes, 3 errors and a defensive mistake in the eighth.

Returning to the field following the Montini loss, St. Laurence defeated Fenwick 17-0 and De La Salle 13-3. The Vikings were scheduled to open CCL-Blue play on May 3, after press time, with a home game against Mt. Carmel.

As the Vikings head into their CCL-Blue schedule, a young roster can rely on McCormick and fellow seniors Jason Krol and Mike Laudando to help lead the way.

McCormick (Orland Park) and Krol were both on the 2019 runner-up team.

Senior leadership is especially important as the rest of the team’s juniors and sophomores are making their varsity debuts after missing out on their 2020 spring season due to the pandemic.

“Kevin knows everything we do and the expectations we have,” Lotus said. “He was a major part of that downstate run. He’s really good with the younger guys and talks a lot. The same thing with Jason with the catching. Jason’s been really good catching. Both those guys played in state games.”

McCormick, an Evansville University recruit, has embraced the leadership role.

“You’ve got to be vocal. You can’t be a quiet guy,” McCormick said. “You need the younger guys to buy in. You need to perform yourself, too. You do what you’re supposed to, and they’ll follow.”

McCormick’s RBI single in the fifth scored Laudando to put St. Laurence up 4-2. The Vikings scored 4 runs in the fifth, including RBI from Angelo Luna and Jimmy Gurgone.

St. Laurence went up 6-2, but Montini responded, scoring 3 in the first and 2 in the seventh. Down 7-6 in the bottom of the seventh, the Vikings forced extra innings with a Krol RBI groundout.

Montini scored in the eighth on a double-steal attempt, the runner stopping between first and second and drawing a throw to allow the runner from third to score the eventual game-winner.

St. Laurence was picked off on the bases twice and caught stealing twice.

“We did some uncharacteristic things, especially after the last week where we played pretty well,” Lotus said. “We hit the ball fine, but we made some mistakes that can’t happen if we want to win games. Hopefully, we can learn from that.”

Laudando has been a dual-threat player for the Vikings as a shortstop who leads off and a go-to pitcher on the staff.

Against Montini, the 6’3” righty went 6.1 innings, allowing 6 runs on 6 hits with no walks and 8 strikeouts. He also reached base 3 times with 2 hits and a run scored.

Laudando transferred to St. Laurence from St. Joseph for his senior year when his family moved to Burbank.

“I feel like it was the best thing for me, especially academically,” Laudando said. “I wanted to have my last year be a year where I could compete and maybe have a shot at winning state.”

Laudando gave up 2 home runs on a windy day but was dominant in stretches against the Broncos.

Mixing in his curveball, changeup and fastball, Laudando said it was a solid start.

“I missed some pitches that cost me. Other than those, I felt good,” he said. “I felt good. My arm is feeling really nice. I haven’t had any problems.”

Lotus has been impressed with Laudando’s contributions.

“Mike’s been great for us,” Lotus said. “Hitting leadoff, he’s getting on base and stealing bases for us. Pitching-wise, he’s been really good. Those middle innings, he was tremendous with a ton of strikeouts. He made some good pitches.”