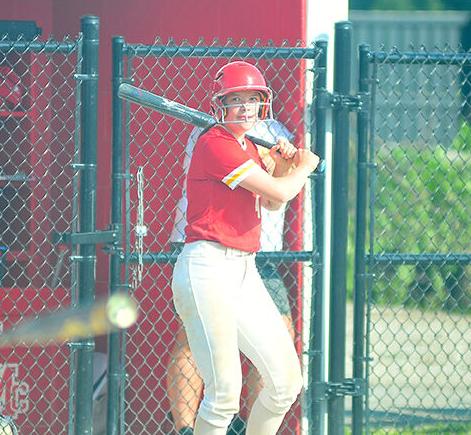 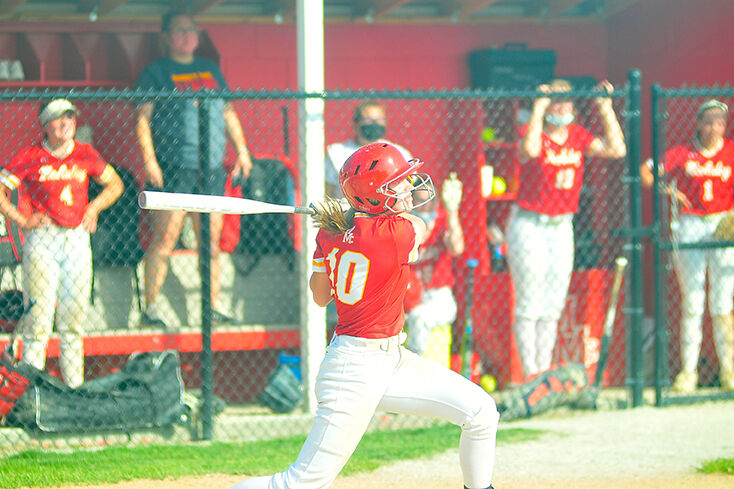 Junior shortstop Mary Charniak connects for a 2-run triple in the second inning. Charniak scored on the play after a Stagg error. Mother McAuley scored 6 runs in the second frame. (Review photo) 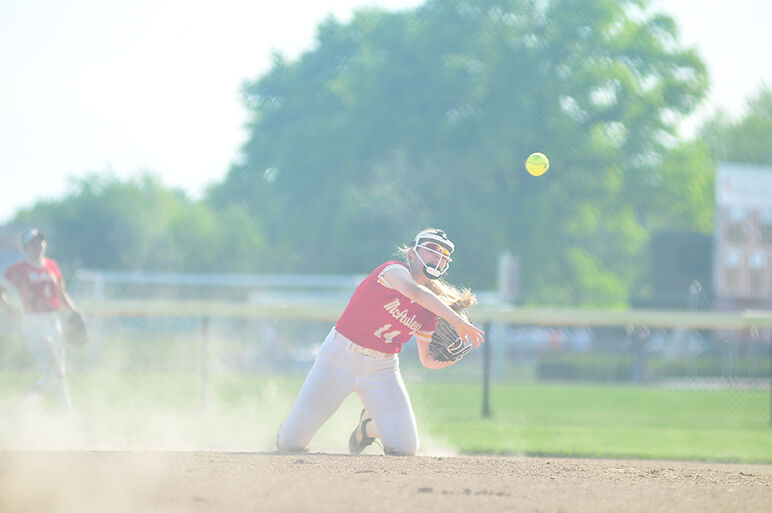 Sophomore second baseman Lillia Benoit fires to first for the out after making a diving stop in the infield. Benoit added 2 hits and 2 runs for the Mighty Macs. (Review photo) 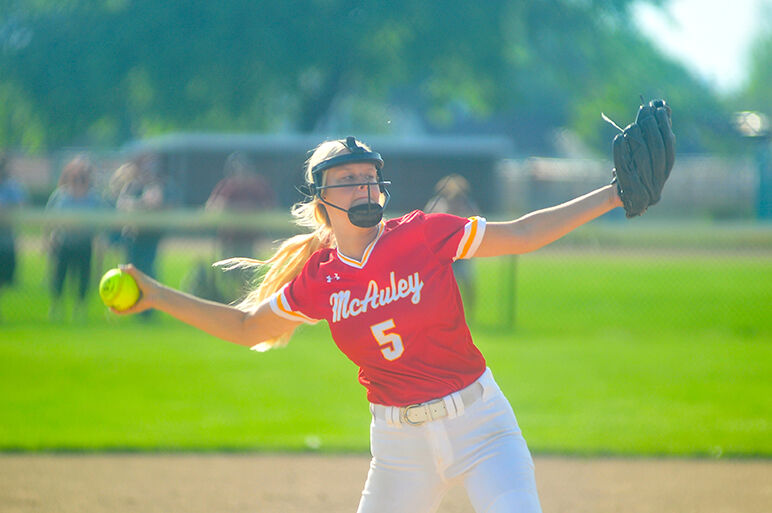 Mother McAuley senior Grace Odenbach delivers a pitch in the later innings. Odenbach earned a complete-game win over Stagg in the regional semifinals, giving up 3 runs on 7 hits. (Review photo)

Junior shortstop Mary Charniak connects for a 2-run triple in the second inning. Charniak scored on the play after a Stagg error. Mother McAuley scored 6 runs in the second frame. (Review photo)

Sophomore second baseman Lillia Benoit fires to first for the out after making a diving stop in the infield. Benoit added 2 hits and 2 runs for the Mighty Macs. (Review photo)

Mother McAuley senior Grace Odenbach delivers a pitch in the later innings. Odenbach earned a complete-game win over Stagg in the regional semifinals, giving up 3 runs on 7 hits. (Review photo)

As the lead-off hitter for Mother McAuley, junior center fielder Fiona Crane doesn’t feel much pressure when she steps to the plate.

She’s just looking to get on base and do some damage.

Well, OK, maybe she feels a little pressure because, after all, she wants to jump start the Mighty Macs’ offense every time she’s at the plate.

“Sometimes,” Crane said with a laugh. “I feel like I set the tone. If I get on, my teammates think, ‘OK, I can do that.’ If I’m out, I might kill that momentum, so there is a little pressure.”

Crane’s hot hitting was a huge factor for a Mother McAuley squad that over the last month-plus has turned things around in a big way.

Facing Stagg on June 2 in a Class 4A regional semifinal, Crane ripped 2 hits and scored 2 runs as host Mother McAuley rolled to a 13-3 win in 5 innings.

The Mighty Macs advanced to play three-seed Downers Grove South on June 3 in the regional championship game, but they dropped an 8-7 heartbreaker to end the season.

In the South loss, McAuley fell behind 5-2 in the third but rallied with big innings in the fourth and fifth.

The Macs stranded 10 runners in the season-ending loss.

Prior to the season, McAuley Coach Kathleen Mixan talked with Crane about the junior potentially becoming the team’s leadoff and if she would be up for the challenge.

“Fiona said, ‘Yeah, definitely!’” Mixan said. “Our girls rely on her a lot. She’s stepped into that role nicely. There was a stretch where she wasn’t getting on but hitting the ball well. Now, it’s all clicking. If she gets on base, we score.”

After a steal and a wild pitch moved her to third, Crane was called out at home on a questionable call on an Emily DuMais fielder’s choice.

However, the Macs weren’t done, regrouping to score 3 runs in the bottom of the first, including DuMais scoring on a Stagg error, Lillia Benoit coming home on Aaliyah Walker fielder’s choice and Emily O’Loughlin hitting a RBI single through the infield to score Walker.

McAuley was off and running, sending 10 batters to the dish in a 6-run second.

Sophomore shortstop Mary Charniak highlighted the second-inning outburst with a 2-run triple to right-center field. Charniak capped off the little league home run by scoring on a Stagg error at third.

“I don’t remember the count, but I saw the ball hit the gap and get past her, so I turned on the wheels,” Charniak said. “I didn’t slide. I stood up but probably should have slid. Mixan was yelling, ‘Go, go, go!’ when the throw went right past third base.”

Mother McAuley finished with 12 hits against Stagg and capitalized on 4 wild pitches and 3 errors.

Charniak said a team-wide shift to focusing on offense has paid big dividends.

“Our approach at the plate has changed a lot since the beginning of the season,” Charniak said. “We were timid, even scared in the beginning. We’re all ready to hit now. We’ve all found our rhythm.”

After struggling to find a team identity in the early weeks of the season, Crane has enjoyed being a part of the team’s turnaround.

“We started playing together as a team,” Crane said. “If you’re having a good or bad game, we have each other’s back and work together. It was a gradual process. We’re all hitting and staying energetic in the dugout.”

In the circle against Stagg, senior pitcher Grace Odenbach earned the win, allowing 3 runs on 7 hits and a walk with 1 strikeout in 5 innings.

She pitched out of a jam in the first with runners at second and third, inducing a popout to second and a grounder to third to end the threat.

“I wanted to really hit my spots and be there for my team,” Odenbach said. “Our defense is strong. I knew they’d be there to back me up. We’ve had a lot of errorless games recently. I felt good today. I felt confident.”