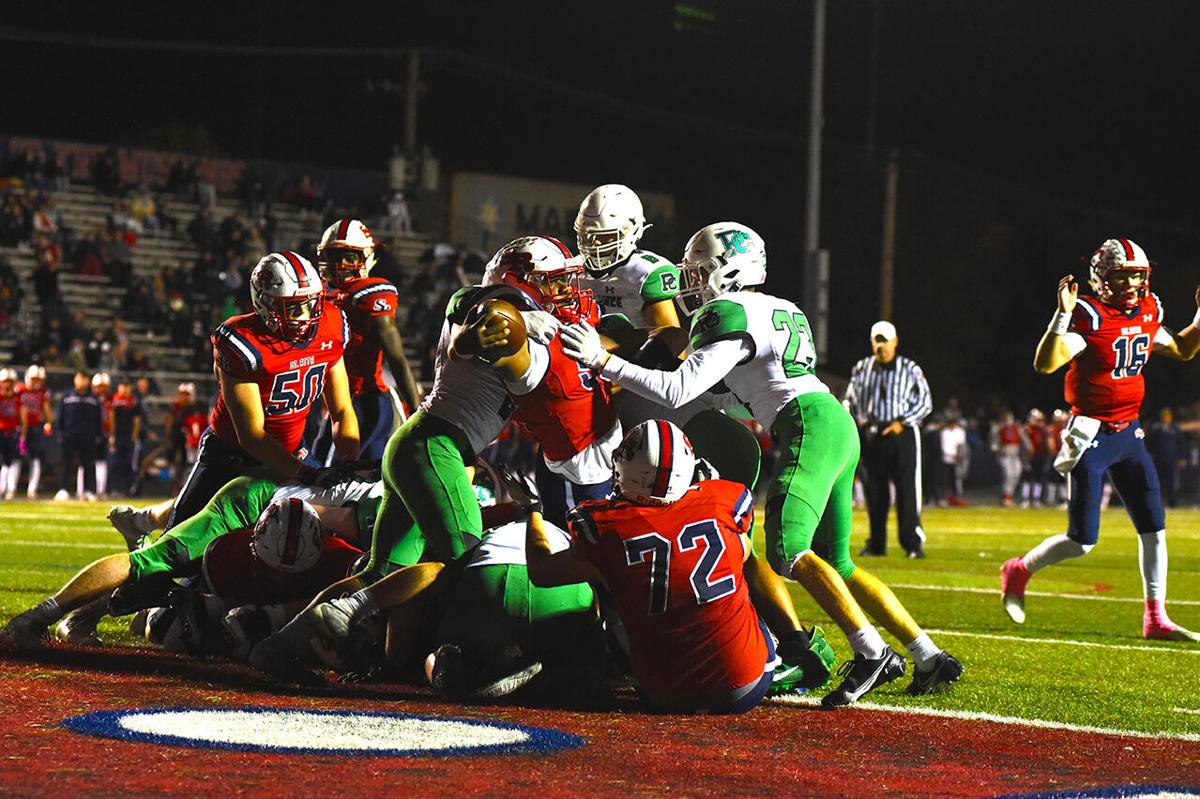 St. Rita senior Djabril McNabb fights his way into the end zone for a 1-yard touchdown to start the second quarter. A standout defensive lineman for the Mustangs, McNabb was allowed to play running back on one play against Providence. (Review photo) 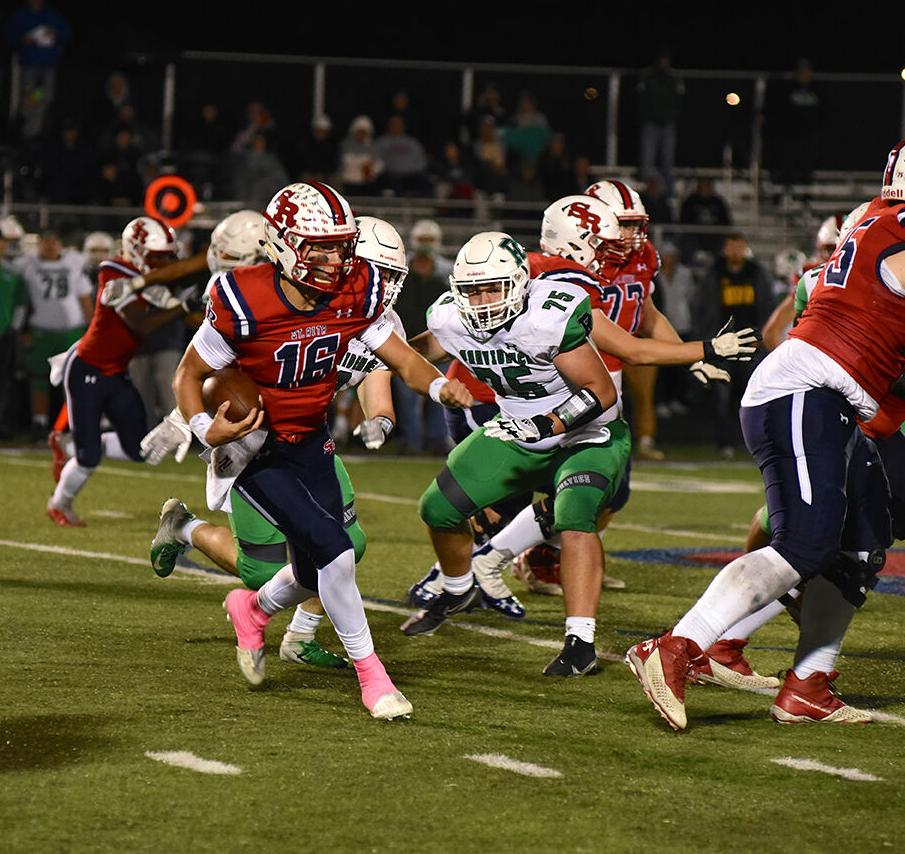 St. Rita senior quarterback Tommy Ulatowski carries the ball in the first half for the Mustangs. Ulatowski rushed for a score and also threw for 2 touchdowns in a blowout win over Providence Catholic. (Review photo) 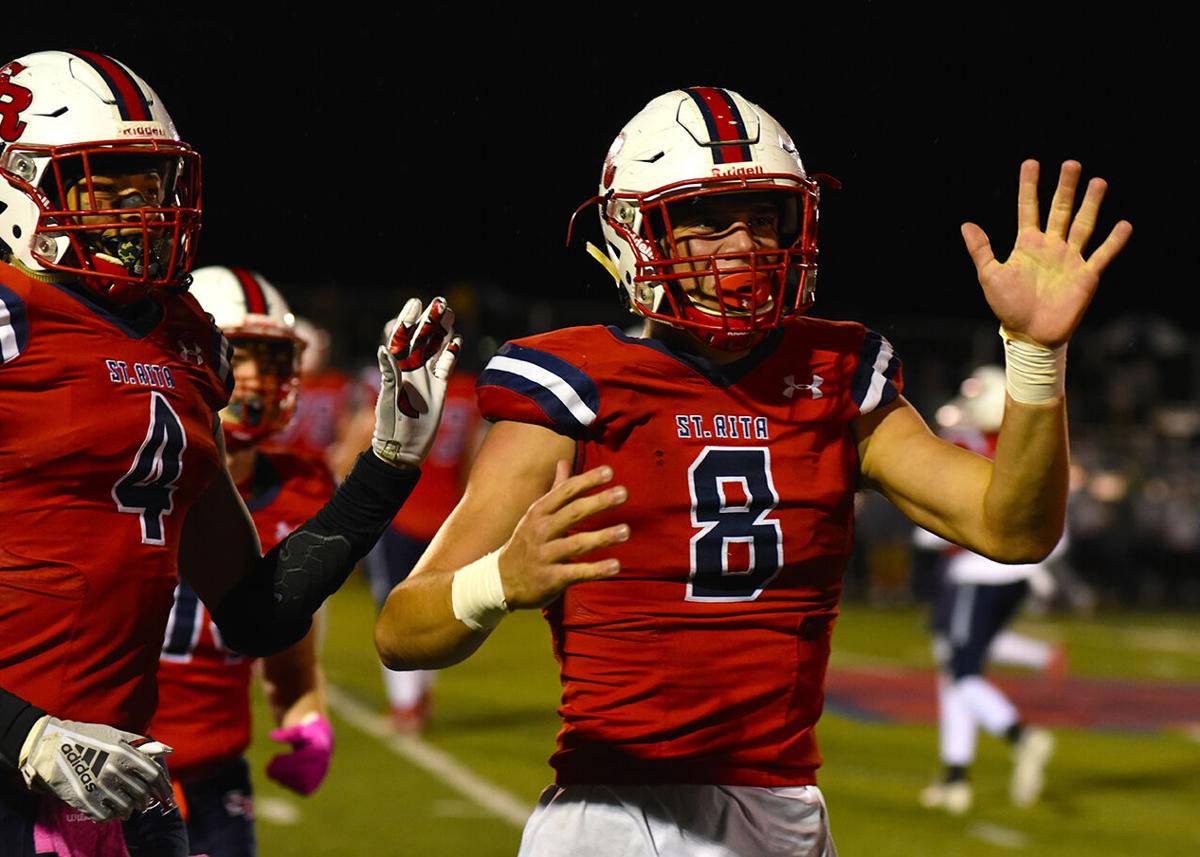 St. Rita senior Djabril McNabb fights his way into the end zone for a 1-yard touchdown to start the second quarter. A standout defensive lineman for the Mustangs, McNabb was allowed to play running back on one play against Providence. (Review photo)

St. Rita senior quarterback Tommy Ulatowski carries the ball in the first half for the Mustangs. Ulatowski rushed for a score and also threw for 2 touchdowns in a blowout win over Providence Catholic. (Review photo)

St. Rita defensive lineman Djabril McNabb knew he would only have one chance to score a touchdown as he lined up on offense as a running back.

Coach Todd Kuska said as much to McNabb, one chance and then back to his usual starring role on defense.

McNabb knew he had to make the best of it.

Doing his best impression of William “The Refrigerator” Perry, McNabb fought his way through the Providence Catholic defense for a 1-yard touchdown run as host St. Rita dominated in a 35-0 win on Oct. 15 in a Chicago Catholic League/East Suburban Catholic Conference (CCL/ESCC) crossover.

“We’ve been going over that in practice all week. Coach told me Monday I had one chance to get in [for a TD] or not,” McNabb said with a laugh. “It’s all in the legs, the will and the heart. I didn’t want to let my team down from that close. I wanted to get into the end zone.”

McNabb’s rushing score was one of 5 first-half touchdowns for St. Rita (6-2) as the Mustangs held a commanding 35-0 halftime advantage.

The winning effort against rival Providence was a team effort with St. Rita missing All-American running back/wide receiver Kaleb Brown, an Ohio State recruit, and running back Kyle Clayton, who was a late scratch with an ankle injury.

Senior quarterback Tommy Ulatowski stepped up in a big way, throwing for 99 yards and 2 TD and rushing for another score.

“It’s that next-man-up mentality. We’ve fought through adversity all year,” Ulatowski said. “That’s been our motto this year. Having Kaleb go down that first game, Kyle a late decision not to play, it’s next man up.”

Brown suffered an injury early in a Week 1 loss to Mt. Carmel and could potentially return for the state playoffs.

Ulatowski scored on a 4-yard run, skipping into the end zone with 5:26 left in the first quarter. After senior Liam Bartos broke up a pass on a Providence fourth-down play, St. Rita capitalized, scoring on a quick drive with McNabb’s TD.

“Djabril is a three-year varsity player for us, a team captain and what a great kid,” Kuska said. “He’s a heck of a leader and the soul of our defense. I said if we got the right opportunity, we’ll give him a shot. You get one shot, so you better get in.”

Ulatowski also connected with EJ Nwagwu for a 68-yard TD on a long bomb and Nikolas Norton on a 25-yard strike.

“We’ve got some big boys up front who have been really paving the way for us,” Ulatowski said. “Everyone’s stepped up for us on the line. I have trust in whoever is out there. Ethan played really well, so did Nik, and it doesn’t matter who’s out there. I trust all these guys.”

Polselli (Queen of Martyrs), a team captain and senior lineman, pounced on the ball, setting up Ulatowski’s rushing score.

“Bad snap, the ball kicked around, but I was lucky to get it,” Polselli said. “Earlier in the year, the coaches gave me a hard time for not picking up a ball. That one was a good feeling. You see the ball on the ground, and everybody panics. You’ve got to go and get it.”

“We’re in a good place,” Polselli said. “We’re looking forward to Week 9. We’re getting hot at the right time. Hopefully, we can get the Green next week and keep the momentum going in the playoffs. Green is big for us, and the state championship is the big one we’re going after.”

St. Rita was 1-2 through three weeks, including losses to Mt. Carmel and Loyola.

“After Loyola, at that Monday practice, the coaches talked to us and told us that as a team, our captains, no more losing,” McNabb said. “We’re got to keep moving and go game by game. As a defense, we fly to the ball as a team. All 11 to the ball, and we make tackles.”