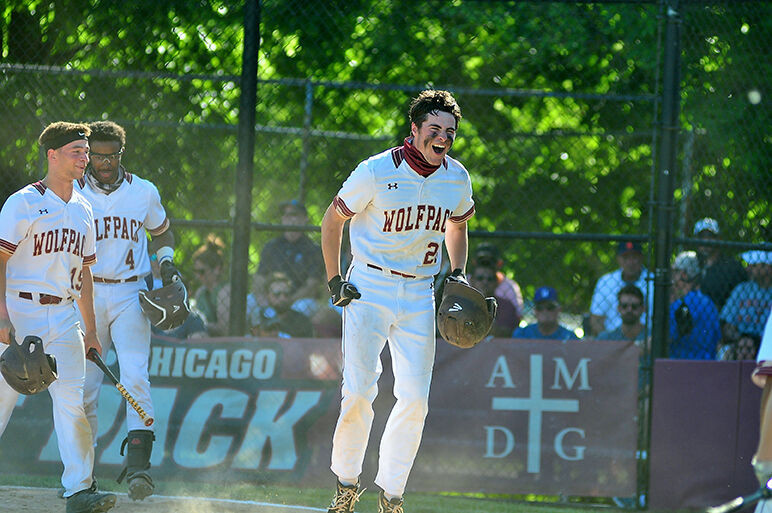 St. Ignatius center fielder Aidan Callahan celebrates his 2-run home run in the first inning. Callahan finished with 3 RBI, including knocking in the game-winning run with a walk-off single in the eighth. 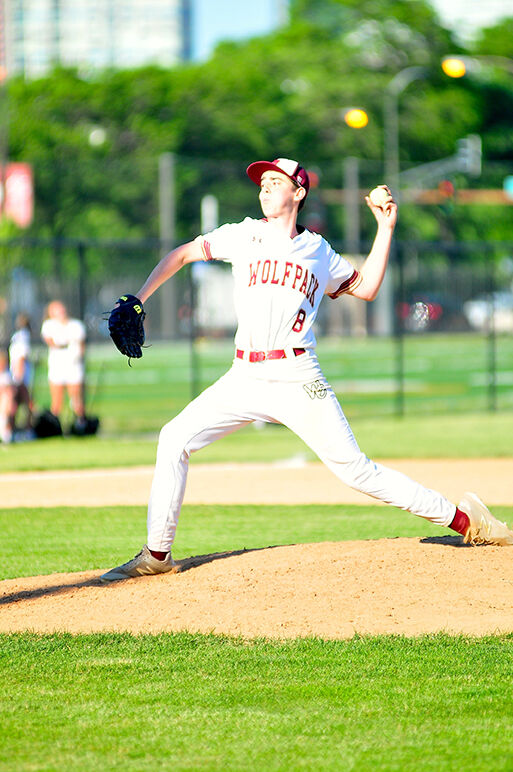 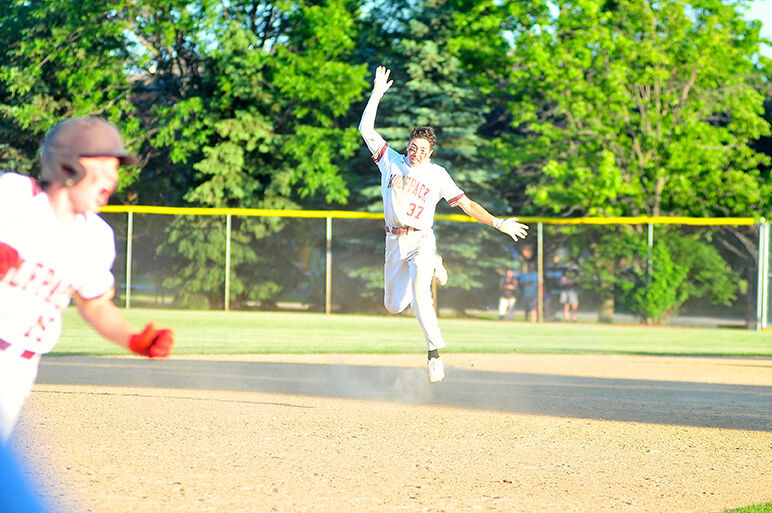 St. Ignatius senior Evan Stuart celebrates the Wolfpack’s walk-off win in the regional semifinal over Downers Grove North. In a 1-out, bases-loaded situation, senior Aidan Callahan ripped a single to center to bring in the winning run. (Review photo)

St. Ignatius center fielder Aidan Callahan celebrates his 2-run home run in the first inning. Callahan finished with 3 RBI, including knocking in the game-winning run with a walk-off single in the eighth.

St. Ignatius senior Evan Stuart celebrates the Wolfpack’s walk-off win in the regional semifinal over Downers Grove North. In a 1-out, bases-loaded situation, senior Aidan Callahan ripped a single to center to bring in the winning run. (Review photo)

With 1 out in the eighth inning, the Trojans wanted to load the bases for a potential force out at any base—it was smart baseball.

However, for Callahan, it was also extra motivation to get the job done.

With a 2-run home run already to his name, Callahan ripped a bases-loaded, walk-off single to center field to lift host St. Ignatius to a thrilling 3-2 victory on June 4 over DGN in extra innings in a Class 4A regional semifinal game.

“The walk pumped me up a little bit, gave me that little bit of extra I needed,” Callahan said. “It was first pitch fastball. He’d just come in, so I knew he’d throw fastball. I tried to get the best pitch I could and put my head down and ran.”

The walk-off winner lifted the Wolfpack to the regional final against top-seed Br. Rice on June 7, after press time. St. Ignatius lost a Chicago Catholic League (CCL) crossover 11-3 on April 26 against the Crusaders.

“That was a great game,” said St. Ignatius Coach Sean O’Connor. “That’s why we play the early-season schedule, the CCL, to prep us for games like this. Every 4A playoff game is going to be like this, a dogfight, if you’re in the game.”

With offense in short supply in a low-scoring pitcher’s duel, the Wolfpack headed to the plate in the eighth and put two men on via a William Duff walk and Aidan Thornton getting hit by a pitch.

After a Michael Gladden sacrifice bunt, DGN intentionally walked Stuart to get to Callahan. The senior center fielder and team captain delivered when his team needed it the most.

“I wanted that senior leader role my entire career here at Ignatius,” Callahan said. “I feel like I was ready for it. All the adversity we went through, it just made us more enthusiastic and ready to play. The team made it easy for me to be a good leader.”

Callahan’s laser to center just dropped in front of the outfielder, bringing Duffy home from third for the winning run and setting off the celebration as his teammates mobbed Callahan.

In the first inning, Callahan rocked a 2-run bomb to right center, hitting the building beyond the fence, John M. Smyth Public School, on the third floor.

“I knew it was gone. They had to tell me where it landed,” Callahan said. “I didn’t even feel it off the bat. That’s when you know.”

On the mound, St. Ignatius’ lefty duo of Martin Boyle and Michael Conway went toe to toe with DGN starter Michael Gorman (7-plus innings, 8 strikeouts, 3 runs on 5 hits and 2 walks). Boyle, a University of Tampa recruit, started the game and threw 3.2 innings, giving up 2 runs on 4 hits and 6 walks with 6 strikeouts.

Conway, a Wisconsin-Whitewater recruit, entered the game in the fourth and extinguished a DGN threat with an inning-ending strikeout. The tall, lanky lefty was a force in relief in 4.1 shutout innings and only gave up a hit and a walk with 7 strikeouts.

“My mentality was get ahead with my offspeed and go from there, kind of pitch backward,” Conway said. “I felt good. I felt in command of all my pitches, fastball, curveball, slider and changeup.”

Conway was originally slotted to pitch the regional title game but was ready to go in the semifinal if needed.

“We were trying not to look ahead. DGN is a great team,” Conway said. “We had to come out and fight. We knew it’d be a close game, so it was great to walk it off.”

The Wolfpack went 9-1 in league games to win the CCL-White, its first title since 2016.

St. Ignatius swept the two-game series in early May with second-place finisher Montini (8-2) and defeated Fenwick and De La Salle on May 25 and 26 on the road to clinch the title.

The team lost the first week of the season due to a COVID pause.

“It starts with the opportunity to be out here,” O’Connor said. “You probably take it for granted for a long time. We took our lumps [early], but it speaks to our seniors. I told them ‘Just hang with me.’ It was great winning the CCL. It was a fantastic run.”