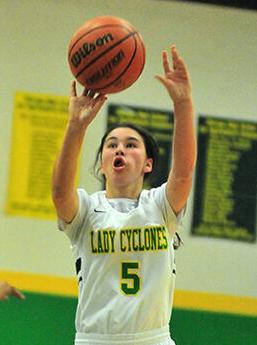 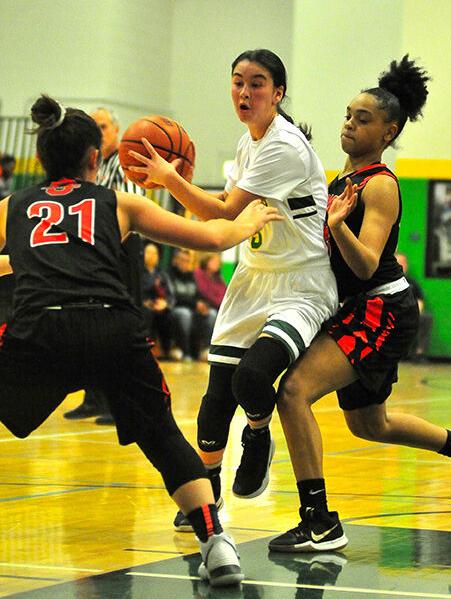 Chicago High School for Agricultural Sciences guard Izzy Horkavy drives the lane against Eisenhower in November 2019. Horkavy is a Mt. Greenwood resident. She led the Cyclones last year in scoring as a sophomore. (Review file photo)

Chicago High School for Agricultural Sciences guard Izzy Horkavy drives the lane against Eisenhower in November 2019. Horkavy is a Mt. Greenwood resident. She led the Cyclones last year in scoring as a sophomore. (Review file photo)

Izzy Horkavy is a 5’5” junior guard on the Chicago High School for Agricultural Sciences (CHSAS) basketball team. A Mt. Greenwood resident and Mt. Greenwood Elementary School graduate, Horkavy was a starter on the varsity team as a freshman and sophomore. The Cyclones went 14-11 in the 2019-20 season. Classes in the Chicago Public Schools were held virtually during the fall semester.

How was your semester with virtual learning?

“It has definitely been different. It’s hard to get used to. My grades weren’t as good as they were when we were in school. I’m not used to it yet. Maybe we’ll be back in the spring. Everything is up in the air right now.”

The basketball season has been pushed back, likely to the spring. Any thoughts on hoops being moved?

“At first, I was a little disappointed. I was really looking forward to basketball, especially with all the virtual learning. It was a tough decision, but the right decision. We haven’t played any basketball this year.”

Able to shoot around at home?

“I’ll shoot on our hoop in the backyard, but you can’t do as much. It’s what I’ve got though. My younger sister, Gracie, we play, and we have some pretty good one-on-one games.”

“I don’t know; I guess it depends. She’s pretty good, and she’s taller than me. That helps her a lot, and she’s fast like me. Gracie plays volleyball, not basketball. I’ll say I win six or seven games out of 10.”

Has basketball always been your favorite sport?

“I’ve been playing since I was in fourth grade. I used to play soccer, softball and volleyball, but basketball is such a fun, fast-paced game. It’s all the energy and the competitiveness. I love that adrenaline you get running back and forth.”

Whenever the high school season is, what are some team goals?

“We expect to play as well as we can. Obviously, it’s not going to be the same season as normal. We’ll do the best we can, especially for our seniors, with this weird season.”

Any big Christmas traditions around the Horkavy house?

“We usually wake up around 7 [Christmas Day] and open gifts. My dad [Gary] passes them out. We either go to my aunt’s house, or they come to our house. We play card games and dice. It was nice this year to have a normal day. We had a lot of fun. I enjoyed it.”

“Actually, we’re getting a dog in February. I’m really excited about that. We’ve wanted a dog for a while, and we’ve been pushing for it. It’s a puppy from a black Lab litter. We’re all so excited. We usually vacation in the summer, so it’ll be an adjustment. If it’s a girl, we’ll name her Blythe. We don’t have a boy’s name picked yet.”

Where does your family go on vacation?

“We always do a big vacation in the summer. On spring break, we’ve gone to the Smokey Mountains and West Virginia. In the summer, we always go west. We’ll go with the camper for three weeks, places like Yellowstone, Utah, Montana.”

Are you a big outdoors family?

“Huge outdoor family. We’ll go on hikes. We’ll be up at 7 a.m. and not come back until the sun goes down. My siblings, they’ll do a Junior Ranger program, stuff that keeps them busy with animals and being outside.”

What was your favorite trip?

“Each vacation is pretty fun. I really liked Yellowstone, Glacier National Park and the Smokeys. We went and saw Arches National Park in Utah, but it wasn’t the same. Yellowstone is more my type where you’re seeing bison and moose.”

Have any animal encounters?

“We saw bears, a mom and two cubs, crossing the street right in front of our truck. That was super cool in the Grand Tetons. We were caught in a bison [traffic] jam, too. They almost hit the car, and they could have dented the car walking by. Thankfully, they didn’t ram the truck.”

“I actually don’t watch much basketball. I like football and hockey more. The Bears right now … ugh. They got off to a hot start at least. The Blackhawks are coming back, but Kirby Dach is out. His injury looked pretty bad. My favorite players are Michael Jordan, Walter Payton and, currently, Dach.”

Did you watch “The Last Dance”?

“I did. I watched it with my parents [Gary and Kristin]. My dad is a huge basketball fan. My favorite part, it was the whole thing. It was so interesting to see how the team worked so well together. I knew about Jordan but not much else going in. I learned a lot about the whole team, the coaches, everything. It was a great documentary.”