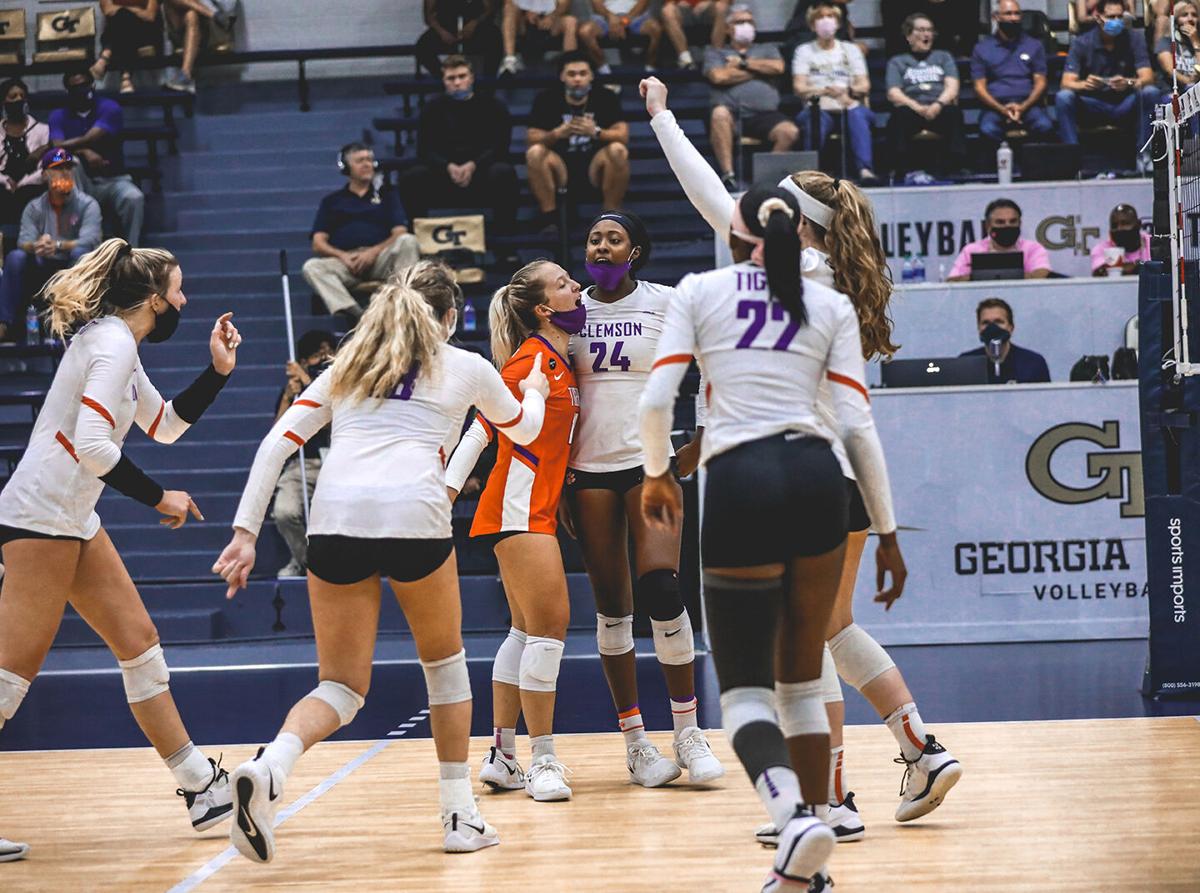 Clemson freshman Camryn Hannah (24) celebrates an important point with her teammates in a match at Georgia Tech. A Marist High School alumna, Hannah made her presence felt immediately for the Tigers in the fall season. (photo courtesy of Clemson Athletic Communications) 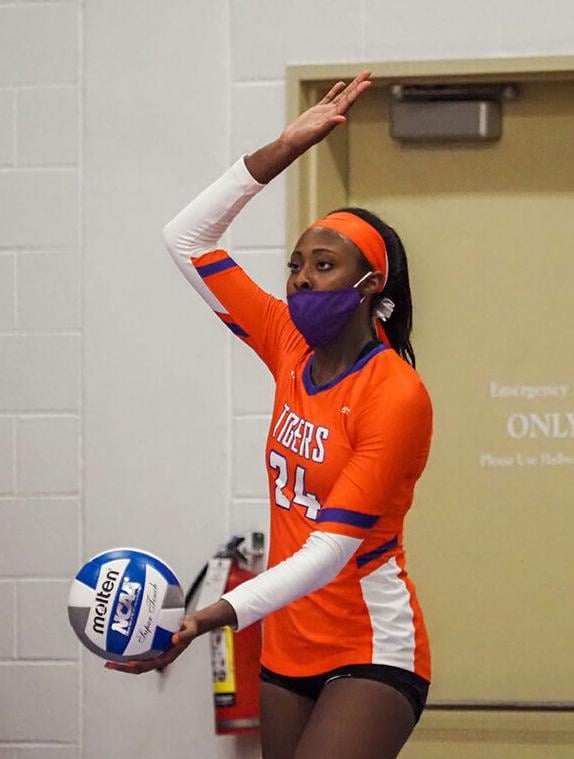 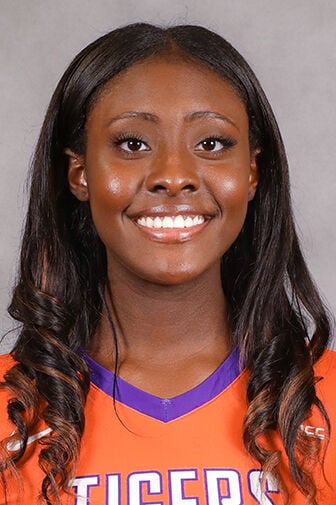 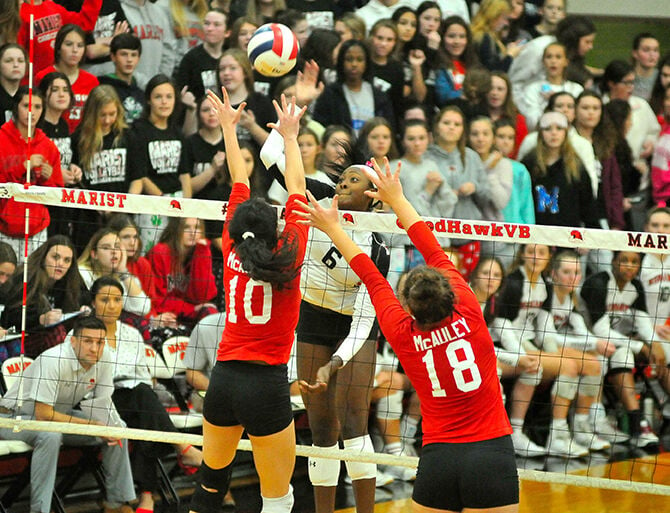 Camryn Hannah smashes a kill in a supersectional match in her senior year at Marist. In three varsity seasons, Hannah helped lead the RedHawks to two state championships and a third-place finish. (Review file photo)

Clemson freshman Camryn Hannah (24) celebrates an important point with her teammates in a match at Georgia Tech. A Marist High School alumna, Hannah made her presence felt immediately for the Tigers in the fall season. (photo courtesy of Clemson Athletic Communications)

Camryn Hannah smashes a kill in a supersectional match in her senior year at Marist. In three varsity seasons, Hannah helped lead the RedHawks to two state championships and a third-place finish. (Review file photo)

Camryn Hannah always appreciated getting to a gym or a weight room and working out with teammates.

However, these days the Marist graduate has an even bigger appreciation for those times.

Hannah is in her freshman season on the Clemson University volleyball team as the Tigers and athletic programs across the country navigate the current health crisis.

“This season has made me even more determined when I do get in the gym,” Hannah said. “I want to get better each time. Our seniors have done a great job leading us, even just sending a text about practice. A practice, a match, it’s been something to look forward to.”

Hannah, a Lansing resident, is a 2020 Marist High School graduate.

Arriving on campus in Clemson, S.C., this summer, Hannah made an immediate impact in the lineup. In her collegiate debut, a 5-set win over Miami, on Oct. 8 at Clemson, Hannah made her presence felt with authority.

The 6’2” right side/outside hitter smashed 15 kills to lead the Tigers.

“That first game, I did have that ‘I can do it’ feeling,” Hannah said. “There’s a learning curve. The game changes. Girls are faster. They’re smarter. They’re older, but it is just playing volleyball. It’s just a volleyball match.”

“I felt much stronger, just working out in the weight room,” Hannah said. “I could feel it on the court. I’ve always struggled with serve/receive too, but I’m always striving to get better there too. I felt like I did. I definitely had more confidence.”

Just getting back on the court after a hectic few months was a relief for Hannah and her teammates. Hannah arrived on campus in late June and then did a two-week quarantine.

Under NCAA rules, the volleyball team was allowed to host open gyms without coaches for several weeks before beginning official practices with the coaching staff.

With so much up in the air, getting to know her new teammates came as a huge relief.

“Through the weight room and conditioning and the open gyms, I really got to know the girls,” Hannah said. “We’re staying together. In a normal year, maybe you break off into little groups. This year, it’s just us. We’re teammates, and these girls are my sisters. It’s made things better.”

Clemson University implemented a facemask guideline this fall that required everyone on campus to wear masks, including the volleyball team.

Hannah became accustomed to practicing and playing in a mask.

“It was definitely tough. It took a lot of discipline to keep the mask up on my face,” Hannah said. “You come in as a freshman and think, ‘Oh, I can’t do this,’ but you get used to it. You feel comfortable wearing it. It took a while, but whatever it took to play.”

Instead of one condensed season in the fall, the volleyball season has been broken up into fall and spring seasons.

When students return to campus in January, an extended preseason will begin where the Tigers will work out and build up to the second half of the season.

Matches are expected to begin in March, including a NCAA tournament.

In the meantime, Hannah will keep working in the gym and weight room. She was able to come home for Thanksgiving and get a much-deserved break.

But, she’s definitely ready to get back on the court and continue to carve out a hard-earned reputation for herself and the Tigers.

“Coming in as a freshman, I wasn’t expecting it, to play right away,” Hannah said. “I knew there’d be a learning curve. [Coach Michaela Franklin] said not to worry about the big picture. We should just focus on one thing in front of you. That’s what I did, and it has really helped.”

We Want Your Old Car!