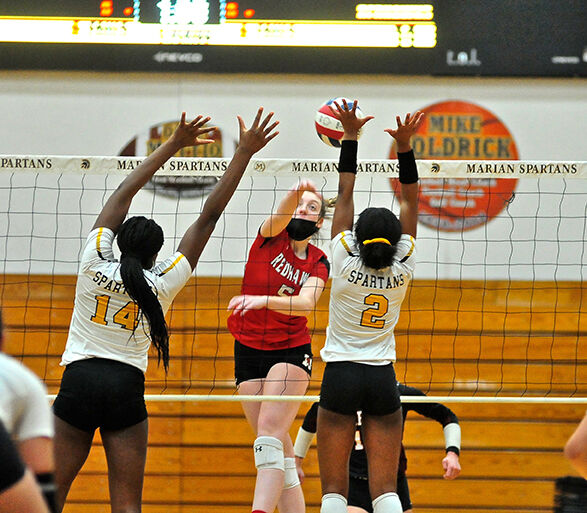 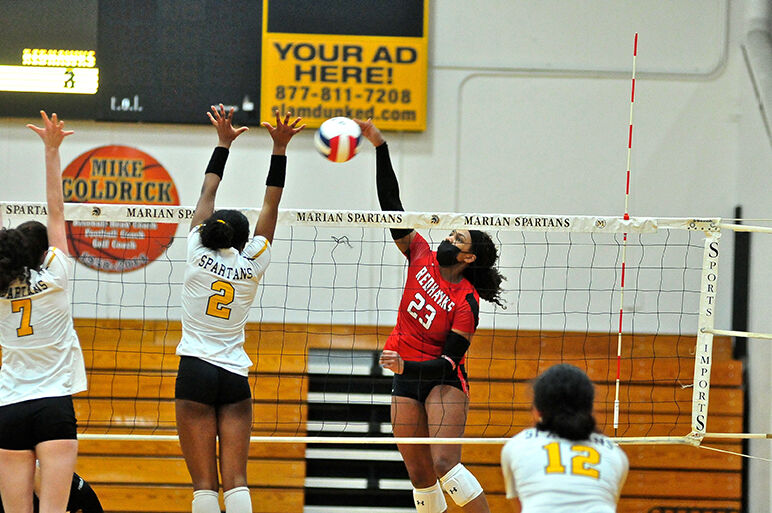 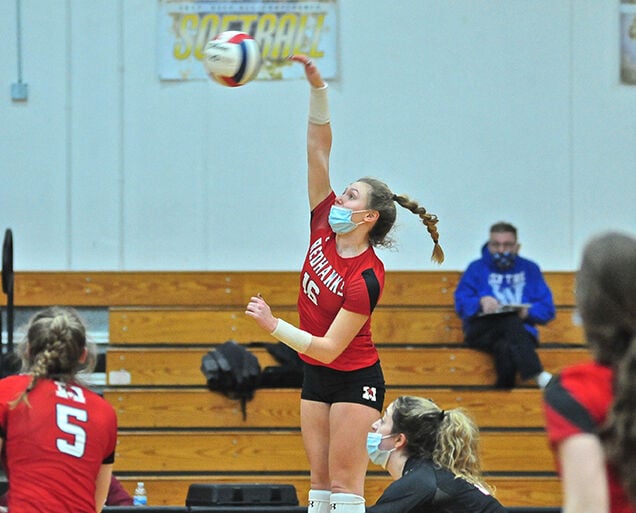 Marist senior Ewelina Gacek swings away from the back row against Marian Catholic. Gacek finished with 4 kills for the RedHawks. (Review photo)

Marist senior Ewelina Gacek swings away from the back row against Marian Catholic. Gacek finished with 4 kills for the RedHawks. (Review photo)

Marist junior Mary Clare Brusek is no stranger to making a quick transition from sport to sport when the seasons change.

As a sophomore, Brusek was a key middle on the RedHawks volleyball team that finished third in Class 4A. Just two days later, she was back on the court, this time with the basketball team.

This year, the most unique in Illinois high school history due to the pandemic, her schedule was flipped. A key forward on the basketball team, Brusek helped the RedHawks to the East Suburban Catholic Conference (ESCC) title on March 13.

The next day, she was playing in Marist’s preseason Red and White game with her volleyball teammates.

For the talented athlete, it was same old same old.

“I was super-excited to join volleyball. The first day back was the Red and White night, so I jumped right into a game,” Brusek said. “It’s very exciting I’m able to do both sports. You might take days off; but at Marist, it’s super competitive, so if you take a day off, you’re behind.”

In the team’s second match of the year, Brusek finished with 6 kills and 3 blocks as Marist dropped a tough 25-20, 25-21 match against Marian Catholic on March 18 in an ESCC showdown.

The RedHawks played well in doses in both sets but couldn’t sustain the energy to deliver the knockout.

Down 21-20 in the first set after a Brusek kill, Marist saw Marian close on a quick 4-0 run, all 4 points coming off errors from the RedHawks.

Up 20-19 in the second set, Marist didn’t have an answer for Marian junior Sara Johnson down the stretch as she ripped 3 late kills as part of a 6-1 match-winning run.

Marist Coach Jordan Vidovic said his team needs to improve some facets as it continues to gel now that everyone on the roster is back in action.

“We didn’t control our side very well today,” Vidovic said. “It was still sort of helter skelter for us. We’re trying to piece things together. Like everybody, we’ve had some moving parts in and out at practice. We’re figuring it out, though.”

Marist defeated Nazareth, the 2019 Class 3A third-place team, in three sets on March 17 in its season opener.

In the 2019 season, Marist lost an early conference match but rallied the rest of the season to share the ESCC title with Benet.

So, even with the short season for the RedHawks, they’re not fretting over the early loss.

“The conference set-up, we were in this boat last year with an early loss, and that turned out OK,” Vidovic said. “We know who we’ll see in conference every day, and we love that. That’s what we want. Practice is fun, but we want to get out here and test ourselves.”

Brusek said the RedHawks will get back to work and not dwell on the loss.

“We weren’t very level-headed. We sort of froze up in our serve/receive and our defense,” Brusek said. “We have to be more confident and aggressive on the floor overall.”

Marist sophomore middle Elise Ward was also a starting forward on the basketball team, and she also made the quick jump to volleyball.

As for Brusek, she’s focused on making the best of the volleyball season. Still, she’s thinking a little bit about the spring season.

With no volleyball last fall, Brusek joined the golf team. The pull of being a four-sport athlete has definitely crossed her mind.

“I was talking to my parents about playing lacrosse or soccer. They don’t want me to, but I’d like to,” Brusek said with a smile. “That’s so cool. You normally would never get a chance to play four sports. It’d be a brand new sport for me. I’m friends with [lacrosse goalkeeper and Duke recruit Maddie Drebing], so she can teach me a few things.”