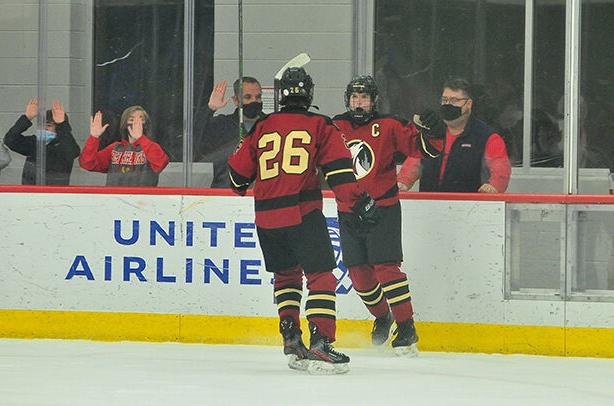 St. Ignatius senior forward Will Gerami (right) celebrates his goal late in the second period with Sean Doyle. The goal came at the end of a tough 5-on-3 period that saw the Wolfpack score the improbable goal. (Review photo) 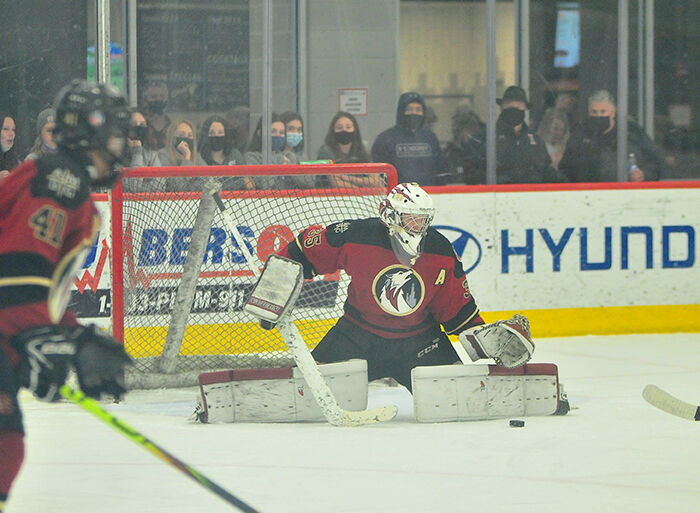 St. Ignatius junior goalkeeper Sebastian Wigfield makes a save in the first period on a Benet shot. Wigifield finished with 30 saves in Game 1 of the Kennedy Cup championship series. (Review photo)

St. Ignatius senior forward Will Gerami (right) celebrates his goal late in the second period with Sean Doyle. The goal came at the end of a tough 5-on-3 period that saw the Wolfpack score the improbable goal. (Review photo)

St. Ignatius junior goalkeeper Sebastian Wigfield makes a save in the first period on a Benet shot. Wigifield finished with 30 saves in Game 1 of the Kennedy Cup championship series. (Review photo)

St. Ignatius senior forward Will Gerami has been a workhorse all season for the Wolfpack.

In the regular season, he was one of the top scorers in the Chicago Catholic Hockey League (CCHL), racking up 20 goals and 20 assists as the star athlete provided one highlight after another.

With program history on the line in Game 1 of the Kennedy Cup championship series, Gerami delivered his biggest play yet.

Up 2-0 and having held off a Benet Academy 5-on-3 advantage late in the second period, Gerami swooped in for a steal and raced up the ice to score a momentum-swinging goal from 10 feet out.

St. Ignatius went on to an exciting 4-1 victory over the Redwings at Fifth Third Arena on May 8 to start the three-game series.

“That goal was a huge momentum swing, and we stuck with it into the third period,” Gerami said. “We were able to close it out for the win. We had to stay composed. It was a huge penalty kill for our team. We went right back to work.”

On May 9 at Seven Bridges Ice Arena in Woodridge, Benet responded with a 4-2 win to force a decisive Game 3 that is scheduled for May 13 at 7:30 p.m. at Fifth Third Arena.

“Our biggest game of the year, special teams were the difference,” Smith said. “We found a way to fight through the 5-on-3 and conversely capitalize on the 5-on-3 that we had. This leadership group is to be fully commended.”

Velardi scored halfway through the first period, and Smat scored early in the second with St. Ignatius working with a two-man advantage.

However, the Wolfpack’s lead looked dangerously thin when a five-minute major and another penalty gave Benet a prime scoring opportunity. Wigfield was a wall, blocking one shot after another while his defense deflected several Redwing shots.

“Penalties left and right, you stay at that medium with no highs or lows,” Wigfield said. “You don’t want to get too hyped up. You can’t be too stressed about the situation, so stick to the recipe and keep a level head.”

Wigfield gave props to junior defenders Bobby Eber and Colin Mulcahy and senior Nick Mathurin for their strong play all game in front of the net.

“It’s been our vibe in the locker room. Everyone is hyped up, so that keeps me going, too,” Wigfield said. “I’m confident in myself and the team’s ability in how we stepped up. I did my job, but the whole defense did their job today, especially blocking shots.”

After killing a penalty and then in a 4-on-4 situation following a Benet penalty, Gerami struck with his score.

Following a Benet score from Tommy Budreck in the third, St. Ignatius controlled the game’s final 13 minutes, including an empty-net goal from Rhyner with 35 seconds left.

Senior forward Sean Doyle said the energy from an enthusiastic crowd gave the Wolfpack a big boost in the series opener.

“With a big crowd, we played off the energy,” Doyle said. “We knew Benet would play us tough, so we tried to match it early and stay with them, then get the edge and keep it. You never want to be down 5 on 3, but if you can find a way to get through it, it’s a big momentum change.”

Doyle was St. Ignatius’ second-leading scorer this year with 15 goals and 19 assists.

The Kennedy Cup has been played since 1964. St. Ignatius lost the 2019 Kennedy Cup championship to St. Viator.

As the Wolfpack continues to chase its first Kennedy Cup, Gerami said the team knows nothing will come easy.

“It’d be our first trophy for St. Ignatius, so to do it with this group of guys, it’d be something I’d always remember,” Gerami said after Game 1. “The job is not done yet. It’s not finished. If we play St. Ignatius hockey, hard-working and competitive, that hard work beats it all.”