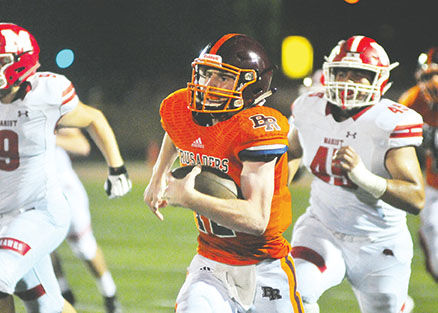 Br. Rice junior QB Ben Somers races for yardage in the second half. Somers threw for 162 yards, 2 TD and ran for 54 yards against Marist. (Review photo) 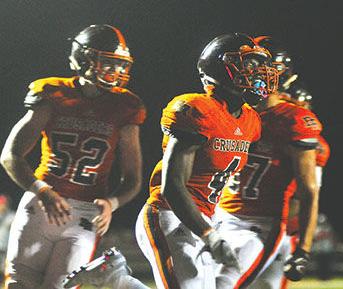 Senior Jahlil Pettis (4) celebrates his 14-yard touchdown reception late in the second quarter. The touchdown put Br. Rice up 10-7 before the half. (Review photo) 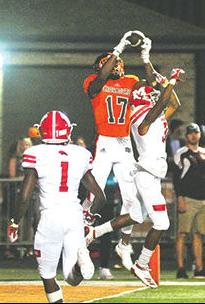 Br. Rice junior QB Ben Somers races for yardage in the second half. Somers threw for 162 yards, 2 TD and ran for 54 yards against Marist. (Review photo)

Senior Jahlil Pettis (4) celebrates his 14-yard touchdown reception late in the second quarter. The touchdown put Br. Rice up 10-7 before the half. (Review photo)

Replacing all 11 starters from last season’s state runner-up squad, the Br. Rice offense would be a work in progress through the early weeks of the year.

For new starting quarterback Ben Somers, a Week-3 loss to Providence Catholic was especially rough, as the junior threw 4 interceptions in a Crusaders loss.

However, he wasn’t going to let one bad performance keep him down.

Throwing for 2 touchdowns, Somers helped lead host Br. Rice to a 17-14 victory on Sept. 20 over rival Marist in a Chicago Catholic League/East Suburban Catholic Conference-Blue victory in the annual Battle of Pulaski.

“It was a really nice win, especially coming off last week. That was a heartbreaker,” Somers said. “The whole week, you watch film and learn from mistakes. Winning our first conference game against a Marist team with a lot of kids I know and them hitting me, that win felt pretty good.”

The junior connected with Jahlil Pettis for a 14-yard score and Dwayne Moorehead (Kellogg) for a 22-yard touchdown.

Coach Brian Badke has been pleased with his quarterback’s development.

“Ben is growing and developing into a leader. He’s a warrior,” Badke said. “He’s a tough kid and a student of the game. I’m proud of his work ethic. He’s really taken ownership of that position. He’s a heck of a football player.”

Somers and the Crusaders marched down the field late in the second quarter on a 92-yard drive that featured 2 catches for sophomore Brandon Rogers of 40 and 23 yards.

In the red zone, Somers hit a leaping Pettis in the end zone for the touchdown.

“It was huge. That drive shifted the whole momentum of the game,” Somers said. “Brandon came up big. He told me before the drive, if we need that one big play, he’ll get open. I trust him; he got open, and he delivered.”

The Pettis score gave Br. Rice a 10-7 halftime advantage. Moorehead’s TD early in the third extended the lead to 17-7.

From there, it was all the Crusaders defense.

Whelan had 2 tackles for loss as Marist tried to tie or go up, and Roche aiding on a sack of Marist QB Hayden Mikesell.

“Our coaches called an inside play, so I faked to the outside and went inside,” Whelan said. “I saw [Mikesell] rolling out and was able to wrap him up. You dive and see what you can get. That’s a great feeling. We kept our high energy up the whole game.”

Dolan had 2 key pass breakups on the drive, including knocking down on a pass on a fourth-down play near midfield.

Marist scored with a trick play earlier in the fourth when Mikesell handed the ball off to Dontrell Jackson, who also sees time at QB for the RedHawks. Jackson rolled right looking for a receiver but then fired back across the field to hit Mikesell up the sideline behind the Crusaders defense.

The touchdown capped a 68-yard drive that ate up 3:38 off the clock.

Badke loved his defense’s ability to fight back on the next drive.

“The defense dealt with some adversity. They got scored on, and it ticked them off,” Badke said. “They dug really deep and finished. We did a good job locking them down defensively.”