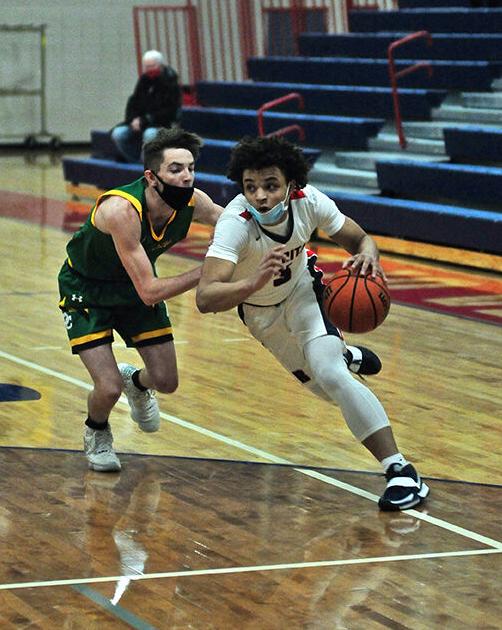 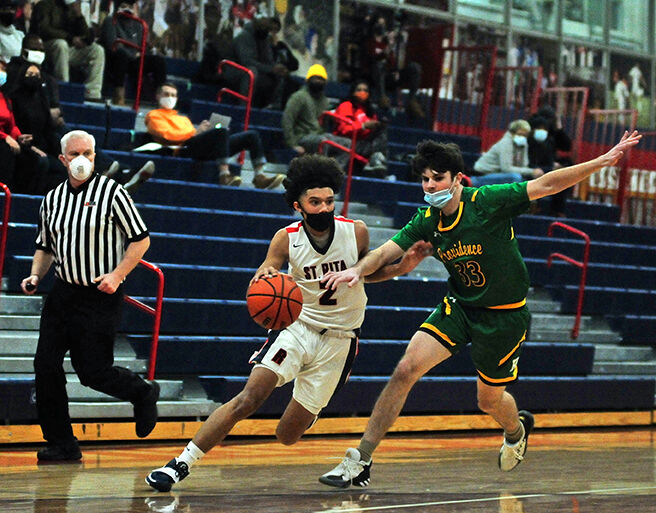 Freshman guard Jaedin Reyna works his way to the baseline. He scored 8 points in his high school debut for St. Rita. (Review photo) 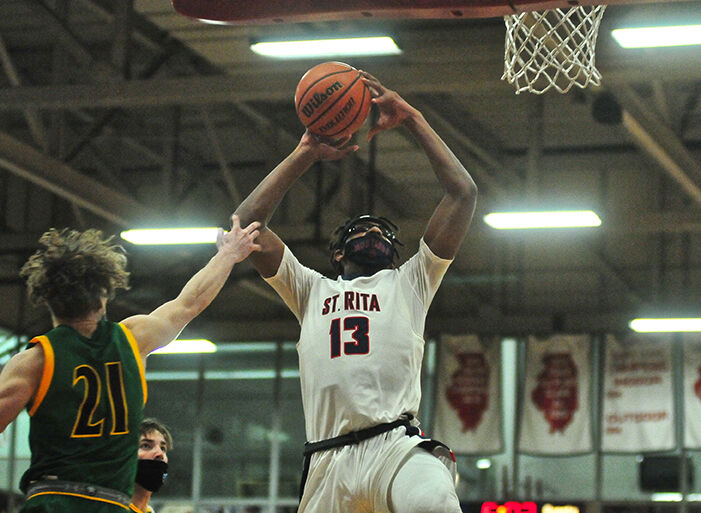 Freshman forward J.B. Brown goes up with a shot in traffic against Providence. The St. Rita freshman is a highly touted recruit in the Class of 2024. (Review photo)

Freshman guard Jaedin Reyna works his way to the baseline. He scored 8 points in his high school debut for St. Rita. (Review photo)

Freshman forward J.B. Brown goes up with a shot in traffic against Providence. The St. Rita freshman is a highly touted recruit in the Class of 2024. (Review photo)

Throughout the extended offseason caused by the pandemic, St. Rita senior Christian Henry heard all the doubts about the Mustangs’ young roster.

A highly touted freshman class was expected to quickly contribute at the varsity level, but many basketball fans wondered how the freshmen would adjust and if they’d be able to play through the inevitable growing pains.

But, with two years of varsity experience to his name, Henry was determined to do anything he could to help his teammates.

Henry showed his leadership abilities as he poured in 24 points against Providence Catholic in a Chicago Catholic League crossover on Feb. 10 when host St. Rita opened its season with a 57-53 victory.

“It felt good as a team,” he said. “Everyone says we’re young and that we might not do as well as we expect to do. This young group, they’re really good. They help me every day, and I help them. I expect to be a leader this year.”

Henry, a Vanderpoel Elementary School graduate, has been on the varsity since his sophomore season. St. Rita Coach Roshawn Russell said the local product’s leadership and experience are essential as the young Mustangs find their way through a shortened winter season.

“Every year that Christian has been at St. Rita, he’s been a part of a Catholic League championship,” Russell said. “We talked before the season. We’re going to go as far as he takes us this year. For our young guys, this year is a great learning experience.”

Holding off a push from the Celtics, Henry, a 6’2” guard, saved his best for last. After scoring 10 points through three quarters, he went off for 14 points in the fourth.

He went 7 for 9 at the free-throw line, including a 4-for-4 performance in the game’s final minute.

“That’s just us fighting for a win,” Henry said. “I felt like we needed a little boost in the fourth quarter to get over the hump. It happened to be my time to do it. I don’t feel any pressure. I’m glad to be playing with our other seniors. We weren’t sure we were going to have a season, so we were even more hyped to come out with a win.”

Brown, an athletic 6’8”, 210-pound forward, already has offers from DePaul, Providence, Siena and Western Illinois. He added 3 rebounds in his high school debut.

Brown admitted to some first-game butterflies, but he was thrilled to take the court.

“Definitely there were some nerves for me,” Brown said with a laugh, “though a lot of excitement in the locker room and the hours leading up to the game, especially around school. It feels great to get [the first game] under our belt and get that team win.”

St. Rita also features a strong sophomore class that gives the Mustangs plenty of depth for this season and beyond.

Brown said he’s eager for the team to establish an identity and make the best of the shortened winter season.

“We’ll have to step up and be here the next three and four years,” he said. “Let’s make our mark, our stamp, our legacy at St. Rita. As young guys, that’s something we talk about a lot. It’s something we take pride in. I’m glad we came out as a team and show how hard we’ve worked.”