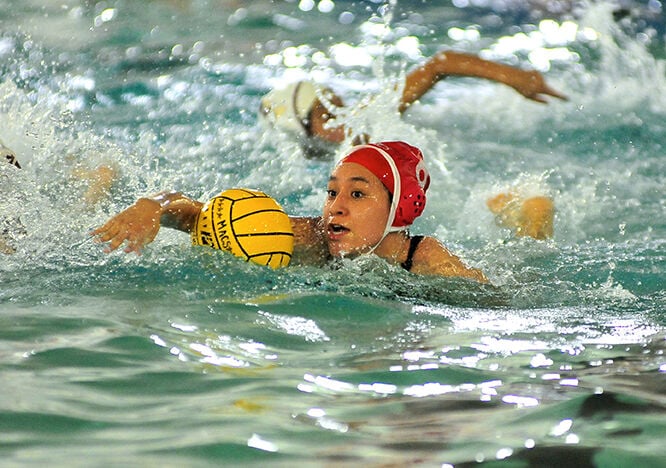 Mother McAuley senior Gladys Contreras leads the charge on a fast break in the third quarter. Contreras finished with 2 goals and 2 assists in the season-opening win over St. Ignatius. (Review photo) 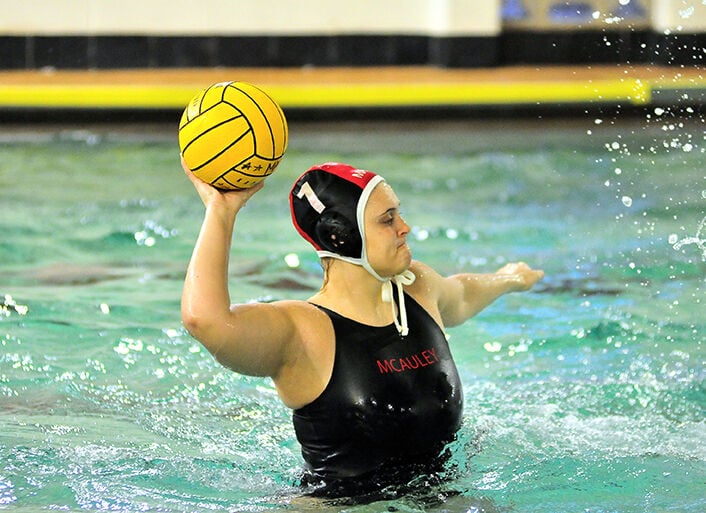 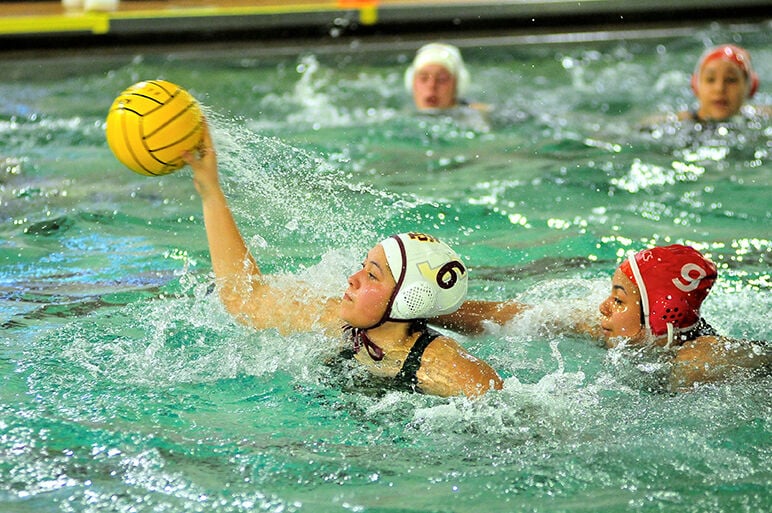 St. Ignatius freshman Alondra Torres takes a shot in the second half. Torres led the Wolfpack with 3 goals against Mother McAuley. (Review photo)

Mother McAuley senior Gladys Contreras leads the charge on a fast break in the third quarter. Contreras finished with 2 goals and 2 assists in the season-opening win over St. Ignatius. (Review photo)

St. Ignatius freshman Alondra Torres takes a shot in the second half. Torres led the Wolfpack with 3 goals against Mother McAuley. (Review photo)

After playing a key supporting role for the 2019 squad that finished third in the state, Gladys Contreras was ready for her junior year with the Mother McAuley water polo team.

The Mighty Macs had lost a talented senior class from the 2019 squad, but plenty of talent remained on the roster.

Then, just four days into the spring season where McAuley played only two matches, the season was cancelled due to the pandemic.

“It was really sad. Most of our seniors had graduated, and I was really excited to play with our new seniors,” Contreras said. “It was such a down feeling. I was ready to play with everyone.”

Water polo was the only spring sport to begin competitions in spring 2020 before the season was ended.

On March 22, with things relatively back to normal sports-wise, boys and girls water polo teams were allowed to begin competitions. The season, which will feature a state tournament, will continue through May 29.

Mother McAuley Coach Nancy O’Brien-Kane said the ability to get back in the pool and compete as a team was not to be taken for granted.

“The energy right now is being thankful,” O’Brien-Kane said. “We’re grateful to have a season. It will be different, but we’re happy to be here. What a difference a year makes.”

Contreras is one of three players on the team from the 2019 state squad, including seniors Hannah Gnatt and Elizabeth McNicholas.

With so much inexperienced talent on the roster, Contreras is doing her best to help smooth out her teammates’ transition to the varsity level.

“It’s just talking to them and making them feel comfortable,” Contreras said. “I know for me as a freshman and sophomore I put too much pressure on myself. As seniors, as our older players, we need to reassure the younger girls they’re not alone.”

The Mighty Macs found themselves down 3-0 just five-plus minutes into the game, but they rallied quickly.

DuMais tallied the first goal for McAuley late in the first quarter to help turn the momentum.

That was just the start as the Macs took a 4-3 advantage into halftime.

McAuley ended the game on a defense-dominated 11-2 run during the final 22 minutes.

“Coach always tells us to settle down,” Contreras said. “When we talk and reassure each other, there’s no need to feel that pressure. It’s making sure we’re all on the same page.”

In goal, Landers (shallow end) and Jacobsen (deep end) were forces to be reckoned with, swatting down one shot after another.

For Landers, it’s another positive step in a new sport. She did not play water polo until her junior season, only to see that season canceled due to the pandemic.

“I played volleyball and basketball at McAuley before,” Landers said. “I had to quit volleyball. I was so down. Water polo sounded so fun, just so exciting. It’s a bunch of sports I grew up playing combined into one. It’s a fun environment.”

After the early struggles, Landers settled in quickly in net. Continuing to adjust to a new sport, she said it’s all about being conscious of the location of the opponent’s go-to scorers.

“It’s definitely just being aware of where the ball is and where the best players on offense are,” Landers said. “For me, I’m tall, so I can block a lot of shots and take away a lot of their angles. It’s our senior year. We got our junior year taken away and much of this year. It’s super-exciting to have a season.”

O’Brien-Kane has been impressed with Landers’ development.

“Cassidy has a rocket of an arm. She can throw across the pool with ease and dead-set accuracy,” O’Brien-Kane said. “That helped today with fast breaks. She’s an all-around great human being and a team leader the girls look up to.”

“Last year was supposed to be the first exciting year of a rebuild with only one senior and a solid freshman class,” Lum said. “We’re inexperienced, but we have strong senior leadership that has been really valuable this year.”