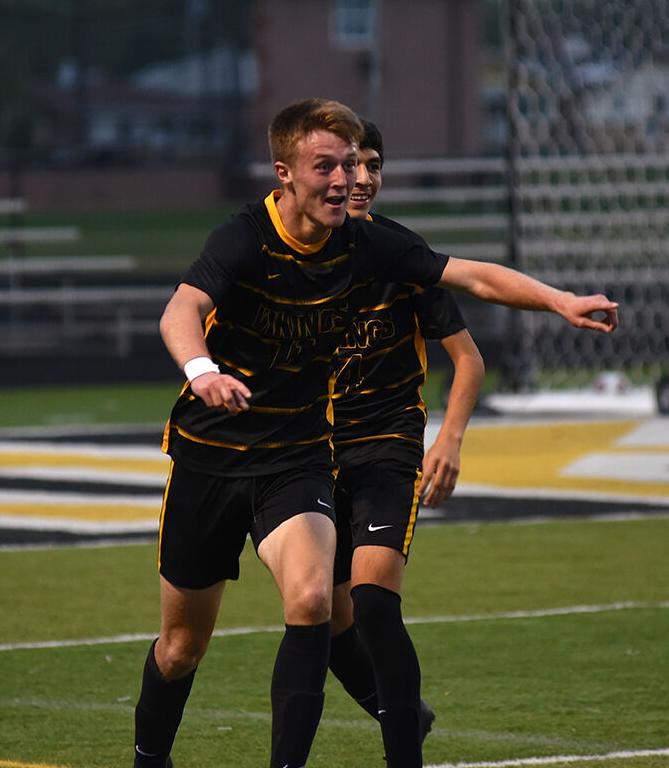 St. Laurence senior Eric Antkiewicz celebrates his goal in the first half to put the Vikings up 2-0. Antkiewicz is a forward on the soccer team and the kicker for the St. Laurence varsity football team. (Review photo) 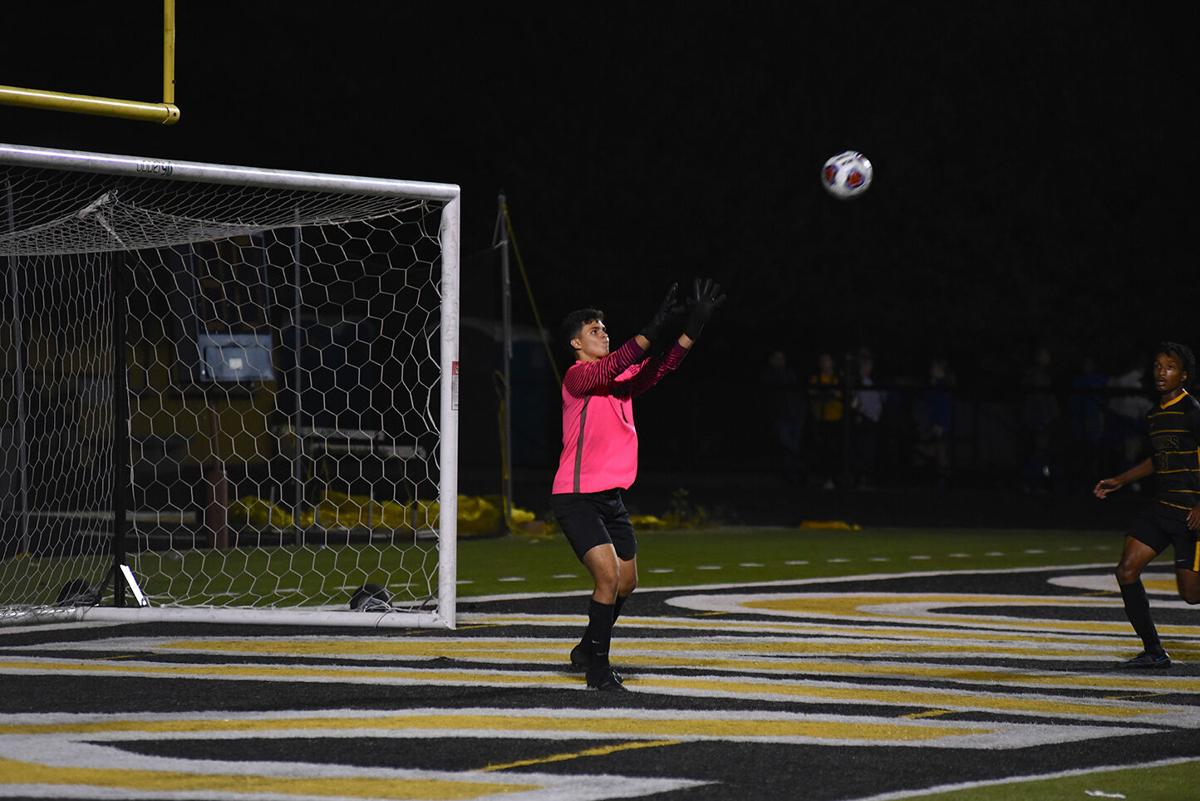 St. Laurence junior goalkeeper Damian Ascencio makes a save off a long-distance St. Ignatius shot in the second half. Ascencio finished with 7 stops for the Vikings. (Review photo) 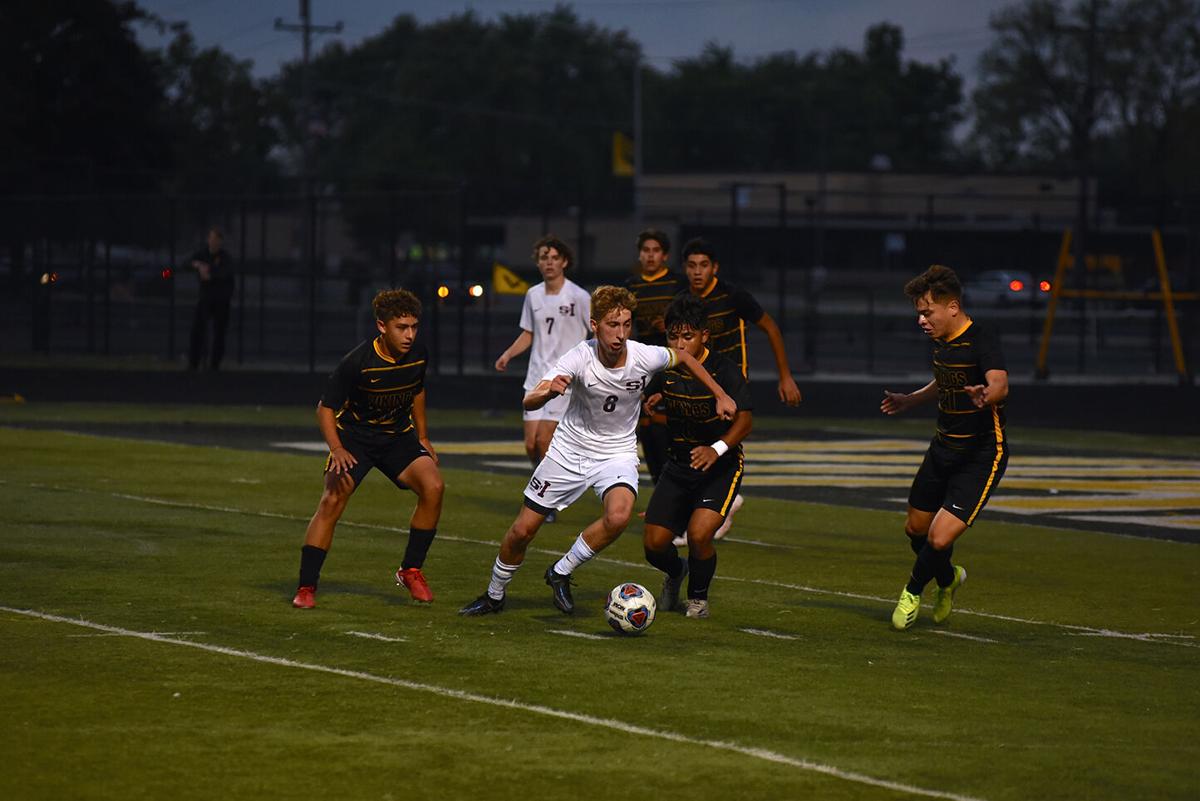 St. Ignatius sophomore Oscar Quinn Pasin leads an attack on the St. Laurence defense in the first half. Pasin’s penalty kick in the half was blocked by Vikings goalkeeper Damian Ascencio. (Review photo)

St. Laurence senior Eric Antkiewicz celebrates his goal in the first half to put the Vikings up 2-0. Antkiewicz is a forward on the soccer team and the kicker for the St. Laurence varsity football team. (Review photo)

St. Laurence junior goalkeeper Damian Ascencio makes a save off a long-distance St. Ignatius shot in the second half. Ascencio finished with 7 stops for the Vikings. (Review photo)

St. Ignatius sophomore Oscar Quinn Pasin leads an attack on the St. Laurence defense in the first half. Pasin’s penalty kick in the half was blocked by Vikings goalkeeper Damian Ascencio. (Review photo)

Eric Antkiewicz has been a busy student-athlete this season at St. Laurence.

The senior is doing double-duty as a starting forward on the soccer team and the kicker on the football team.

That busy schedule has provided some nerve-wracking moments, including on Oct. 1 when the soccer team had a game at 4:30 p.m. and the football team had one at 7:30 p.m.

“I get scared in that situation,” Antkiewicz said with a laugh. “The game’s about to end, and I’m telling [Assistant Soccer Coach Bill Gaichas] ‘Let’s go! We got to go!’ He got me there for football about 6 minutes before the game. It was close, but I got there.”

Antkiewicz has made it work all season for the Vikings, including scoring an early goal in host St. Laurence’s 2-0 win on Oct. 4 over St. Ignatius in a Chicago Catholic League-Blue game.

It was Antkiewicz’s fifth goal of the season.

Senior Jessie Cardiel opened the scoring with his goal on an assist from junior Bryan Rivera. Brenton DuBoise assisted on Antkiewicz’s goal.

For Antkiewicz, it is his second varsity season handling football and soccer.

“It’s so much fun. It’s great for the relationships, too,” Antkiewicz said. “It’s two different groups. The football guys are all loud and obnoxious, and the soccer guys are cracking jokes all the time. All these guys on both teams are awesome.”

Juggling the two schedules, Antkiewicz said he keeps in touch with both coaching staffs.

Some days, it’s two practices, and other days, it’s a quick football practice and then off to a game. He grew up playing soccer and football, including as a tight end.

It was in eighth grade that he started kicking, and then his sophomore year when he really dove into improving as a kicker.

“It was my sophomore year that I started taking it really seriously,” Antkiewicz said. “Growing up, I wanted to play a different position [than kicker] but with soccer, I wasn’t there at football enough. It’s a mental battle, but it takes a lot of trust and communication with the coaches.”

In the spring, Antkiewicz connected on 13 point-after kicks. This fall, he’s hit 12 extra points and is averaging 48.9 yards on kickoffs and 40 yards on 15 punts.

In the St. Ignatius soccer victory, Cardiel opened the scoring in the game’s eighth minute, knocking in a header on a pass from Rivera.

Just 75 seconds later, Antkiewicz struck with his own goal. Taking a pass from DuBoise, the senior raced up the left sideline, cut in and fired an angled shot with his right foot that floated over the goalie and found the goal at the back post.

Antkiewicz knows his quickness can pay off with some big dividends.

“I’ve always been decent at soccer, but it’s my speed that kills. All speed, no skills they joke,” Antkiewicz said. “The coaches told me I’d get 1 or 2 chances and that’s all I might get, so put it through. I was practicing that shot all week in practice.”

Working with a 2-0 lead, the Vikings held off a skilled St. Ignatius squad the rest of the way. Ascencio made a huge diving save on a penalty kick with 18:16 left in the first half.

Sophomore Oscar Quinn Pasin stutter-stepped on the shot, kicking the ball to his left. Ascencio guessed right, deflecting the shot and preserving the shutout.

“I felt confident. As soon as he stepped forward, I started talking to him. I guessed right,” Ascencio said. “It went my way. Even if you guess right, it’s always good to stay calm. Your adrenaline can get ahead of you, and you go past the shot. You’ve got to kill every ball.”

Ascencio denied 4 St. Ignatius shots in the first half and 3 in the second.

He is in his second year as the starting goalkeeper after working as a back-up on the 2019 squad that finished fourth in Class 2A.

Ascencio and his defensive backline, DuBoise, Rivera, senior Thomas Suchecki and junior Michael Rocha, have been incredibly strong for the Vikings.

“To slow people down, our best strength is our communication,” Ascencio said. “We’re there for each other. Rocha covers for everybody if there’s a mistake. It’s having each other’s back and stepping forward. Forget the last game, and focus on the next.”

St. Laurence earned the two-seed at its own Class 2A sectional behind undefeated Payton. The Vikings will host a regional and sectional.

“We’ve overlooked some opponents who knew their game plan and executed,” Alonso said. “If we match or beat the other team’s effort, the result will be there on our end. We’ve got a special group. Things are starting to click, and we need that chemistry and camaraderie. It’s there.”