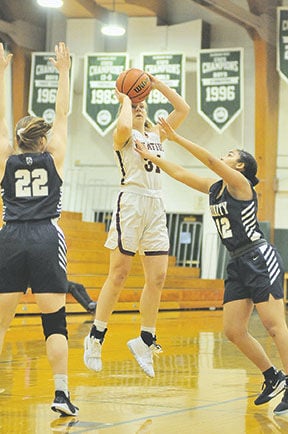 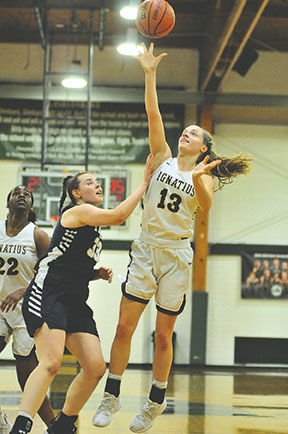 As St. Ignatius worked this season to replace an uber-talented senior class, junior guard Lauren McDonald knew the spotlight would be on her to step up.

However, she didn’t feel any added pressure. She knew the key to the team’s success would be about building a team effort.

McDonald has obviously embraced that role, as witnessed on Jan. 4 when she was named to the All-Tournament team at Glenbard West’s Grow the Game tournament, which highlighted girls basketball and female coaches.

With its brutal schedule, the young but talented Wolfpack continues to find its way, and McDonald is doing her part.

“I talked to the coaches and my parents and knew I’d have a bigger role this year,” McDonald said. “I knew everyone would have to come through though with their role. I was more of a role player last year, but whatever the team needed, I wanted to make my game stronger.”

Although it mounted a furious late rally, St. Ignatius couldn’t get over the hump against Trinity on Jan. 4, falling 51-45 in the Grow the Game seventh-place game.

The first-year tournament featured eight of the best teams in the state, all led by female coaches, along with three showcase games.

St. Ignatius senior Paige Gross enjoyed the opportunity to compete in a tournament meant to highlight the ever-growing world of girls sports.

“It’s a really great thing to have this tournament and this sort of awareness,” Gross said. “It’s going to grow to be a much bigger tournament than it is now. What [Coach Cara Doyle] has talked about is chipping away little pieces [as a girls team] where we can get to bigger things like playing Friday nights at 7:30 like the boys do.”

“When only 25 percent of girls basketball programs in Illinois are female-led, we’re saying to our girls ‘You’re good as a player, but that’s kind of where it ends.’ I really believe in ‘If she sees it, she’ll be it.’ As coaches, we benefitted from Title IX. We have to take it to the next level in leadership and positions of power.”

St. Ignatius will take an 11-8 record into a matchup at Loyola Academy on Jan. 10.

“Overall, we’re playing really well. We’ve just hit a rough patch lately,” McDonald said. “It’s a tough schedule, but we love it. When we’re playing together, with a feel of where each other’s games are, we can do really well again.”

After falling behind by 14 points in the first half against Trinity, McDonald, Gross and Ogele helped spark a comeback in the second.

The Wolfpack cut the deficit to 5 points four times in the fourth but could not get a lead as Trinity drilled 8 of 10 free throws down the stretch.

Nonetheless, Gross and her teammates made the Blazers earn the win.

“We’re a team that’s going to keep fighting and keep picking,” Gross said. “Our past three games were a lot of fights to the finish. We’re learning to grow with each other so we can work off each other. We can get in these big games and get these comeback wins.”