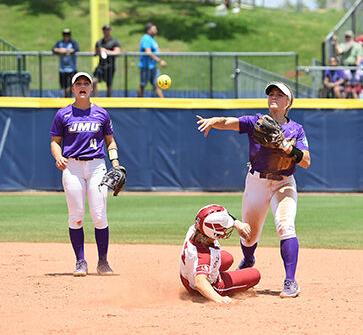 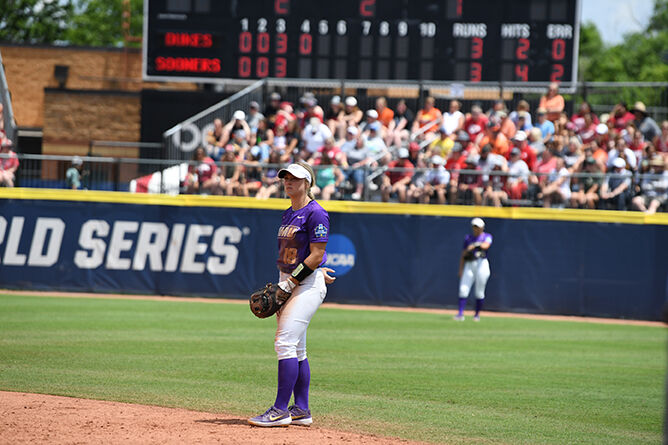 Madison Naujokas waits for the pitch in a College World Series game against Oklahoma. Naujokas won the Defensive Player of the Year in the Colonial Athletic Association for her standout play at second base. (photo courtesy of James Madison University) 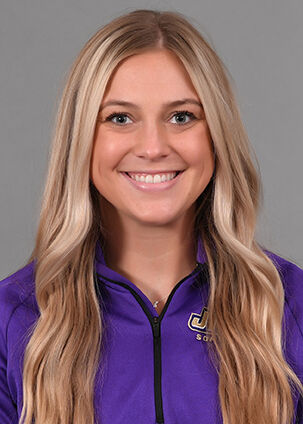 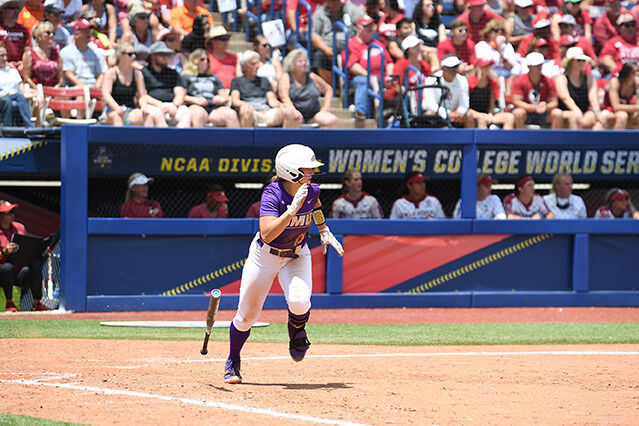 Naujokas hustles up the line in a College World Series game against Oklahoma. In her redshirt senior season for James Madison, Naujokas hit .315 with 4 home runs and 28 RBI. (photo courtesy of James Madison University)

Madison Naujokas waits for the pitch in a College World Series game against Oklahoma. Naujokas won the Defensive Player of the Year in the Colonial Athletic Association for her standout play at second base. (photo courtesy of James Madison University)

Naujokas hustles up the line in a College World Series game against Oklahoma. In her redshirt senior season for James Madison, Naujokas hit .315 with 4 home runs and 28 RBI. (photo courtesy of James Madison University)

Taking the field with her James Madison University (JMU) teammates, Madison Naujokas was a softball player on a mission this spring.

She lost her senior season in 2020 to the pandemic and worried that the shortened year would be the end of her softball career.

But, when the NCAA granted spring sports student-athletes an extra year of eligibility, Naujokas knew she would be coming back to JMU for her redshirt senior season—she had unfinished business.

Naujokas made the most of her extra year, helping lead the Dukes to the program’s first appearance in the College World Series (CWS).

“As soon as I knew it was it was possible to come back, I knew I had to come back and finish my senior season,” Naujokas said. “We had three ‘super-seniors,’ our fifth-year seniors. We’d never had the opportunity to show what we had to give. Going to the College World Series, it showed how we wanted to compete and get to our ultimate goal. It was an easy decision. I was definitely coming back.”

Naujokas, a Mt. Greenwood resident, is a Marist High School alumna (2016) and was a key contributor on the 2015 state championship team.

Playing with the Dukes as a freshman, she hit the ground running and never looked back, becoming a standout defender at second base and a speedy, consistent hitter in the lineup.

For Naujokas, a 5’6” infielder, everything clicked this spring both individually and for the team.

JMU finished 41-4, winning the Colonial Athletic Association (CAA) championship and then making a Cinderella run to the CWS. It was the first time since 2014 that a school from a non-Power 5 conference advanced to the CWS.

“I definitely couldn’t have asked for a better year, regardless of if we didn’t win,” Naujokas said. “I think we had the most heart and passion as a team. That’s what took us so far. We were known more as a team. We wanted to win, but we did so well and did the absolute best we could and got further than we ever expected.”

Naujokas was one of three fifth-year seniors who played key roles for the Dukes, including ace pitcher Odicci Alexander and power-hitting outfielder Kate Gordon.

She also made just 3 errors in 107 chances at second base, winning CAA Defensive Player of the Year honors.

“The defensive player award was awesome. That was my goal since freshman year,” Naujokas said.

Advancing out of regional play with a 3-0 mark, JMU won a best-of-three series with host Mizzou in the super-regional.

Playing in the CWS, the Dukes upset top-seeded Oklahoma on June 3 and then beat Oklahoma State before dropping back-to-back games to Oklahoma in the double-elimination format.

The Sooners went on to beat Florida State in the championship series.

The CWS drew 20,000-plus fans for games, providing a huge atmosphere for the games in Oklahoma City.

“A few times I’d look up in the stands and think, ‘Oh my god, I forgot all these people are here watching,’” Naujokas said. “It was a surreal feeling. I never expected to play in front of that many people in my entire career. We had a big fan base there and at home rooting for us. It wasn’t possible without them.”

She missed one game in her collegiate career and started every game from sophomore year on.

“It’s hard to come in and start as a freshman. I wanted to go in and prove that I’m a good player and I deserve to start,” Naujokas said. “The coaching staff and upperclassmen, they helped develop me into the player I am and allowed me to reach my goals.”

Now with a sports and recreation management degree, she’s back in Chicago taking on a job search. She’s hoping to land a starting position in sports marketing in Virginia.

In the meantime, she’s in Mt. Greenwood this summer coaching a downtown-based travel team, 14U Elite, and she also helped out with summer camps back at Marist.

“I’ve been close forever with [Marist Coach Colleen Phelan],” Naujokas said. “I played for her, and she’s an amazing coach. Watching the girls play, it takes me back to when I was little. Now, I’m seeing the girls I worked with at camp are now on the varsity. It’s awesome to see.”

Phelan said Naujokas was like a celebrity for the young campers, taking photos and signing autographs.

“Madison works camps every year, and she’s a fun, good worker who likes kids and knows the game,” Phelan said. “It was really fun as a RedHawk to watch her on TV and cheer for her. It was even cooler having her back on campus.”