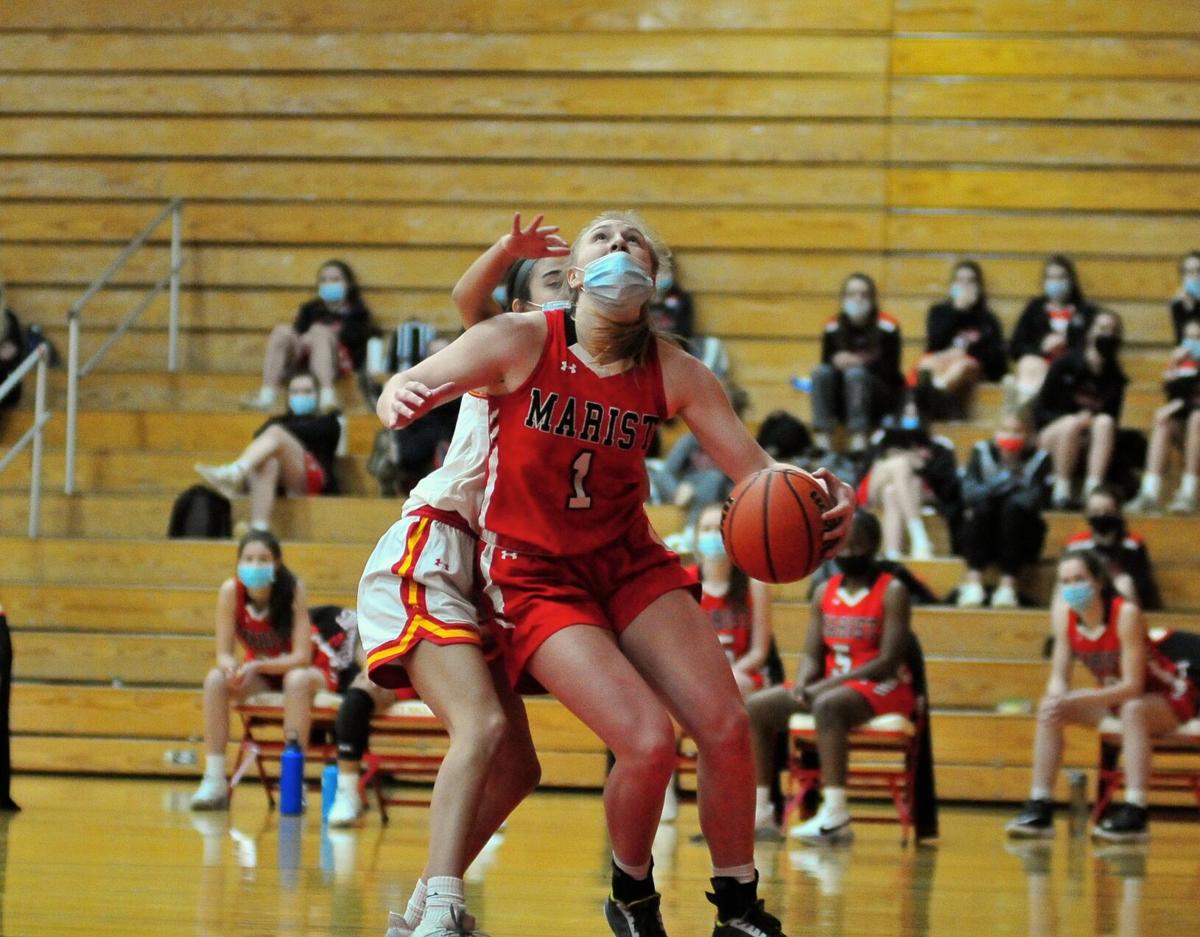 Marist senior forward Sydney Affolter was dominant in the rivalry showdown with Mother McAuley, finishing with 29 points and 13 rebounds. Affolter is a Mt. Greenwood resident. She is an Iowa recruit. (Review photo) 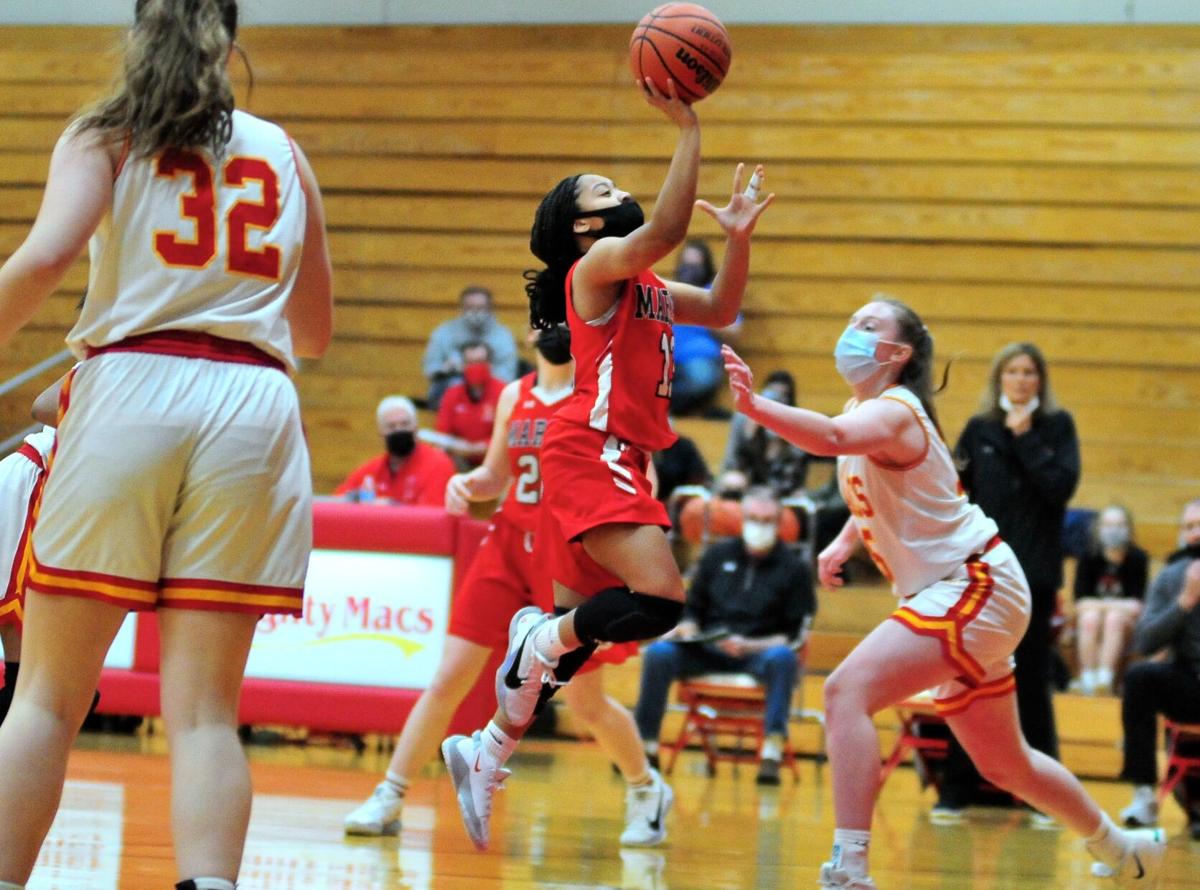 Marist junior guard Kira Chivers puts up a floater in the lane. Chivers finished with 7 points, including a timely 3-pointer to start the third quarter. (Review photo) 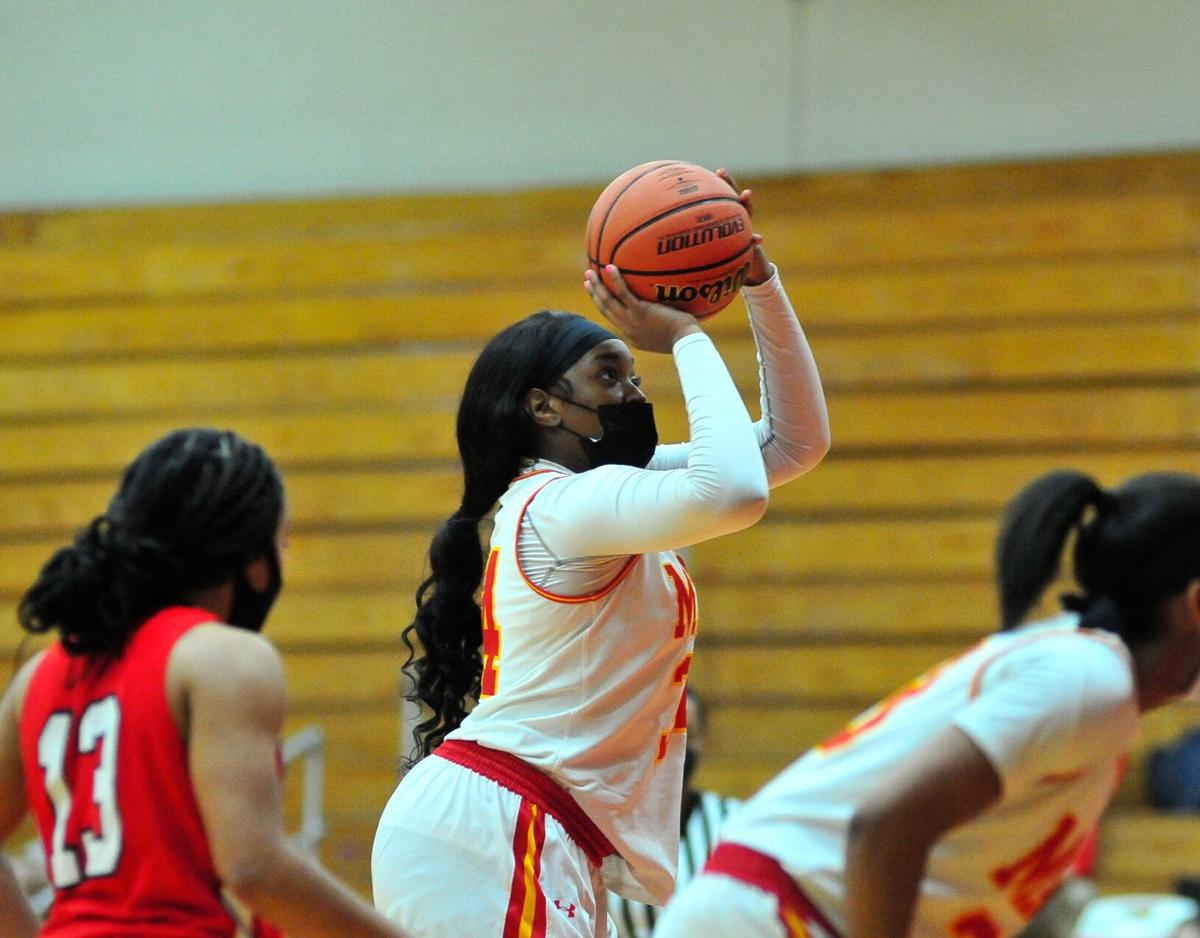 Marist senior forward Sydney Affolter was dominant in the rivalry showdown with Mother McAuley, finishing with 29 points and 13 rebounds. Affolter is a Mt. Greenwood resident. She is an Iowa recruit. (Review photo)

Marist junior guard Kira Chivers puts up a floater in the lane. Chivers finished with 7 points, including a timely 3-pointer to start the third quarter. (Review photo)

Hoping to get a chance to play her senior season, the Marist star forward couldn’t wait to compete against rival Mother McAuley.

She remembered all the previous showdowns, win or lose, with a gym packed to the rafters with dueling student sections and an energy hanging in the air.

Of course, the pandemic has had other ideas.

Marist and host Mother McAuley competed on Feb. 22 in front of a small crowd made up of McAuley players’ parents and the sophomore teams from both schools.

Different from what she expected? Of course, but Affolter will take it.

Marist turned a close game into a runaway with an impressive third quarter as part of a still-enthusiastic and exciting 72-39 victory over McAuley.

“I was definitely super motivated coming into the game,” Affolter said. “Those days where we weren’t playing and everyone else was in other states, that motivated me more than it made me upset. Late nights, early evening [workouts], I’d be in the gym to be prepared for games like this. It’s still a super intense game. I want to leave my mark and show what I’ve got.”

Affolter did that and then some, finishing with a dominant 29 points and 13 rebounds.

Bojan said she enjoyed the chance to play the Mighty Macs along with Marist’s normal schedule in the East Suburban Catholic Conference (ESCC).

“We were waiting for this game. It’s always a big game for us,” Bojan said. “It was a huge team effort. We knew we needed to come out, play hard, run the court and move the ball. Especially with a bad year like this, to come out and play like we did, it was awesome.”

The annual rivalry showdown was closely contested for a half as a young McAuley squad stayed within striking distance in an energetic, back and forth 16 minutes.

Beginning the third quarter though, it was all Marist.

Limited by foul trouble in the first half, Chivers rolled off a pick from Affolter, took the handoff and swished a three at the top of the key.

“Kira coming in and hitting that three was huge,” Bojan said. “The momentum was through the roof on that.”

The run was on for the RedHawks with Bojan following it up with a hard-fought basket inside off an Affolter pass. Bojan hit the free throw to complete the three-point play.

Marist started the third with 19 straight points, going up 54-27.

“We needed to calm down and play our game and not get rattled,” Affolter said. “McAuley was playing good defense. We just needed to work on our offense a little bit more.”

Marist’s team rebounding continues to be a strength through the shortened season. Bojan especially has been a force on the boards.

A 5’11” junior center, Bojan (Mt. Greenwood, Queen of Martyrs) doesn’t have to score to contribute, although she did finish with 9 points. She knows her focus is on defense and rebounding.

“I know my role is to come in, play hard and rebound,” Bojan said. “I need to get those boards. Every possession, I’m thinking about getting the rebound, hit a body and box out. We do a lot of that in practice. It’s knowing I want that ball every possession and going after it.”

Mother McAuley dropped to 2-5 with the rivalry loss.

Junior guard Nyla Walker transferred from Marist to McAuley after her freshman year. She knows brighter days are ahead as a young roster finds its way.

“Moving forward, we’ve got to keep that same intensity like the first half,” Walker said. “Box out and communicate as a team. We all make mistakes so you keep picking each other up. We can’t let our heads go down. Keep our heads up.”

With only three weeks remaining in the season, Coach Keisha Newell wants her team to keep learning and keep working.

“We need to let them get their experience against really good teams,” Newell said. “It shows them they have not arrived. They have to earn this. If they want to be an elite team, they have to continue to get better.”

Still, even with some tough losses, Newell is extremely positive about her team’s fight.

“We’ve got the talent and will to compete,” Newell said. “It’s growing pains we all have to learn from. We’ve got to step our game up, put the work in at practice and continue to get better. We’ll be all right.”