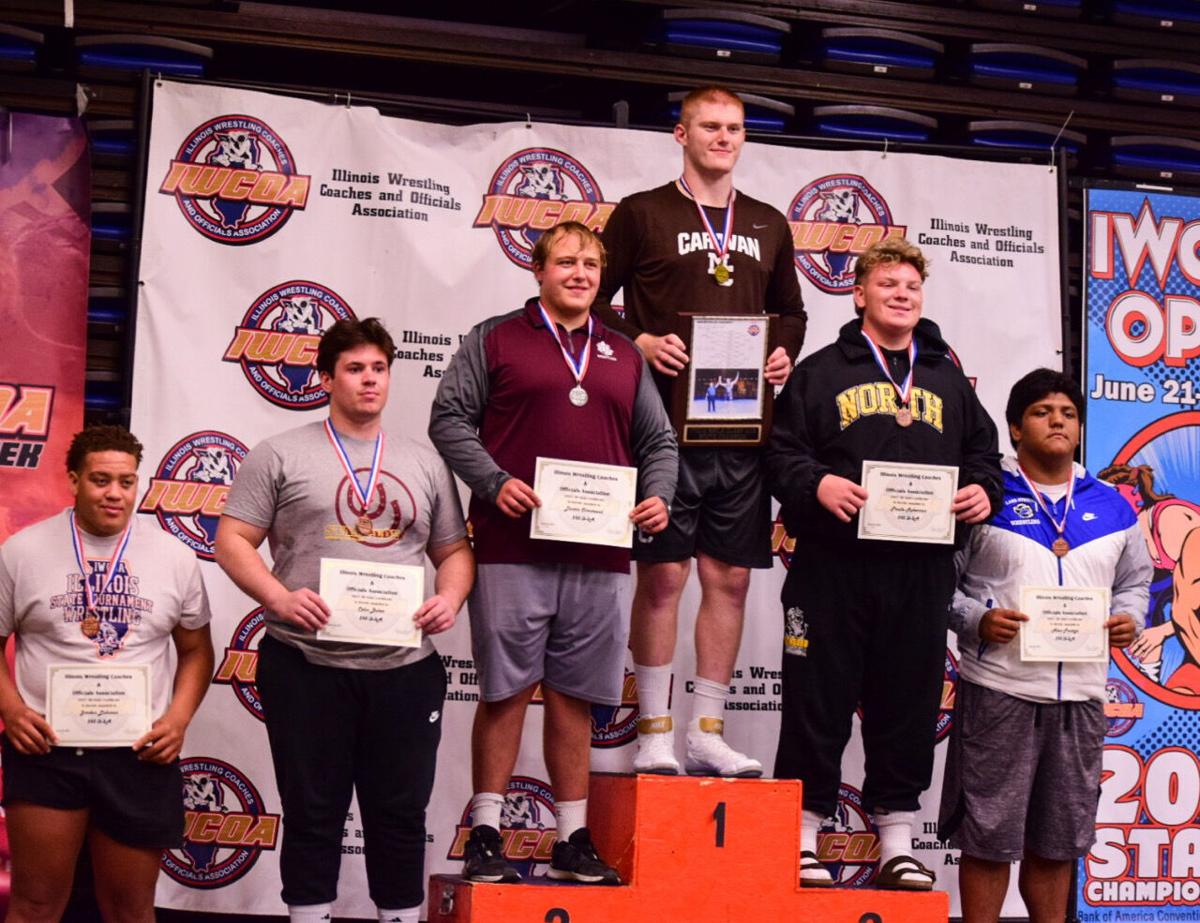 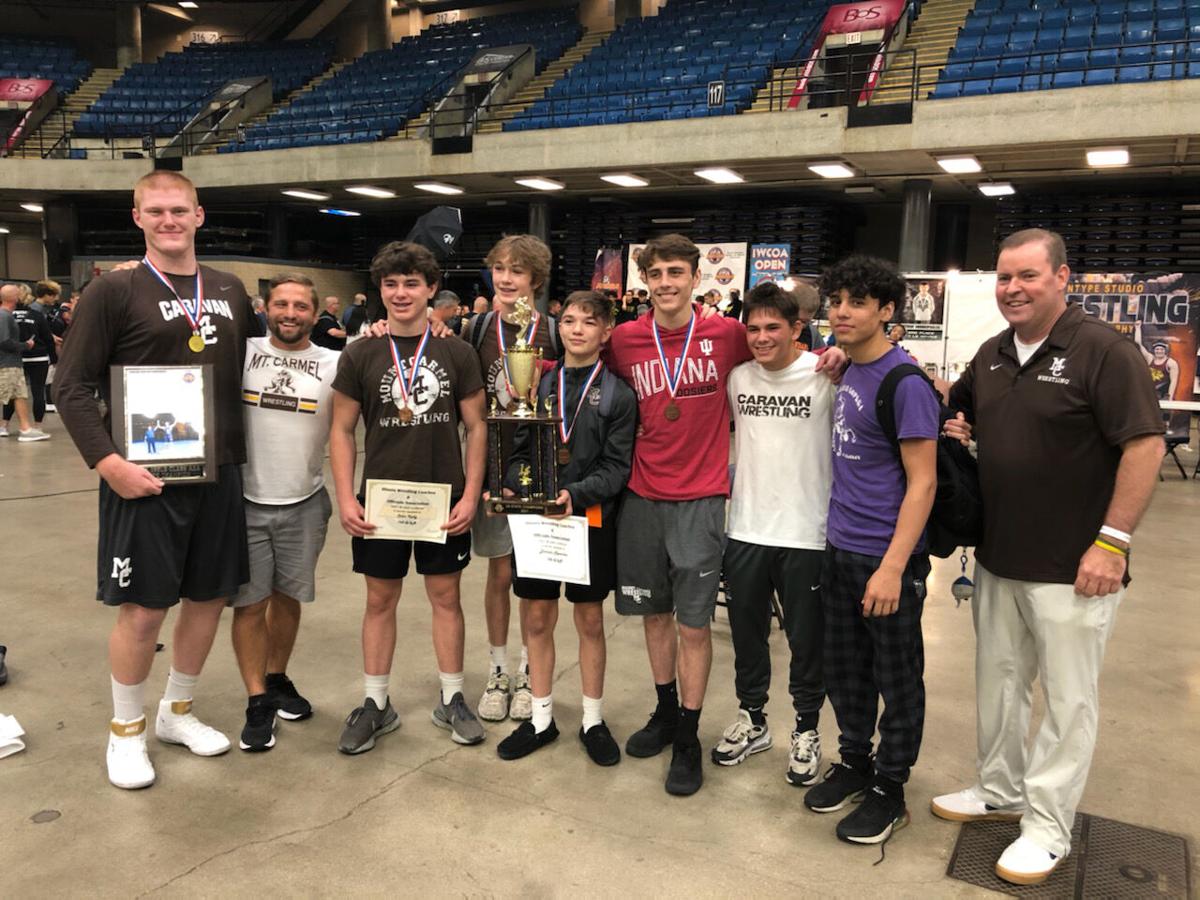 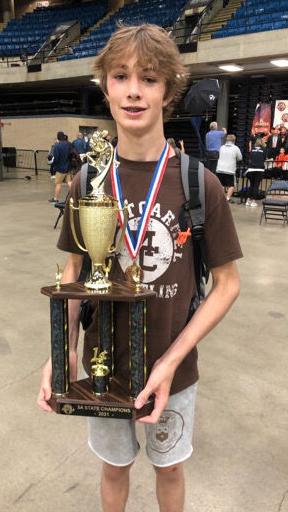 Mt. Carmel freshman Eddie Enright Jr. finished fourth at 120 pounds in Class 3A for the Caravan. Enright totaled a 13-4 record in his freshman season. (photo courtesy of Ed Enright)

Mt. Carmel freshman Eddie Enright Jr. finished fourth at 120 pounds in Class 3A for the Caravan. Enright totaled a 13-4 record in his freshman season. (photo courtesy of Ed Enright)

Ryan Boersma is no stranger to wrestling in pressure situations.

Wrestling at heavyweight, the Mt. Carmel junior is often the last wrestler to compete in a dual meet.

With the Caravan chasing a state title as a team, Boersma was ready to bring the championship home.

“I’m usually wrestling last at heavyweight, so I’m used to it. You know [the final result] can come down to you,” Boersma said. “I don’t even know. I was definitely excited and a little relieved just because there is pressure to win. It was a close race though, but we sealed the win. I’m really excited for the team.”

The state tournament was held June 24-26 at the Bank of Springfield Center.

The tournament was conducted by the Illinois Wrestling Coaches and Officials Association (IWCOA) and was organized after the Illinois High School Association (IHSA) chose to have a wrestling season late in the spring but not host a state series.

Wrestling is scheduled November through February in a normal IHSA season, but it was pushed back to the spring due to health restrictions.

Boersma said he and his teammates wanted to make the best of the opportunity.

“We have a really good team, and I was excited to be a part of it,” Boersma said. “We have a good dual team, but we had some guys not wrestle for us this spring. Glenbard North had 11 wrestlers at state, and we had six. We still won. We’ve got a lot of good wrestlers in the room.”

Boersma transferred to Mt. Carmel from Providence Catholic after his sophomore year when his family moved to Tinley Park.

For the Celtics, Boersma finished fifth in Class 3A as a sophomore in 2020.

He is also a lineman for the Caravan football team. With football and wrestling played back to back this spring, the 6’6” Boersma was already in great physical condition, but he mixed in plenty of wrestling workouts with the football workouts.

He finished the shortened season with a 12-0 record.

“I was probably at 275 during football, but I slimmed down to 265 by state wrestling,” Boersma said. “You lose weight when you’re practicing. I felt more agile and a lot faster competing at 265.”

In the championship, Olmstead was twice called for stalling.

Boersma delivered a big takedown in the third round to seal the win.

“I wrestled against him last summer and won 4-2 in overtime,” Boersma said. “I really wanted that legit takedown this time around.”

Boersma committed this summer to continue his academic-athletic career as a wrestler at the University of Missouri.

Sophomore Caleb Drousias (113 pounds) was also a state wrestler for the Caravan.

A standout wrestler locally for the Mustang Wrestling Club, the freshman loved the chance to compete with his team through the unique spring season.

“It was a lot different. I wasn’t used to wrestling in duals that much,” Enright said. “I’d almost always wrestled individually. The whole team and my partners really helped me out. Going out together as a team, it was a lot more fun. We’re all together and all working to win.”

Enright lost a tough 6-4 decision to Stevenson sophomore Lorenzo Frezza in the third-place match at 120 pounds.

Looking ahead to hopefully a normal IHSA season this winter, the Caravan athletes are excited to get going and chase another state title.

“Everybody is super-excited, especially getting back to normal and go for the state title,” Enright said. “We’ve got some really strong freshmen coming in, so we should have a fun team. We want to beat people up with the full team and take first again.”