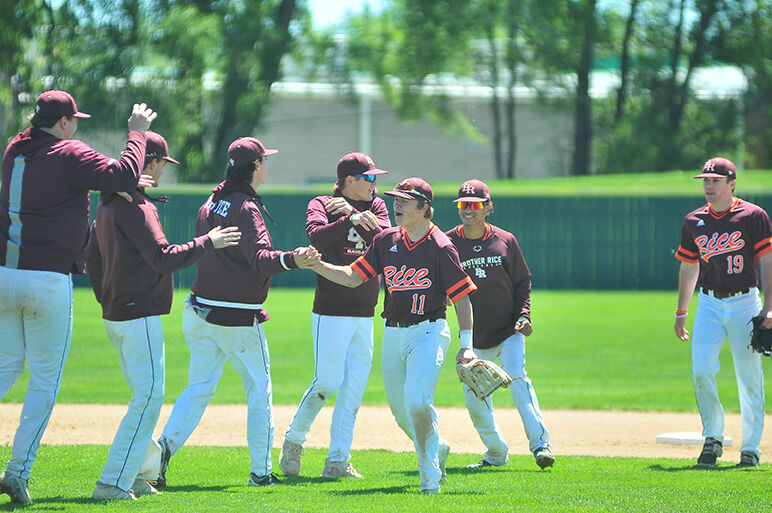 Br. Rice junior Nick Daugherty (11) celebrates with his teammates after the Crusaders clinched a share of the Chicago Catholic League (CCL)-Blue title. Daugherty’s 2-run double in the 11th inning proved to be the game-winner. (Review photo) 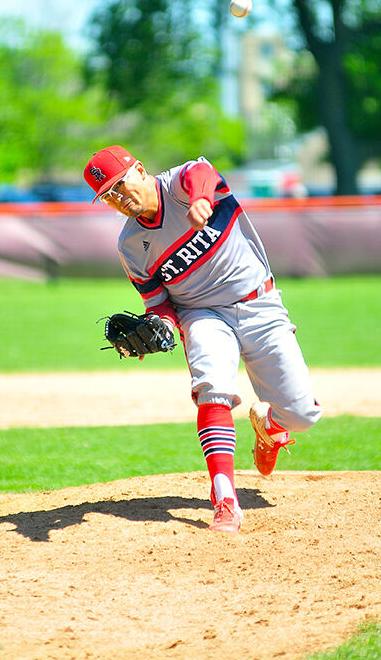 St. Rita starter Al Holguin fires a pitch against Br. Rice. Holguin earned the win with 4 shutout innings against the Crusaders and helped St. Rita earn a share of the CCL-Blue title. He also knocked in 3 runs. (Review photo)

Br. Rice junior Nick Daugherty (11) celebrates with his teammates after the Crusaders clinched a share of the Chicago Catholic League (CCL)-Blue title. Daugherty’s 2-run double in the 11th inning proved to be the game-winner. (Review photo)

St. Rita starter Al Holguin fires a pitch against Br. Rice. Holguin earned the win with 4 shutout innings against the Crusaders and helped St. Rita earn a share of the CCL-Blue title. He also knocked in 3 runs. (Review photo)

For junior Nick Daugherty and his Br. Rice teammates, it was a long 36 hours.

With the Crusaders tied against St. Rita in extra innings on May 27—and a share of the league title on the line—the game was called on account of darkness. It was then postponed another day because of the weather.

Nonetheless, on May 29, Daugherty and Br. Rice made the most of their return.

A 2-run double from Daugherty in the top of the 11th lifted Br. Rice to a thrilling 11-9 victory over host St. Rita to clinch a share of the Chicago Catholic League (CCL)-Blue title.

“It feels amazing. Our seniors, they lost out on their junior season, which would have been a big year,” Daugherty said. “It’s big to gain some momentum heading into the playoffs. It shows how tough we are as a team.”

However, the CCL-Blue drama was far from over.

Later that day, St. Rita won Game 2 of the home-and-away series, rolling to an 11-0 victory in 6 innings to clinch its share of the title.

St. Laurence also clinched a share of the CCL-Blue after playing a home doubleheader against Loyola, sweeping the day and creating a three-way tie at the top of the standings as all three teams finished the season at 8-4.

For the Crusaders in Game 1, Daugherty ripped a pitch to center field in the 11th, bringing in Will Flanigan and Jack Lausch to go up 11-9.

“We were super-psyched for the game,” Daugherty said. “I was trying to slow everything down. The wind helped me out and carried it to deep center. I thought for sure the center fielder was under it; but it kept drifting, and I hit the burners.”

Closing out the win, senior John Creviston returned to the mound for the bottom half of the inning.

The hard-throwing southpaw had been shaky in the 10th inning on May 27, but he emerged unscathed, courtesy of a double play.

“[Coach Sean McBride] told me after the game Thursday that I’d be ‘starting’ today,” Creviston said. “I tried to stay grounded. You’ve got to accept the nerves. You’re going to have them, but it’s the same game. It’s just baseball.”

Senior Arturo Mora threw a gem in relief in Game 1, striking out 6 over 7 innings of work as he pitched the third through ninth innings.

St. Rita senior Al Holguin had not thrown a pitch for the Mustangs in the last month as he rested his arm.

He took the mound against Br. Rice in the 11th inning in Game 1 and took the loss.

A few hours later, Holguin returned to the mound for Game 2 and fired a gem, earning the win with 4 shutout innings as he allowed 1 hit and 2 walks with 4 strikeouts to help the Mustangs clinch their share of the CCL-Blue.

“I knew I was starting the second game for sure, but [Coach John Nee] said he wanted to try and win the first one,” Holguin said. “I took on the challenge. I didn’t have my best stuff in Game 1, but I settled in this afternoon and did have it. It was all about my mindset.”

Holguin gave up 1 hit, a Luke Lawrence single, but otherwise, he shut down a potent Crusaders lineup.

“It feels great to win it. We weren’t able to play last year, so to win it this year is great,” Holguin said. “I’ve always believed in this team, going back to the offseason. I know we can go out and beat good teams.”

Holguin also knocked in 3 runs, finishing a triple shy of the cycle.

St. Rita scored a run in the first on a Holguin RBI double and then added 4 runs in the second and never looked back.

The Mustangs punctuated the effort with a 6-run sixth inning that featured 3 home runs: a 3-run bomb from Bobby Atkinson, a 2-run pinch-hit blast from Tommy Ulatowski and a solo shot from Holguin.

“We won the Blue as sophomores, but we did this for our seniors last year,” Atkinson said. “They never had their chance to win it, so this meant everything for us and for them.”

Atkinson has been destroying baseballs all season for the Mustangs. The senior first baseman said he’s seeing the ball like never before.

“I got a fastball inside on the home run. I hadn’t gotten one of those all series,” Atkinson said. “I got the barrel on it and knew it was gone. It felt great. I’m seeing the ball better than I ever have, and I’m staying within myself at the plate.”