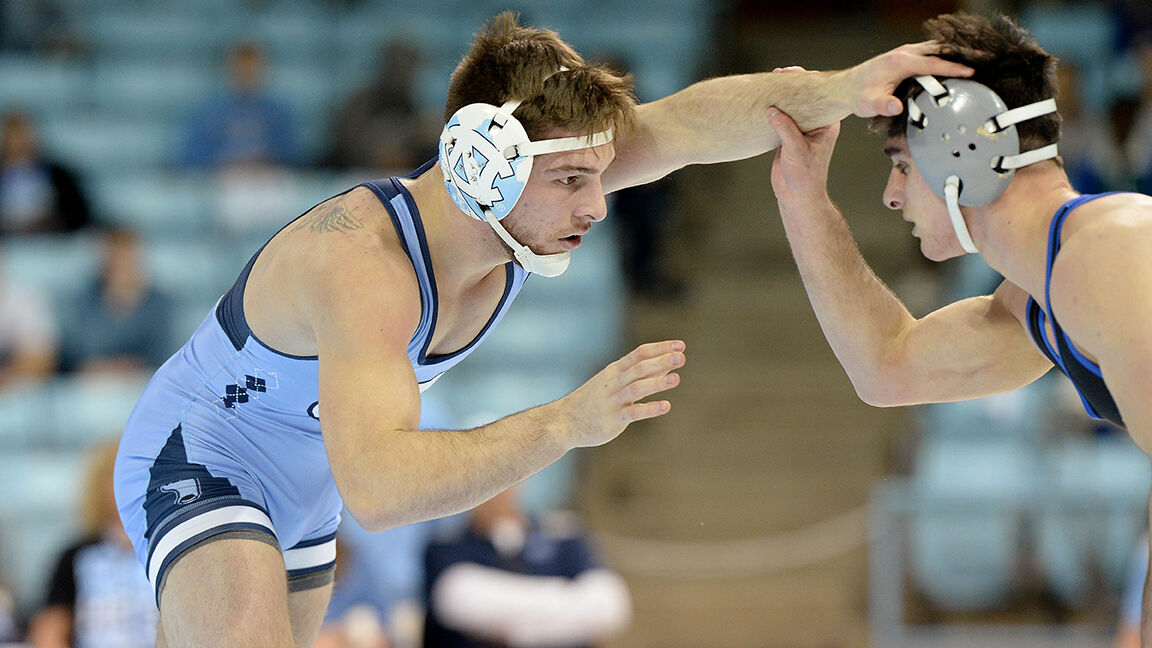 Austin O’Connor, a St. Rita grad, wrestles in a match last season. Now in his redshirt junior season at the University of North Carolina, O’Connor opened the season as the top-ranked wrestler in the country at 149 pounds. (photo courtesy of UNC Athletics) 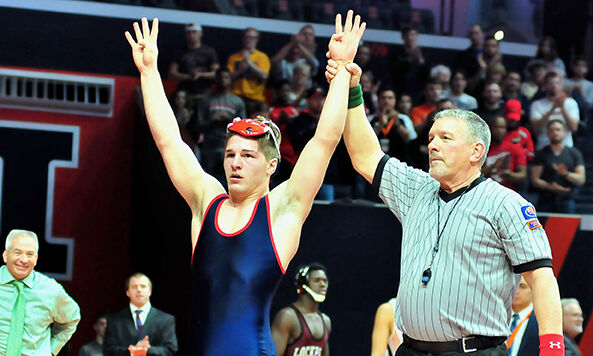 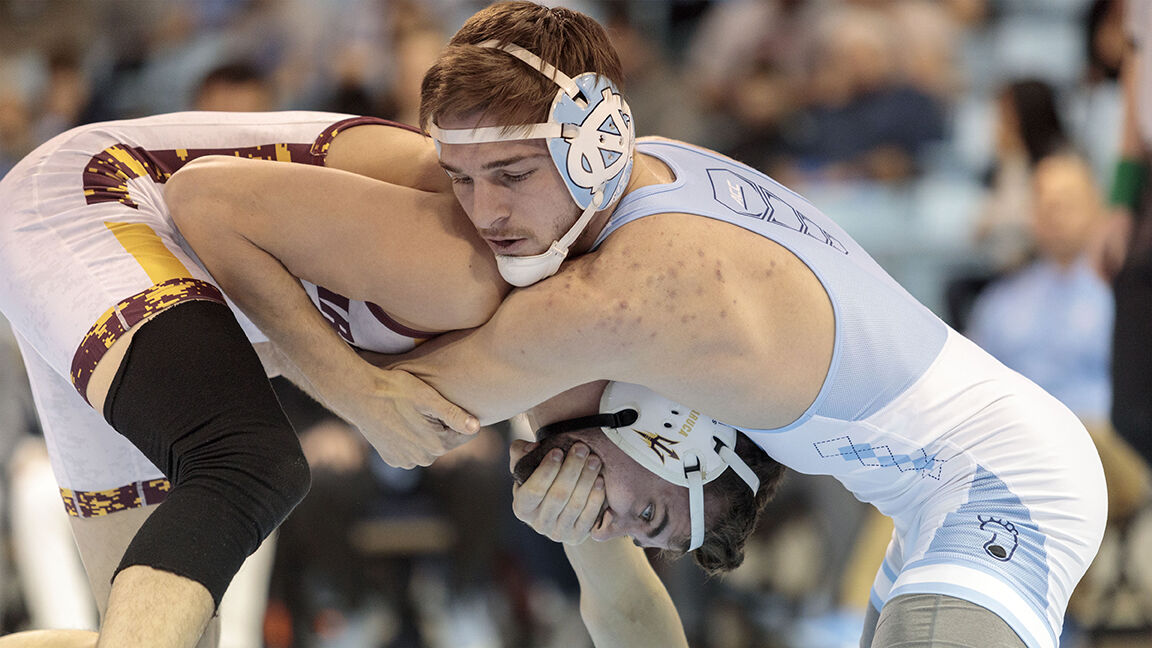 O’Connor finished 34-6 last season for North Carolina. He was the No.-2 seed in the NCAA tournament at 149 pounds, but the competition was canceled due to the pandemic. (photo courtesy of UNC Athletics) 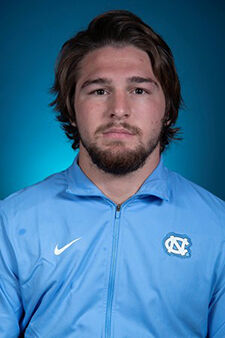 Austin O’Connor, a St. Rita grad, wrestles in a match last season. Now in his redshirt junior season at the University of North Carolina, O’Connor opened the season as the top-ranked wrestler in the country at 149 pounds. (photo courtesy of UNC Athletics)

O’Connor finished 34-6 last season for North Carolina. He was the No.-2 seed in the NCAA tournament at 149 pounds, but the competition was canceled due to the pandemic. (photo courtesy of UNC Athletics)

Last March, Austin O’Connor was ready to go out and wrestle for the national championship.

He had powered through his redshirt sophomore season at the University of North Carolina (UNC), compiling a dominant 25-1 record for the Tar Heels.

But then, the mat was pulled out from under him.

The NCAA championships had been canceled due to the pandemic.

National title aspirations would have to wait for O’Connor, a St. Rita High School graduate.

“I was really excited heading into the tournament. I was in a good spot in the bracket, and I had a good chance to win,” O’Connor said. “I wasn’t too nervous. My weight was down, and I felt great. When it was canceled, it was just unbelievable. You never expect anything like that, especially that last week right before the tournament.”

One of the state’s all-time best high school wrestlers, O’Connor won four state titles and finished with an amazing 180-4 record over his four seasons at St. Rita.

Now in his fourth year at UNC, he’s one of the nation’s best.

O’Connor is currently the top-ranked wrestler at 149 pounds in the national rankings. He was named First-Team All-American last season.

However, with the coronavirus pushing the start of the 2020-21 season back, now he’s just looking to get back on the mat and start a new campaign.

“I’m definitely trying to make the best of it,” O’Connor said. “I’m trying to focus on what I can control and roll with things. I’m staying ready for when we do get a chance to get out there on the mats.”

UNC was scheduled to open the season with a nonconference home dual meet on Jan. 1 against Campbell, but the match was canceled due to positive coronavirus tests.

The Tar Heels finally took the mat on Jan. 10 for a dual, defeating Gardner-Webb 45-0 at home. O’Connor posted a quick victory at 149 pounds, prevailing with a win by fall in just 47 seconds.

UNC will open its Atlantic Coast Conference (ACC) schedule on Jan. 15 at home against Virginia Tech. A condensed schedule will run into late February before the ACC championships (Feb. 28) and the NCAA championships (March 18).

After missing out on a chance to wrestle for a national title last year, the goal is as straightforward as it gets for O’Connor: a national championship or bust.

“Pretty much. I want to have a dominant season,” O’Connor said. “I want to get pins for the team and help us to our best ranking as we can. I want to be on top of the podium at the end of the year.”

Arriving on campus as a freshman for the 2017-18 season, O’Connor redshirted, meaning he could compete in open tournaments but not UNC’s main schedule without costing him a year of eligibility.

He finished with a 15-3 record, but it was the practices in the wrestling room that paid the biggest dividends.

O’Connor said wrestling with a fellow 149-pound competitor, Troy Heilmann, helped provide a huge learning experience as he found his way at the Division I level.

“I knew coming in that we had a great coaching staff that would help me with different styles,” O’Connor said. “In high school, I knew I was one of the best wrestlers around. I came in here, and Troy was the top dog. He was whooping my butt every day. Having him in the room, he pushed me every day. That started to translate for me to the mats.”

After his redshirt year, O’Connor went 34-6 as a redshirt freshman. He finished third in the country at 149 pounds at the NCAA tournament, the best finish at nationals for a UNC wrestler since 1996.

With this season pushed back, UNC did host the Tar Heel Wrestling Open in November, a series of exhibition matches featuring some big-name talents. O’Connor was featured, defeating Dean Heil 11-0 in his match.

Heil was a two-time national champ at Oklahoma State University, graduating in 2018.

O’Connor said he will continue working this season toward plenty of bigger and better wins.