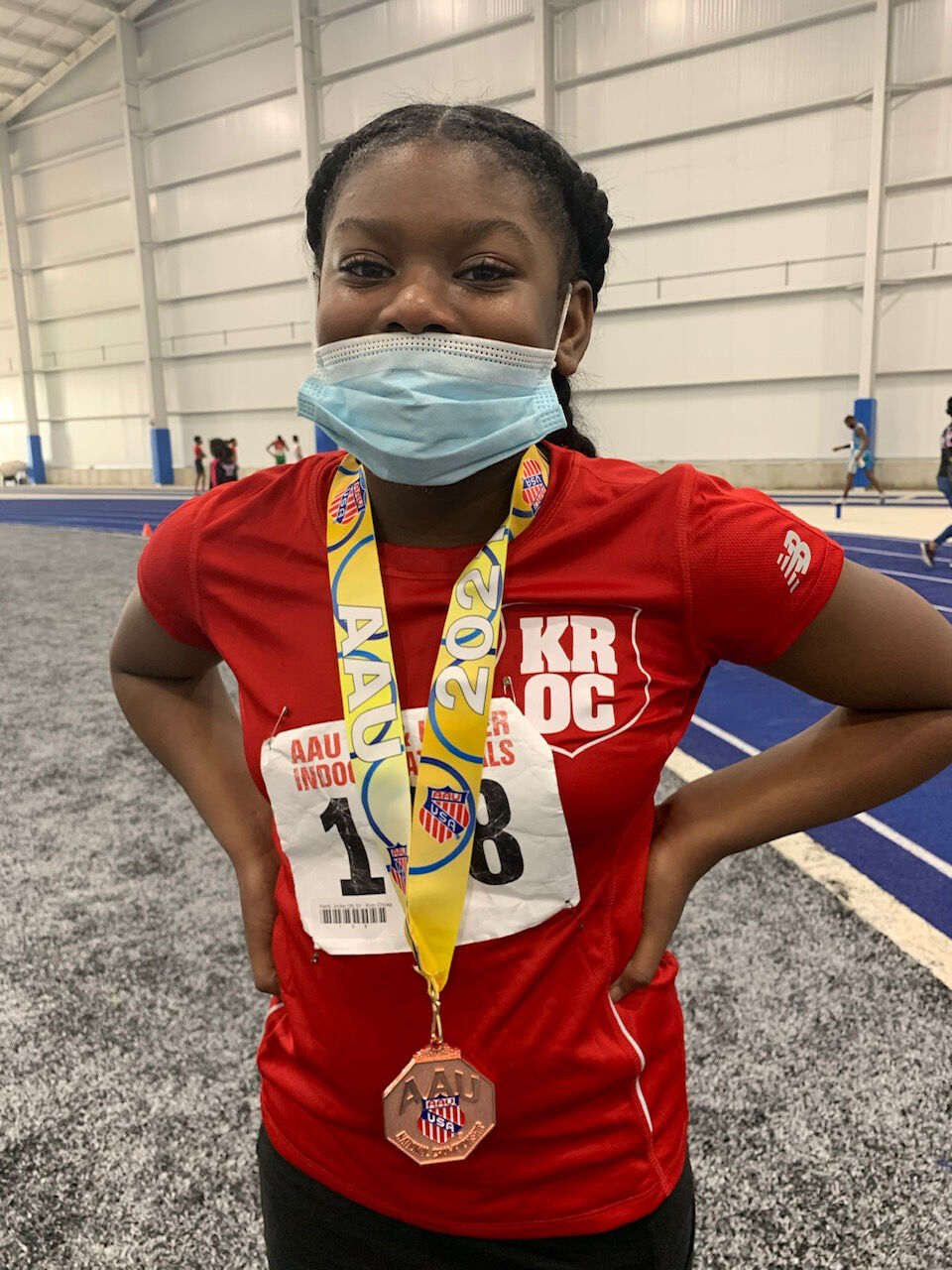 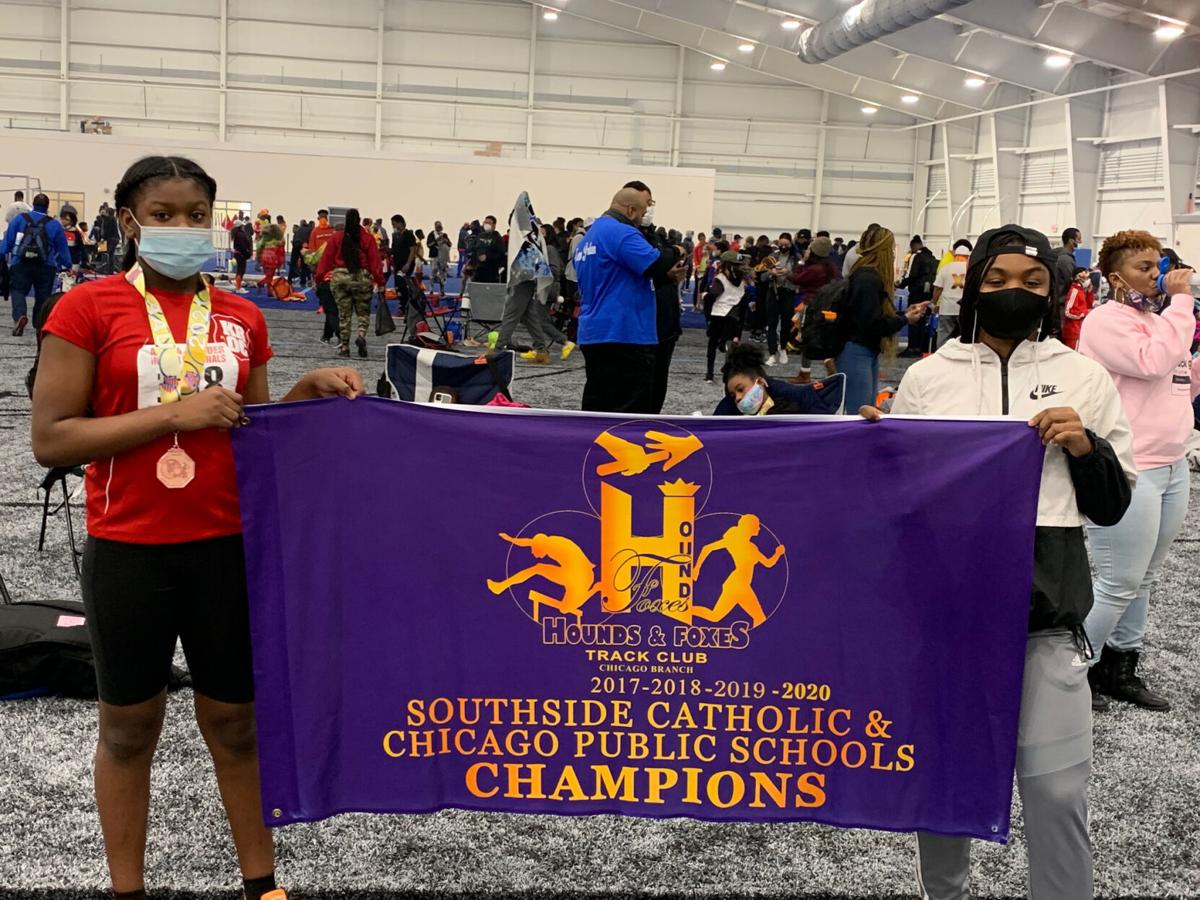 Jordan Hamb (left) and Asia Thomas are both key runners for the Kroc Center Hounds and Foxes Track Club. Hamb is a seventh-grader at Sutherland, and Thomas is a sophomore at Kenwood High School. (photo courtesy of Lakita Montgomery)

Jordan Hamb (left) and Asia Thomas are both key runners for the Kroc Center Hounds and Foxes Track Club. Hamb is a seventh-grader at Sutherland, and Thomas is a sophomore at Kenwood High School. (photo courtesy of Lakita Montgomery)

Like so many young student-athletes across the country, 12-year-old Jordan Hamb tried to make the best of the last year with sports being limited by the pandemic.

A seventh-grader at Sutherland Elementary School, Hamb did her classes through Zoom at home. She played on her phone and tablet at home.

Mostly, Hamb got used to being at home—a lot.

“I’ve become more of a house person over the year,” Hamb said. “I want to stay in the house more than go out. My mom [Lakita Montgomery] said to go back to track.”

Once restrictions were eased last summer and into the fall, Hamb returned and started practicing again with the Kroc Center Hounds and Foxes, a local running club.

Fully getting back into the swing of things this winter, Hamb made the most of her first indoor track and field meet, earning All-American honors in two events at the AAU 14U North America Championships March 5-7 at Eastern Michigan University (EMU).

Competing in the 13-year-old division, Hamb finished fifth in the long jump and eighth in the 60-meter dash.

For Hamb, it was a happy return to the track, albeit one with some anxiety.

“It was my first meet in over a year. I was very nervous,” Hamb said. “I didn’t know if I’d gotten faster or slower. And those girls, I was running with 13-year-old girls.”

Hamb was originally scheduled to compete in four events but ultimately did not enter the 60-meter hurdles at the Lincoln Athletic Building on the EMU campus.

Competing on a 300-meter track took a little bit of adjusting for Hamb as opposed to the 200- and 400-meter tracks she normally runs on.

Still, she made the best of it.

“I could have done better, but I pushed myself as well as I could,” Hamb said. “On Sunday in the finals, my stomach was hurting, but I did pretty good, pretty decent. I hadn’t done the long jump in a while. I was really proud of myself.”

Montgomery said that, after a tough year with the pandemic limiting what her daughter and so many young athletes could do athletically, she is especially proud of her daughter’s standout performance.

“As a mother, you look and say, ‘Do I want my kid sitting in this house on the computer and phone or be active like she’s always been?’” she said. “I wanted her to get back into the things she normally does. She did pretty dog-gone good running that first meet.”

Hamb said she will continue to run with the Hounds and Foxes this spring and summer in hopes of qualifying for the Junior Olympics in July.

She’s staying busy off the track, too, balancing gymnastics practices, vocal and acting classes and, maybe, some volleyball whenever it is allowed back at school.

No matter what event she’s competing in, Hamb is always looking to improve.

“I’ll be scared, even nervous, once I’m in the race and running,” Hamb said. “I put that fear into my running to make me do better.”

Mercy Home for Boys & Girls is looking for a Driver