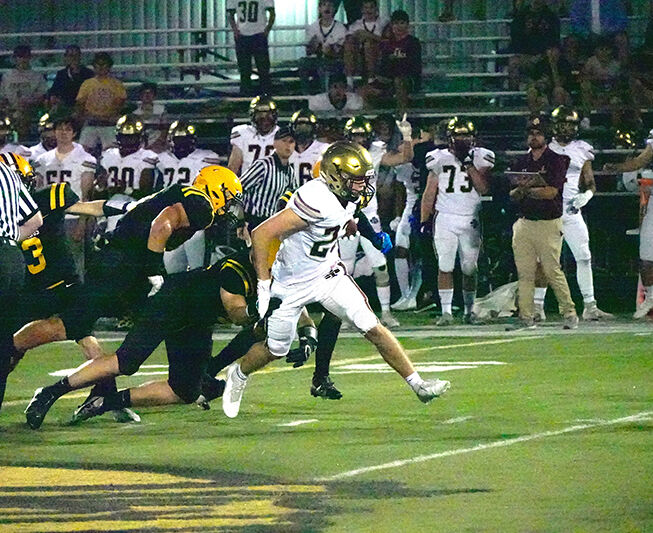 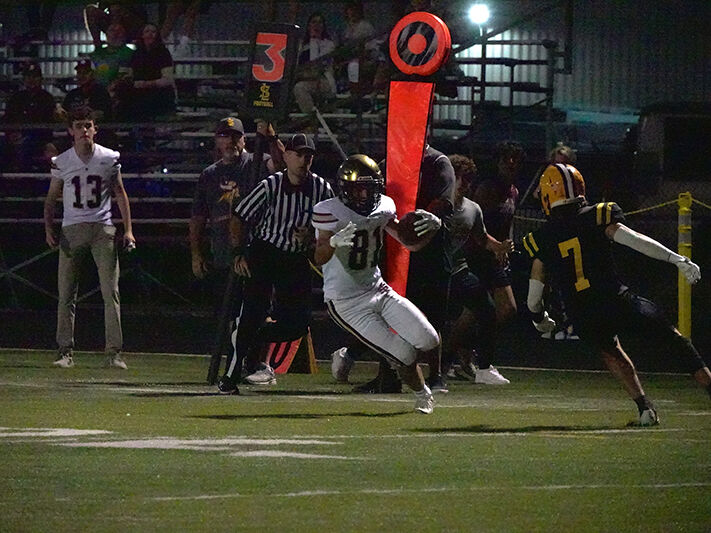 St. Ignatius junior Albert Connor works past a defender during his 18-yard touchdown run in the first quarter. The Wolfpack held a commanding 21-0 lead at halftime. (Review photo) 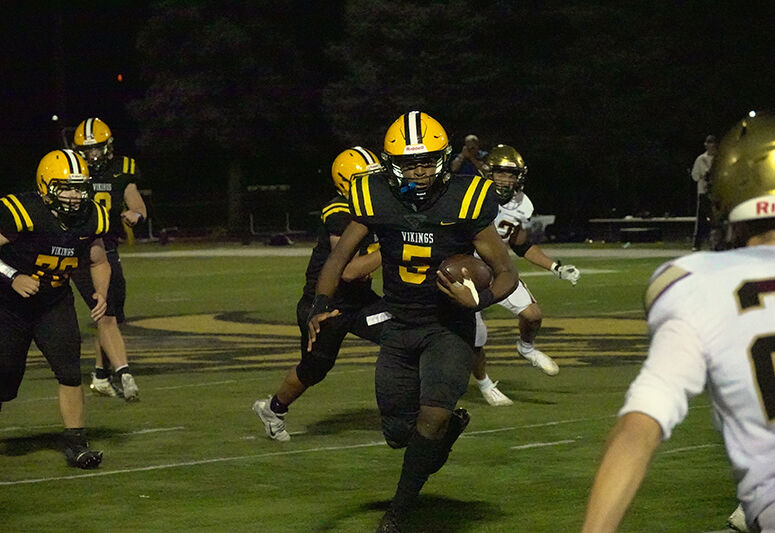 St. Laurence senior quarterback Brandon McCoy piles up yardage on a second-half run. McCoy threw for 118 yards and rushed for 23 yards for the Vikings. (Review photo)

St. Ignatius junior Albert Connor works past a defender during his 18-yard touchdown run in the first quarter. The Wolfpack held a commanding 21-0 lead at halftime. (Review photo)

St. Laurence senior quarterback Brandon McCoy piles up yardage on a second-half run. McCoy threw for 118 yards and rushed for 23 yards for the Vikings. (Review photo)

In opening the season with back-to-back nonconference wins, St. Ignatius made short work of Von Steuben and Bremen, scoring a combined 119 points while giving up just 8.

However, heading into the meat of its conference schedule, the Wolfpack was looking to make a statement.

Playing at St. Laurence on Sept. 10 in a Chicago Catholic League/East Suburban Catholic Conference (CCL/ESCC) crossover, St. Ignatius dominated with its run game on the way to an efficient and convincing 21-0 victory.

St. Ignatius improved its record to 3-0.

“All week in practice we knew this was a statement game,” said junior running back Vinny Rugai. “We wanted to come in and show people what we were about. I think we accomplished that tonight, and we let people know we’re here to stay.”

St. Ignatius will travel to CCL/ESCC-White foe Marmion Academy on Sept. 17 in Week 4.

St. Ignatius Coach Matt Miller loved his team’s road win against a CCL/ESCC-Orange opponent, the division above the White.

“We talked about it all week, making a statement and showing we can play in the Catholic League,” Miller said. “Everyone’s always playing for respect, and as we’re building the program, we want to be able to beat good programs. St. Laurence is definitely a good program.”

St. Ignatius stuck with its bread-and-butter attack, unleashing its option attack with a patient, ground-pounding offense.

After rushing for 3 touchdowns in a Week 2 win at Bremen, Rugai continued his hot tear, rushing 21 times for 92 yards and 2 touchdowns.

“Our offensive line was really getting off the ball pretty well,” Rugai said. “St. Laurence was bringing a lot of pressure in the box and swarming the A-gap. It was great to see the option in full force. It was our first game against a really strong defense.”

Junior Albert Connor scored first for St. Ignatius on a jet sweep run to the left, blasting through to the end zone for an 18-yard TD.

After the defense held on a St. Laurence fourth-down attempt, including a key Jake Lo tackle for loss, St. Ignatius marched 64 yards in a little over 3 minutes.

Rugai capped the drive with a 6-yard TD, the junior diving into the end zone.

“Jake and I have been a good 1-2 punch. We complement each other really well,” Rugai said. “We never let up, and if we’re in the game, we’re going full force.”

Rugai scored his second touchdown on a 1-yard plunge late in the second as St. Ignatius took a commanding 21-0 lead into halftime.

“We’ve never been this big on the O-line. We average 235 pounds,” Miller said. “When you need that yard and you have that extra weight behind you, it’s huge. We’ve had some years where our tackles were 160 and 170 pounds.”

“Our first TD gave us a boost. We needed it,” said sophomore lineman Justin Scott. “The defense knew to stay locked in and not let up. We wanted this game. It’s the D-line setting up the plays for the linebackers and the linebackers opening gaps and making plays and getting us those loss of yards.”

The Vikings were unable to convert two key fourth-down plays in the first half.

“We’re hurting ourselves more than I like to see,” said St. Laurence Coach Adam Nissen. “Our first game, we had 8 drops. We had a drop tonight that could have been a TD. We’re not taking care of the ball and not fundamentally sound. It’s a couple good teams, but we’re not doing anything to help ourselves. We’ve got to get back to work and get it fixed.”