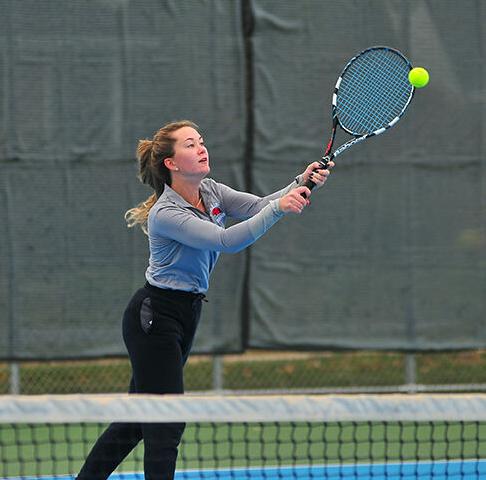 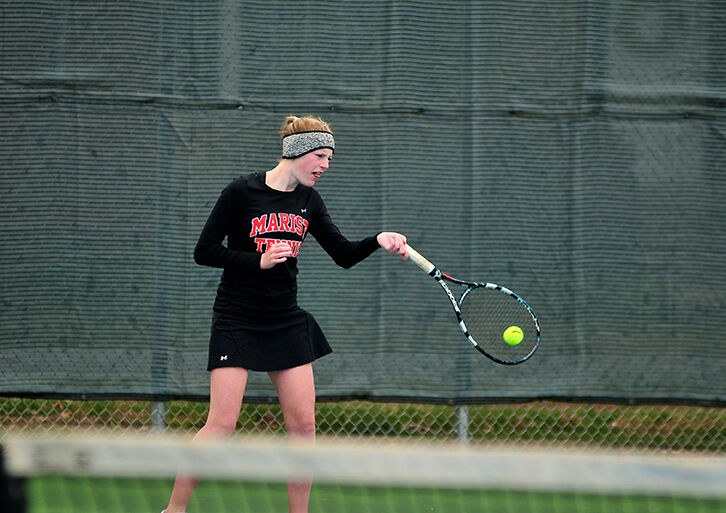 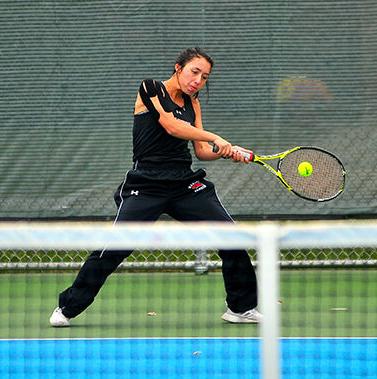 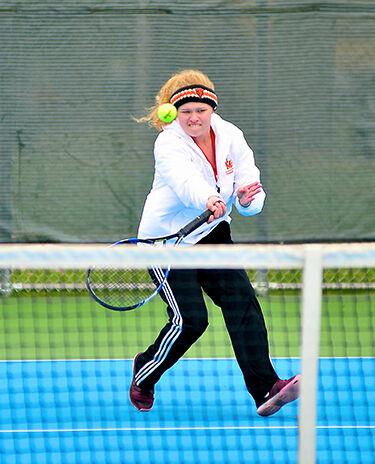 Mother McAuley junior Leah Zemgulys charges the net to make a shot in the third-place match. Zemgulys is a Beverly resident. (Review photo)

Mother McAuley junior Leah Zemgulys charges the net to make a shot in the third-place match. Zemgulys is a Beverly resident. (Review photo)

Senior Sonya Dremak and junior Molly Malloy spent much of the regular season competing in singles.

But, the Marist duo knew where they’d end the season, back as a doubles team—and one to be reckoned with.

The doubles team lost 6-2, 6-0 to Sandburg’s Viyaletta Hordzich and Jocelyn Canellis in the championship match.

With no state meet scheduled due to the health crisis, the sectional marked the end of the girls tennis season. Typically, the top four singles players and top four doubles teams advance to the state meet.

Pairing up for one last match with Dremak, Malloy wanted to make the most of it, win or lose.

“It was our last match together, but we didn’t want to take things too seriously,” Malloy said. “We wanted to enjoy it and have fun, especially with no state meet.”

Dremak and Malloy qualified for state in fall 2019 and with their second-place finish would have qualified again this year.

Dremak was glad the RedHawks made the most of the season that was so heavily impacted by the pandemic.

“It was a really good season,” Dremak said. “Through all the craziness, we all put our best foot forward. We worked around it and made it this far. We did really well, so I’m proud of us all.”

Malloy will headline a solid group of underclassmen expected back next year for Coach Nicole Selvaggio.

“It’s been all fun being one of the younger girls on the team,” Malloy said. “Now I’m thinking ‘OK, I have one more year.’ We have some super underclassmen who are very good. The season was all good, all positive.”

A year ago as a junior, Kali Case made a difficult choice.

As she was looking to find her college landing spot, the softball star was scheduled for visits to schools around the country, typically on weekends.

In other words, not much time for tennis.

“I loved tennis, but I was in a tough spot because I knew I’d be missing a lot of tennis,” Case said. “I’d only partially be there for the team. I decided to take the year off.”

Case found the right fit for softball, committing to Boston College. With that decision made, she was able to return to tennis this fall, pairing with junior Bridget Danaher as a doubles team.

Case and Danaher finished fourth at the sectional, losing to Stagg’s Emly Garcia and Kamila Wolowiec 7-6, 2-6, 2-6 in the third-place match.

“It was a tough loss, but honestly, doing our part and helping the team, it meant a lot we could do that,” Case said.

Case and Danaher were singles players coming into the season but thrived together after finding their rhythm.

“We’d both played singles on JV, Kali No. 1 and me No. 2,” Danaher said. “I loved having her as a partner this year. It was great. I’m really happy with the season we’ve had. We went out and had a great time, laughing and talking. Our communication was our strong suit. We had fun and won.”

Case said they quickly found a groove early in the year.

“We were rocky the first couple games. Balls were dropping everywhere on the court,” Case said. “We weren’t sure who’d get what. Once we started communicating, things got much easier.”

As a sophomore, Leah Zemgulys just missed advancing to state.

And even though her junior season won’t feature a state appearance, she was incredibly pleased with her performance.

Advancing to the sectional semifinals would have clinched her a state berth during a normal season.

Mother McAuley (15) tied with Stagg for third place in the team standings.