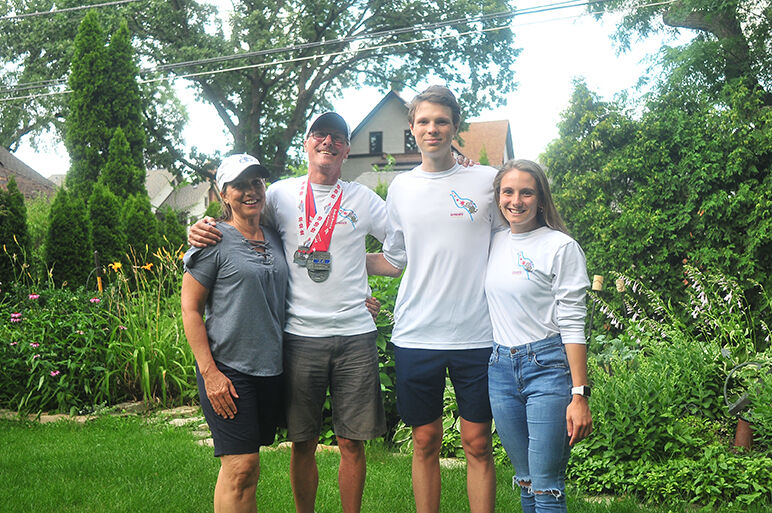 Joe Broad (second from left), a longtime Beverly resident, will compete in the 2021 Chicago Marathon on Oct. 10 with his kids, Sam and Allison, also running the 26.2-mile race. His wife, Heidi, keeps track of her family as they run by riding or running along the course. The family is raising funds for the Chicago Diabetes Project. (Review photo) 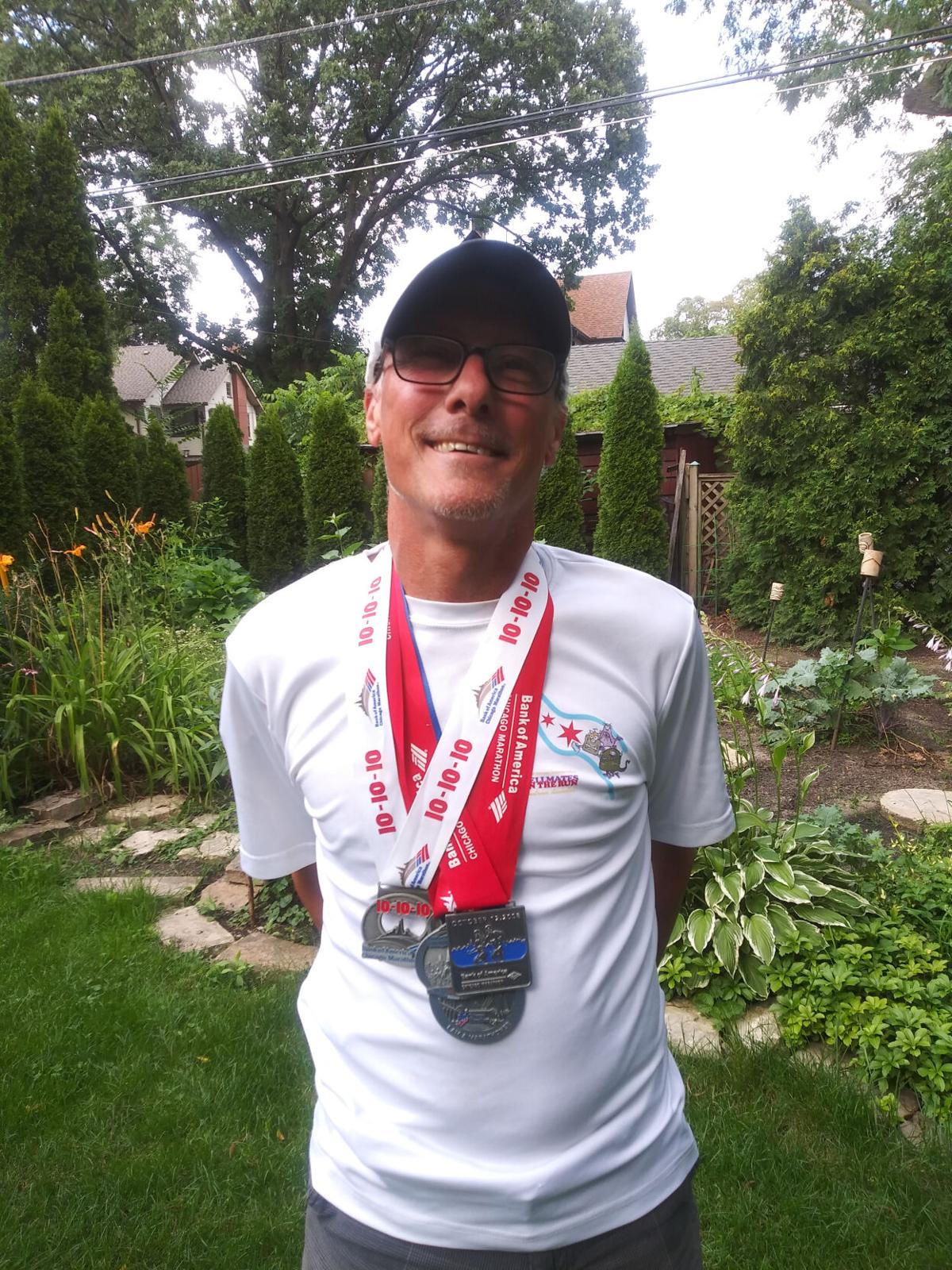 Joe Broad has run in seven Chicago marathons dating back to 2005. He was joined in 2019 by his kids, Sam and Allison. Diagnosed with colon cancer in 2020, Joe Broad continues to receive chemotherapy treatments as he trains in preparation for the 2021 marathon. (Review photo) 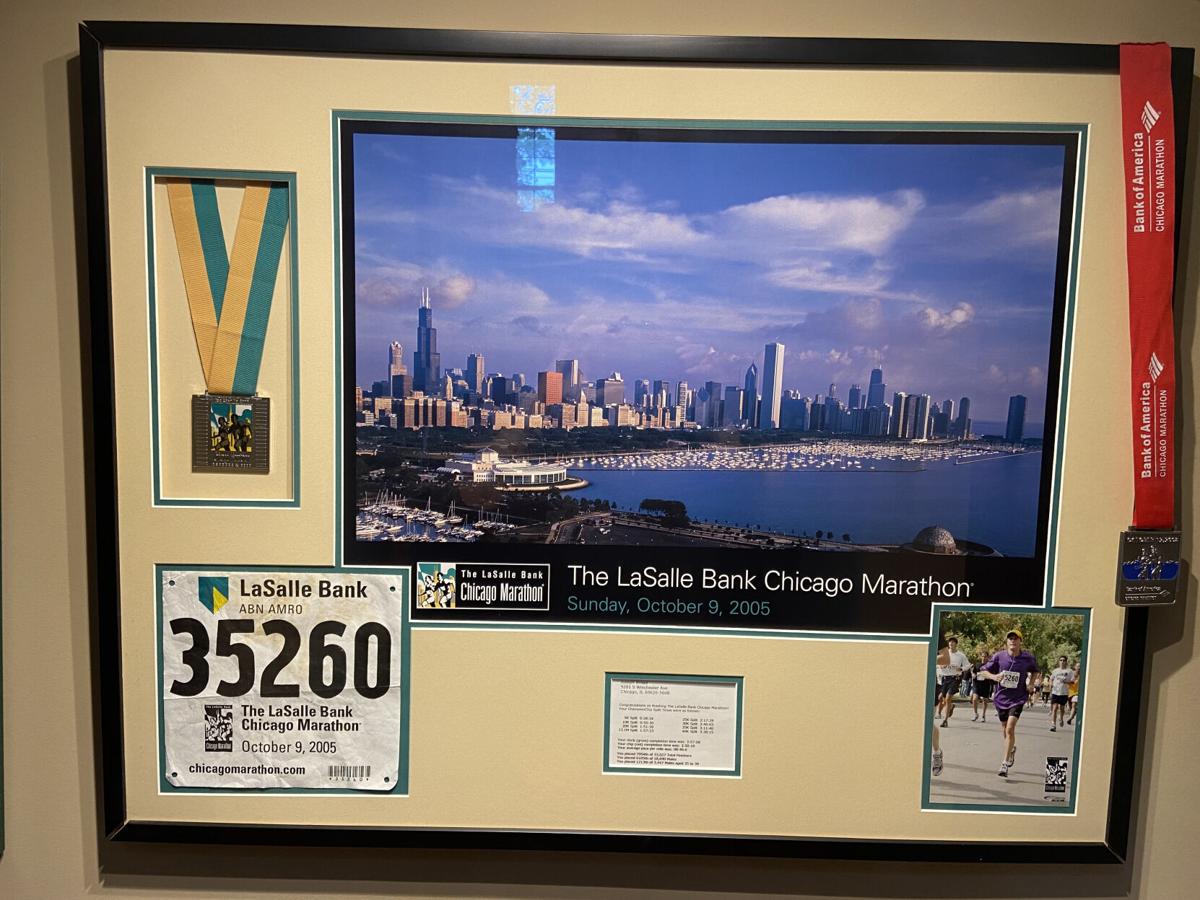 Joe Broad (second from left), a longtime Beverly resident, will compete in the 2021 Chicago Marathon on Oct. 10 with his kids, Sam and Allison, also running the 26.2-mile race. His wife, Heidi, keeps track of her family as they run by riding or running along the course. The family is raising funds for the Chicago Diabetes Project. (Review photo)

Joe Broad has run in seven Chicago marathons dating back to 2005. He was joined in 2019 by his kids, Sam and Allison. Diagnosed with colon cancer in 2020, Joe Broad continues to receive chemotherapy treatments as he trains in preparation for the 2021 marathon. (Review photo)

Joe Broad first got into running so he could enter the 2005 Chicago marathon.

He had no prior experience, but he quickly hit the road, piling up the miles while training for the 26.2-mile race.

That was just the start for Broad, a Beverly native and longtime resident, who has since run six other marathons.

However, the 2021 Chicago Marathon will be especially meaningful for Broad and his family because he and his adult children, Allison and Sam, will run to raise money for the Chicago Diabetes Project (CDP).

This year, after being diagnosed with colon cancer in August 2020, Broad will have no times to chase, no mile splits to keep track of—just a simple objective.

After his diagnosis, Broad, 55, began chemotherapy treatments in September.

Although he is still receiving treatments every other week, recent test results have been good news.

“My CAT scans are stable. It’s stable, no spread,” Broad said. “That’s the best possible thing I can hear.”

As he underwent the schedule of chemotherapy over the last year, Broad continued running whenever possible.

He praised his wife, Heidi, for being his rock throughout his cancer battle, along with the support of his kids, family and friends.

“Exercise helps with the side effects [of chemo] tremendously. It helps me stay focused,” Broad said. “Exercise helps mentally and physically. I’m doing good. Chemo sucks, but I have a great support system of family and friends. I’m taking life one day at a time, and I’m counting my blessings. I’m doing everything I can to move forward and get rid of this from my system.”

Running is a family tradition for the Broads.

Joe and Heidi were spectators at the 2004 Chicago marathon, and that’s when Joe vowed to run the event the next year. The spousal wager on that vow was $1.

Training became a weekly time of family bonding as the Broads would drive downtown early on Saturday mornings to train on the lakefront.

With Heidi, Allison and Sam on bicycles, Joe would complete extended runs along the lakefront. When Joe needed to increase the miles, Heidi and the kids would take a break for pancakes at a cafe near Burnham Harbor.

The long running tradition has been memorable for the whole family.

“Dad probably would have enjoyed them more than us. He was always the hungry one,” said Sam Broad. “That smell, though, each week, is just so good. It became a tradition. We would run together on our long runs and most of our short runs.”

Making the 2019 marathon especially memorable was that Allison and Sam joined their dad to enter the race.

After years of cheering him from the crowd, they were ready to take a run at completing the marathon.

Allison Broad, a standout gymnast at the University of Illinois-Chicago, began running as she rehabbed from a serious knee injury in college. Her brother, Sam, a swimmer and water polo player at Br. Rice High School, started distance running as a competitor in triathlons in his freshman year at Illinois State University.

Allison said she’s seen the marathon from both sides now.

“I feel very lucky that we got to see my dad run through Chicago for so many years,” she said. “We kind of knew what it would entail as a spectator, but running it on your own, that’s a whole other level. Running in your own city, though, it was incredibly special.”

As the family matriarch, Heidi, a former cross-country runner, zipped around the course on race day 2019 to keep tabs on her family of athletes.

In years past, with other family and friends waiting along the course, the Broads rode bikes, jumped in a cab or hopped on a train—just about anything to keep up with their favorite entrant making his way through one Chicago neighborhood after another.

“It’s like ‘Where’s Waldo?’ It’s chasing and a scavenger hunt,” Heidi said. “We always knew what Joe was wearing, clothing that was unusual to stand out, like a purple shirt. The second year, we all wore lime-green scarves so he could see us.”

As he ratchets up his training for the upcoming marathon, Joe has received clearance from his doctors to prepare for the grueling event.

Broad said he feels good and knows that, if all else fails, he can walk some of the distance.

The Broads will be running this year’s Chicago Marathon to raise money for the CDP, an organization dear to Joe, who was diagnosed with Type 1 diabetes when he was 7 years old.

According to the CDP, it endeavors “to make islet cell transplantation a viable treatment option for diabetes. The CDP is a global collaboration of scientists, researchers, physicians and surgeons with one mission: cure diabetes.”

John Dine, a member of the CDP Board of Directors, said the timeline is 3 to 5 years for a cure to be FDA approved and readily available for people with diabetes.

He expressed thanks for the support of people like the Broad Family and their fundraising efforts.

“We’ll have about 40 runners raising funds in the marathon,” Dine said. “It’s very meaningful and pretty incredible to see. There are 45 people already cured who are free of a life of insulin and living completely normal lives.”

As Joe Broad waits to take part in the Chicago Marathon and all its energy, camaraderie and charity, he isn’t short on motivation.

“All three of us running this year, it’s going to be great,” he said. “You take that turn onto Columbus Drive and see [the finish line]. I’m proud of my kids because they ran a marathon for themselves but also for me and the Chicago Diabetes Project. Running has been a family thing. It’s good for all of us.”

For more information about the CDP, visit the website at chicagodiabetesproject.org.