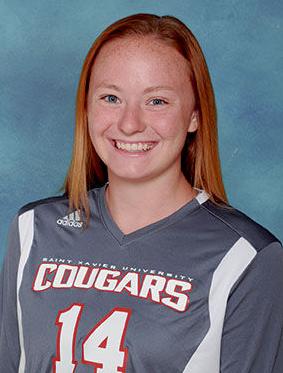 A St. John Fisher and Mother McAuley product, Courtney Joyce dished out over 1,200 assists in her freshman year for St. Xavier. She has made a seamless transition in her sophomore campaign as she balances both setting and hitting duties for the Cougars.

A St. John Fisher and Mother McAuley product, Courtney Joyce dished out over 1,200 assists in her freshman year for St. Xavier. She has made a seamless transition in her sophomore campaign as she balances both setting and hitting duties for the Cougars.

Deciding to move an established position player to a new spot on the volleyball court requires thoughtful consideration from a coach, and some players would resist such a decision.

However, St. Xavier University (SXU) Coach Bob Heersema didn’t have to worry about that when moving sophomore setter Courtney Joyce from setter to hitter.

In fact, the longtime women’s volleyball coach was confident that his returning starting setter would welcome the change.

“Courtney is a volleyball nerd. I knew she would be ready for the move,” Heersema said. “It was never a concern of mine. She is an all-around volleyball player.”

A St. John Fisher and Mother McAuley graduate, Joyce has made a name for herself as a setter. She wasn’t just any setter; she was dominant and in 2013 dished out almost 700 assists in helping lead the Mighty Macs to the Class 4A state championship.

Her success at setter continued in college during her redshirt freshman year. After transferring from Western Illinois University to SXU, Joyce made an immediate impact for the Cougars. She distributed over 1,200 assists in leading the offense as the team finished with a 21-13 record.

Her accomplishments did not go unnoticed as Joyce was named to the Chicagoland Collegiate Athletic Conference (CCAC) First Team. She also had 337 digs, 121 kills, 35 blocks and 29 service aces.

However, Joyce did not rest on her laurels, especially knowing that incoming freshman Emily Mayer (Mother McAuley) would be joining the team.

“This summer I really worked on my vertical, being able to jump and getting strength in my arms,” Joyce said. “That was the biggest transition, strengthening my legs and shoulders so I’d be able to hit. I was ready.”

Sharing setting duties with Mayer has enabled Joyce to show off her all-around game. Through 21 games, the sophomore setter has 353 assists and 157 kills while also adding 151 digs and 28 service aces.

On Sept. 13, Joyce was named the CCAC Volleyball Attacker of the Week for performances that included three matches with double-digit kills. In a four-set victory over Cornerstone University (Mich.), she powered the way to the win with 15 kills, 25 assists and 20 digs.

“It’s nice to not only get a touch on every ball but to terminate, too,” Joyce said. “I’m not used to it. I get to put a big ball down, which can be such a momentum swing. It’s different hitting, but I like it.”

Heersema said the move has helped relax his sophomore setter. Instead of focusing solely on one aspect of her game, Joyce is contributing all over the court.

“It’s a reprieve for her not to have to set 24/7,” Heersema said. “It gives her a little break by hitting instead of being so focused on the setting. Courtney has a better appreciation of the setting and the relationship to the hitter even more now.”

Joyce isn’t the only athlete on the roster with a Mighty Macs connection. Along with Mayer, other Mother McAuley graduates on the SXU roster are senior defensive specialist Erica Harris and junior Sydney McPhillips, and they are key contributors for the Cougars.

“Last year when we were recruiting Emily, I’d go to McAuley matches and just end up talking to all the coaches after the game,” Joyce said with a laugh. “Keeping that connection going is really nice.”

As the season hits the halfway point, Joyce is constantly working to improve her abilities as an all-around contributor.

With a talented SXU squad, the sky is the limit for the setter-turned-hitter and her teammates.

“This year, we can do a lot of great things. We can make it to nationals,” Joyce said. “I fully expect to make nationals. We’re struggling with injuries now; so we’re working through that, but it will only make us better as a team. I think the season is only going to get better.”