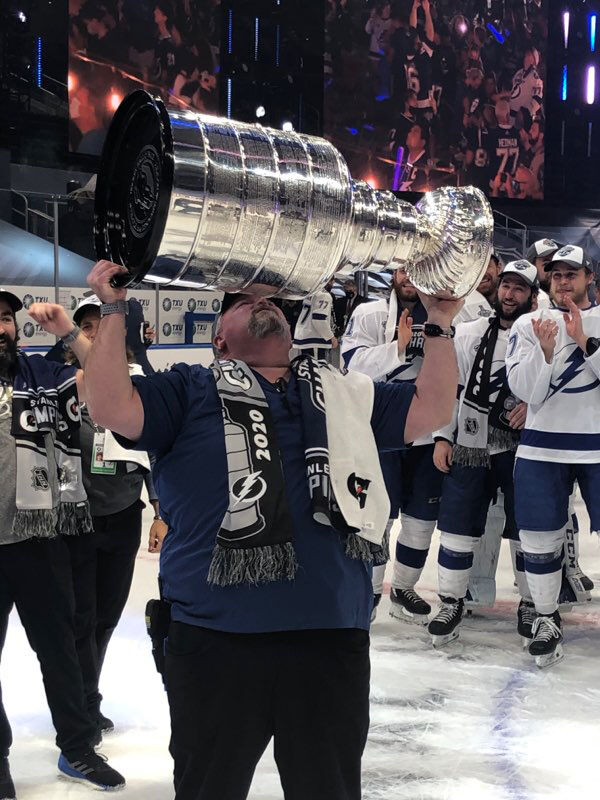 Rob Kennedy, a St. Rita High School grad, celebrates with the Stanley Cup after the Tampa Bay Lightning defeated the Dallas Stars in a six-game series. Kennedy is an assistant equipment manager for the Lightning. 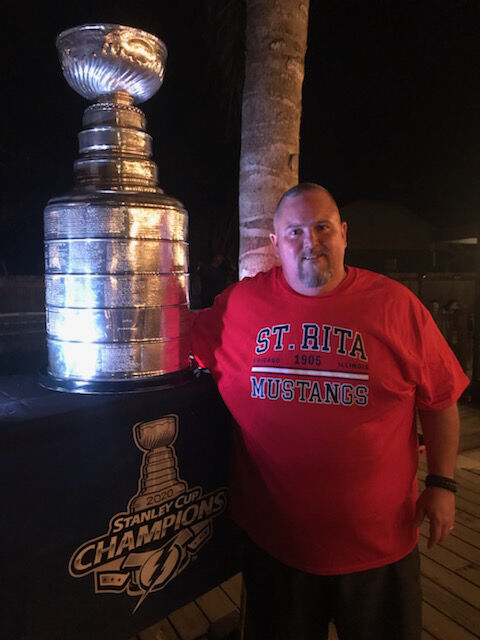 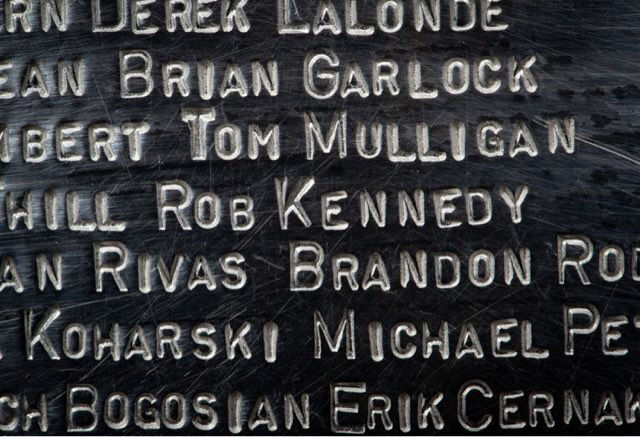 Rob Kennedy’s name appears on the Stanley Cup. Kennedy said his name will remain on the Cup until 2083. 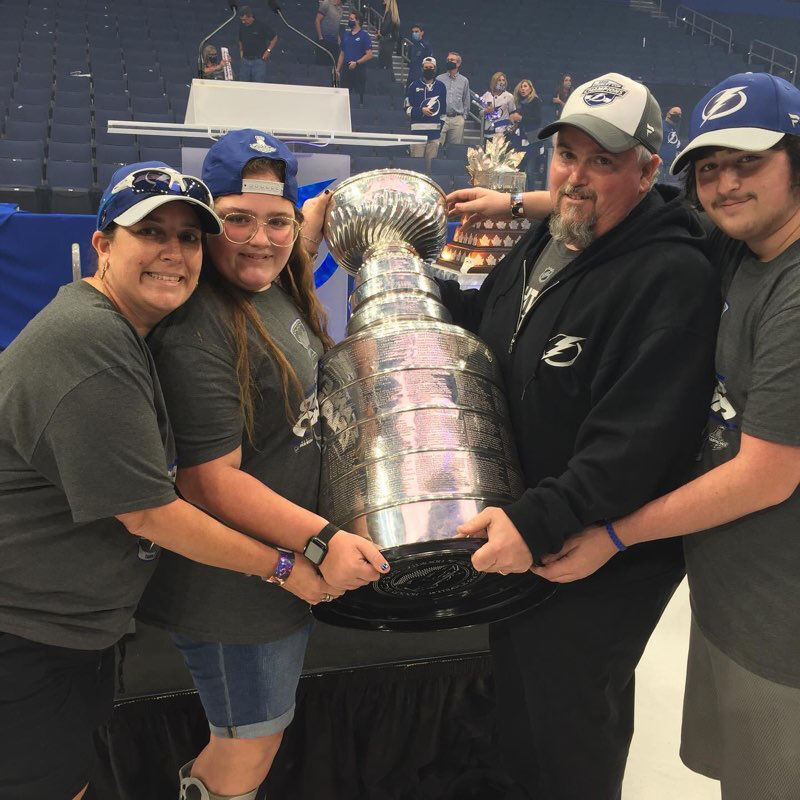 Kennedy, a St. Rita alumnus and assistant equipment manager for the Tampa Bay Lightning, celebrates with the Stanley Cup with his wife, Heather, his daughter, Allison, and his son, Quinn. (photos courtesy of Rob Kennedy)

Rob Kennedy, a St. Rita High School grad, celebrates with the Stanley Cup after the Tampa Bay Lightning defeated the Dallas Stars in a six-game series. Kennedy is an assistant equipment manager for the Lightning.

Rob Kennedy’s name appears on the Stanley Cup. Kennedy said his name will remain on the Cup until 2083.

Kennedy, a St. Rita alumnus and assistant equipment manager for the Tampa Bay Lightning, celebrates with the Stanley Cup with his wife, Heather, his daughter, Allison, and his son, Quinn. (photos courtesy of Rob Kennedy)

After a busy day around Tampa Bay, Rob Kennedy finally got a chance to sit down at home on Nov. 20 and hang out with his family and close friends by the pool.

In addition, while enjoying his backyard, Kennedy and friends also admired something else that shimmered under a bright spotlight: the Stanley Cup.

Kennedy, a St. Rita High School alumnus (1991) and a longtime assistant equipment manager with the Stanley Cup champion Tampa Bay Lightning, just took it all in.

“I’ve been using this term a lot, but it was surreal, pretty surreal,” Kennedy said. “I was able to take a moment, step back and just look at the Stanley Cup. We had put some spotlights up on it, and it was a perfect place for the Cup. There’s no way to describe it. It looked absolutely amazing.”

The Stanley Cup, the championship trophy of the National Hockey League (NHL), annually goes on a victory tour in the months following the championship series. The tradition started in the mid-1990s that players, coaches and staff from the winning team each get a private day with the iconic trophy.

For Kennedy, that day came on Nov. 20 as he was able to make several stops around Tampa Bay, including a favorite bar, Beer Shed, where patrons were able to take some safe, socially-distanced photos.

Friends and family were able to schedule designated time slots to see the trophy and take some quick photos.

“Everybody had to temperature checks and wear facemasks. Then for pictures, you could take off the masks,” Kennedy said. “We mapped out an itinerary for the day planned almost to the minute. I was really nervous, but everything was super laid back. It was just a good, fun day.”

Growing up in the West Lawn/Midway area, Kennedy started off in hockey working as a manager with the University of Illinois-Chicago hockey program.

The Flames’ hockey program was discontinued after the 1995-96 season.

He went on to work for a skate shop in Orland Park before catching on with the Chicago Wolves. After that, Kennedy kept climbing the ranks, working for the Muskegon Fury, the American Hockey League’s Cleveland Barons and then the Lightning.

“I remember thinking as a 14-year-old kid, ‘I’ll win the Stanley Cup as a player,’” Kennedy said. “The chances of making it as an elite athlete are so small. I found a way to get there though. You try to prove yourself every day and put your best foot forward.”

As an assistant equipment manager for the Lightning, Kennedy and the team staff are responsible for all the little things that make a team go.

He helps sharpen skates, repairs equipment and works with the team’s practice and game uniforms.

“Our goal is to take away all of the excuses [for a loss],” Kennedy said. “We don’t want anything from inside the locker room impacting the game in a negative way, so we take a lot of pride in what we do.”

Kennedy especially takes pride in his attention to tiny details.

“On the HD video board [at a game], I saw a loose white thread on a blue jersey on a graphic on the big screen. It drove me crazy,” Kennedy said with a laugh. “Maybe nobody noticed, but I noticed it. The guys on the team always know where to find me if they need anything.”

The 2019-20 season proved to be incredibly unique for the Lightning and all the teams around the NHL.

The end of the regular season was delayed this spring due to the COVID-19 pandemic. The season was completed late this summer and into the fall in bubble cities in Toronto and Edmonton as the Stanley Cup playoffs played out.

The Lightning started off the playoffs in Toronto before finishing out the Stanley Cup run in Edmonton, including a 4-2 series win over Dallas in the finals.

The bubble environment provided some unique challenges in an already weird season, especially as Kennedy dealt with health issues in his family that almost required him to leave the bubble.

“It was a lot of different responsibilities,” Kennedy said. “Usually we’ve got other people who can jump in and help out. We only had the three of us, the equipment guys, with no backups. Thankfully, everything went well.”

Kennedy made the most of the opportunity throughout as the Lightning banded together as a franchise, not just players and staff staying separate.

“There were some tough days, some low points, but it was way more cooler than anything else,” Kennedy said. “We got to spend so much time with the team staff and the players, even if it was just watching a college football game.”

The highlight came the morning after the Stanley Cup-clinching win. Hanging out with several players and staff in the early-morning hours, a player received a FaceTime call to congratulate him on the accomplishment.

“It’s Wayne Gretzky, the greatest player of all-time,” Kennedy said. “There’s six or seven of us sitting there, and Gretzky calls to congratulate us. Greatest player, greatest trophy, that was surreal. I was lucky to be in the room.”

The NHL is expected to start the new season in early January but no date has been set.

However, whenever that happens, Kennedy and the Lightning staff will be ready.

“We’ll be ready to go full bore,” Kennedy said. “We pride ourselves that the players’ day starts with us. We want to start things off with a positive mood. If I don’t enjoy what I’m doing, why am I doing it? I love it.”