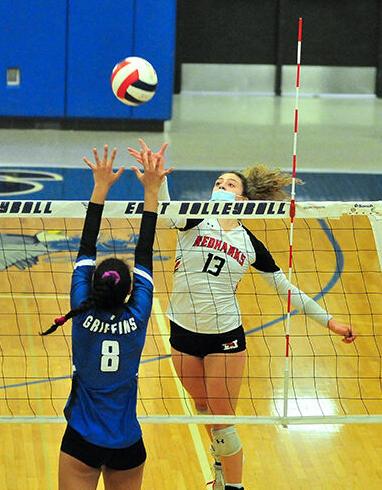 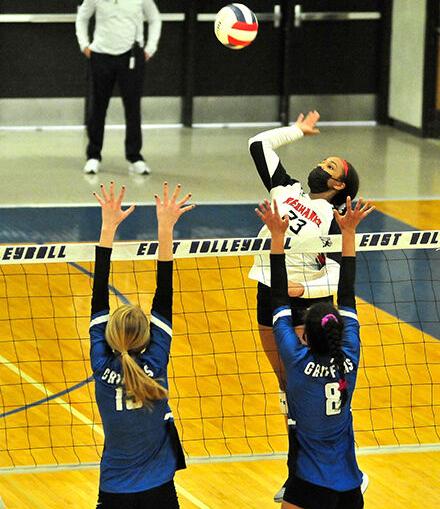 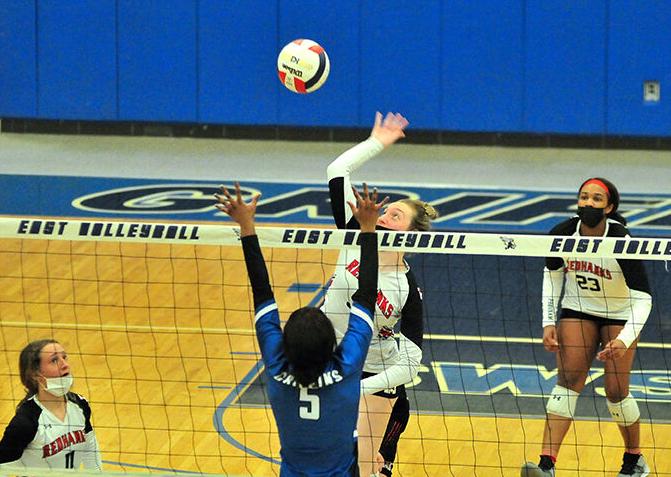 Closing out the short spring season, the Marist girls volleyball team ran the gauntlet in the final stretch.

The RedHawks faced four of the best teams in the state in four straight days: Marian Catholic, Sandburg, Benet and Lincoln-Way East.

Having missed several weeks of the season resulting from a pause due to COVID-19, Marist vowed to appreciate the stretch, win or lose.

“When we came back, [Coach Jordan Vidovic] said to ‘play angry,’” said senior Jillian Elsouso. “We all took that and ran with it. We wanted to leave it all on the floor. With that pause, we were super-happy to get on the court. We saw first hand how fast it can be taken away from us.”

The RedHawks were without half their starting lineup due to club commitments.

With a youth-dominated starting lineup, Elsouso was the only senior, but Brusek and her teammates went to work against a strong Griffins squad.

“I’m proud of how we played. It’s kind of a preview of next year,” Brusek said. “We had to play Marist volleyball. We fell short overall, but we played really well despite not having all our starters.”

Marist won the opening set with big contributions from Chaney and Conrad.

Chaney, a 6’1” sophomore outside hitter, ripped 2 kills late in the set, and Conrad served up the win with 2 consecutive service aces.

As a freshman, Chaney was a late-season call-up to the varsity where she helped the RedHawks win the Class 4A third-place trophy.

She took a huge step in her sophomore season as Marist’s go-to hitter.

However, in looking ahead to a junior season that’s right around the corner this fall, Chaney said she can still improve in many ways.

“I’m happy with how I played. I worked my butt off for this,” she said. “I’m happy with the results, but there are always improvements you can make, from note-taking, scouting myself, just anything. I have a lot of work to do.”

Chaney hopes the upcoming 2021-22 athletic seasons are more normal after the pandemic wreaked havoc during 2020-21.

“As a team, I would say our connection has to keep developing,” she said. “We haven’t been able to do that because of COVID. We’re excited to get right back to it and starting again. We know what we can work on as a team and individually.”

After losing a close second set, Marist struggled midway through the third, and LWE pulled away.

“We lost our focus. We talked about reigning it in and keeping our foot on the gas throughout the whole game,” Brusek said. “It got lost in the mix in some super-long rallies.”

Elsouso, a 5’10” senior outside hitter and skilled defensive player, will continue her academic/athletic career at Lewis University.

As she closed out her high school career, Elsouso was happy for the chance to compete. The RedHawks beat Marian Catholic in the East Suburban Catholic Conference semifinals, exacting revenge for a loss earlier in the season.

Marist lost a 3-set thriller to Benet on April 21 in the championship.

“The second we got back from the pause, especially the Marian match, we thought, ‘This is our rematch,’” Elsouso said. “This last stretch was tough, but it’s definitely something we can handle. It was a great learning experience for us as seniors, but definitely the underclassmen, too.”

Looking for 2- to 3-person office