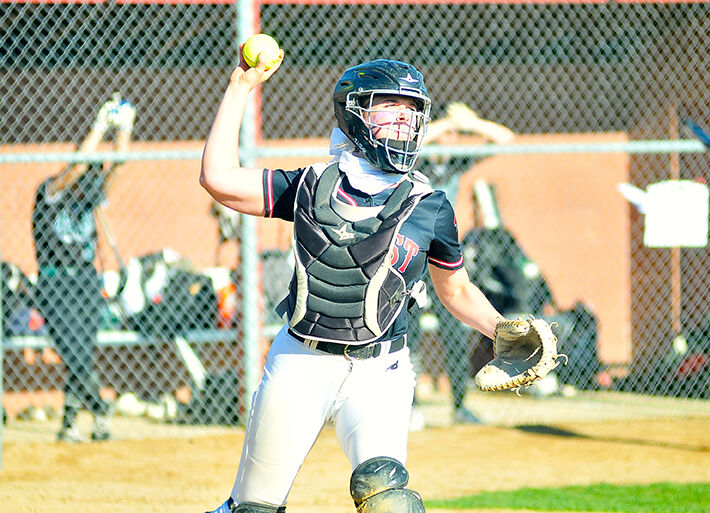 Marist junior catcher Emily Bojan fires to first after an Abby Dunning strikeout against Bishop McNamara. Bojan has been a force at the dish and behind the plate for an undefeated RedHawks squad. (Review photo) 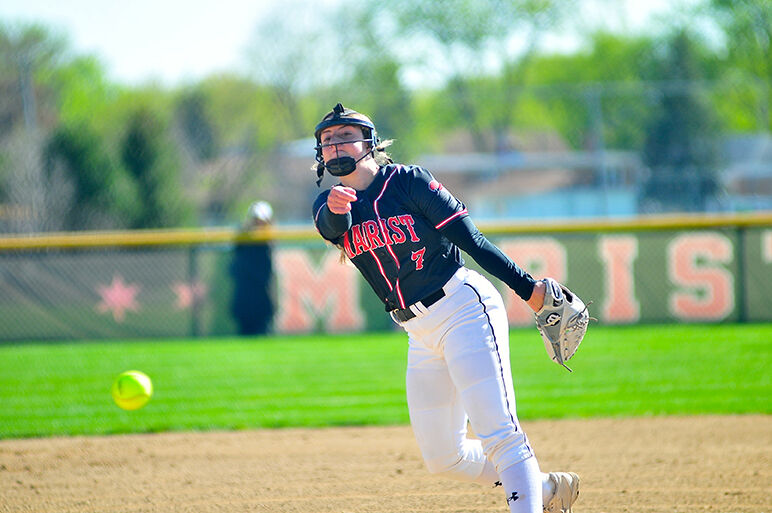 Marist senior Abby Dunning threw a no-hitter with 15 strikeouts against Bishop McNamara with only 2 runners reaching base, one via a walk and the other via an error. (Review photo) 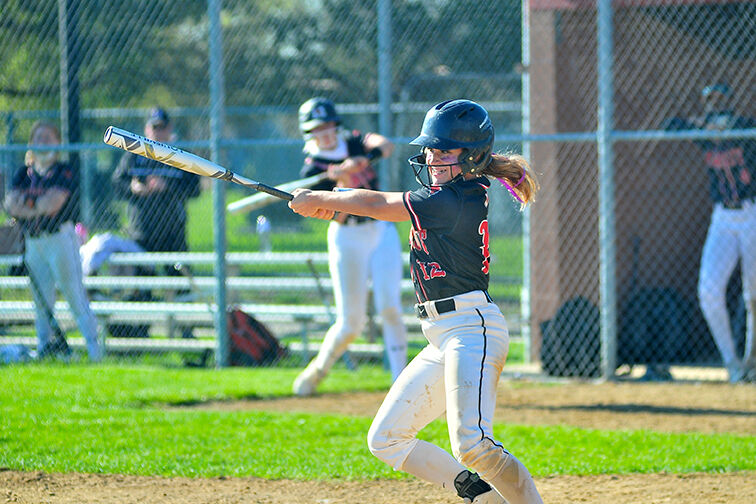 Marist senior shortstop Easton Lotus prepares to take off down the line in the third inning. Lotus ripped 2 hits and scored a run against Bishop McNamara. (Review photo)

Marist junior catcher Emily Bojan fires to first after an Abby Dunning strikeout against Bishop McNamara. Bojan has been a force at the dish and behind the plate for an undefeated RedHawks squad. (Review photo)

Marist senior Abby Dunning threw a no-hitter with 15 strikeouts against Bishop McNamara with only 2 runners reaching base, one via a walk and the other via an error. (Review photo)

Marist senior shortstop Easton Lotus prepares to take off down the line in the third inning. Lotus ripped 2 hits and scored a run against Bishop McNamara. (Review photo)

Whenever she returned to the field after the pandemic, Marist junior Emily Bojan vowed to be ready.

She made the varsity team a year ago as a sophomore only to see the season canceled, but she wasn’t content with just making the team.

Bojan hit the weights to help improve her bat speed and power. She worked on all the catching basics from framing to blocking pitches. She did tee work, focused on swing mechanics and took live pitching when she could.

Now, all that hard work is paying off.

Bojan has been Marist’s starting catcher and No. 3 hitter for a RedHawks squad with a perfect 16-0 record heading into this week’s action.

“I knew I had to work hard to earn my spot and that it wouldn’t be easy,” Bojan said. “This team is full of talent. I worked hard just to make my game better. I’m trying to be my best and play with confidence. I’m giving it my all.”

Bojan drew a walk and scored a run on April 30 as host Marist defeated Bishop McNamara 10-0 in five innings in a nonconference matchup.

Senior Abby Dunning was a monster in the circle, throwing a no-hitter with a walk and 15 strikeouts.

In earning a starting spot for the RedHawks, Bojan knew her batting skills would be key and that getting on the same page with Dunning was essential.

“I’ve been friends with Abby for a couple years now, inside the softball world and out,” Bojan said. “We’ve become close, and how good she is, that pushes me to be the best I can be. She always pushes me, and I’ve gotten to know her pitches. Working with her is awesome.”

Against Mac, Marist scored 6 runs in the first with junior Sierra Sass (2 runs) and sophomores Eileen Donahue and Isabel Cunnea knocking in a run each. That was all the offense Dunning needed as she went to work on a dominant performance.

The Boston College recruit struck out the first 7 batters she faced before allowing the walk. The only ball that was put in play came from an error in the outfield in the fourth, and all 15 outs came from strikeouts.

The impressive day in the circle came a day after Dunning struggled a bit with her control in a win over Marian Catholic.

“Yesterday wasn’t my best day. I knew I’d come out here, trust my stuff and pitch with confidence,” Dunning said. “I felt good. I know I have a phenomenal defense behind me. I have a lot of confidence in this team. The support really helps me.”

Dunning pitched around the error with a strikeout to end the fourth before setting the Fighting Irish down in order in the fifth to complete the no-no.

A four-year varsity player, Dunning split time in the circle as a freshman and sophomore with Angela Zedak, now starring at Northwestern.

Dunning would have been Marist’s ace last year as a junior.

“You don’t take any game for granted. We learned last year how fast it can be taken away,” Dunning said. “You make the most of it this season.”

Against Bishop McNamara, seniors Kali Case and Easton Lotus had 2 hits and a run apiece. Junior Kaitlyn Wright and sophomore Maia Pietrzak knocked in a run each.

Junior Gianna Richy, sophomore Morgan Rogers and senior Maggie O’Brien scored a run apiece for the RedHawks who added 2 runs in the third and fourth.

In 16 games, Marist has posted 13 shutouts and only given up a combined 12 runs.

Marist Coach Colleen Phelan has been impressed by her team’s depth.

“This is a really special team. I feel like there are no egos on this team,” Phelan said. “They really love each other. That’s what we’re rolling with right now. We have the speed, power, pitching and defense. They’re playing for each other, which is super fun.”