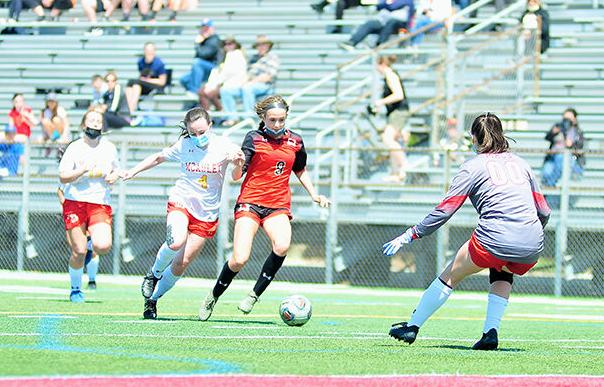 Marist senior forward Cecilia Light makes a charge at the Mother McAuley net late in the first half. Light scored a goal minutes later, her 11th of the season. (Review photo) 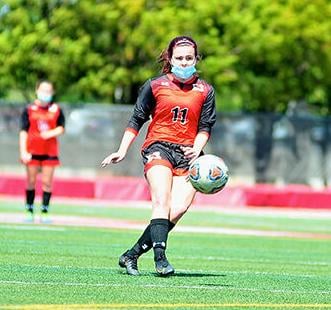 Marist senior midfielder Ciara Bridges blasts a free kick that opened the scoring 10 minutes into the first half. Bridges is a four-year varsity starter. (Review photo) 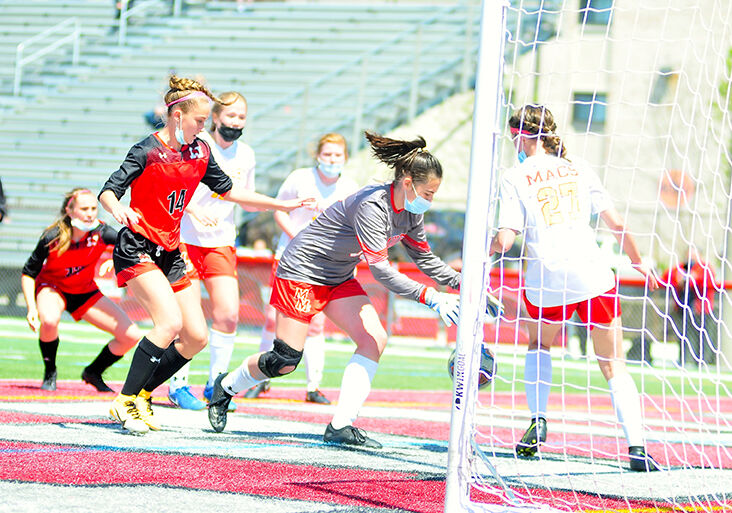 Mother McAuley sophomore goalkeeper Ella Martin makes a save on a Marist shot in the first half. Starting for the first time at goalie, Martin finished with 9 saves. (Review photo) 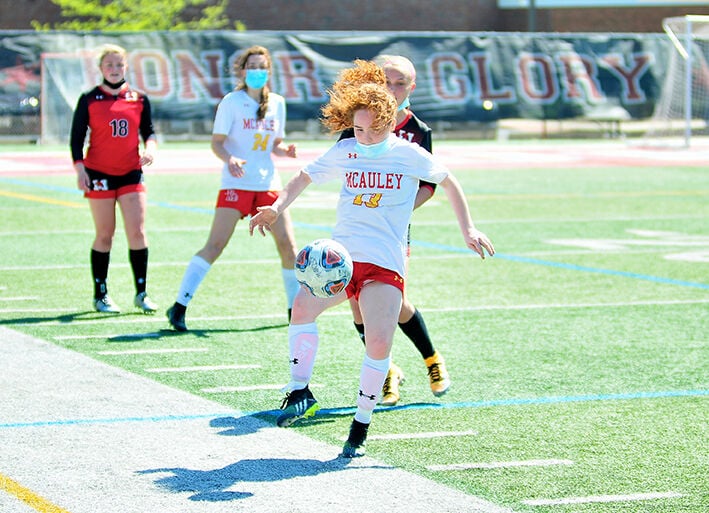 Marist senior forward Cecilia Light makes a charge at the Mother McAuley net late in the first half. Light scored a goal minutes later, her 11th of the season. (Review photo)

Marist senior midfielder Ciara Bridges blasts a free kick that opened the scoring 10 minutes into the first half. Bridges is a four-year varsity starter. (Review photo)

Mother McAuley sophomore goalkeeper Ella Martin makes a save on a Marist shot in the first half. Starting for the first time at goalie, Martin finished with 9 saves. (Review photo)

Marist senior forward Cecilia Light has been a scoring threat for the RedHawks since she first made the varsity team as a freshman.

As a sophomore, she led the team with 13 goals.

But, in the early weeks of the spring season, Light has taken her game to a whole new level in scoring 11 goals in 6 games.

Light scored a goal, and senior Ciara Bridges and sophomore Madeline Meehan scored one each on May 1 as host Marist defeated Mother McAuley 3-0 on a beautiful sunny day in a nonconference rivalry game.

“Just wanting it, just wanting [success] more, it is really big this year,” Light said. “I couldn’t do it without Ciara. She’s probably got an assist on 75 percent of them. She’s been setting me up.”

Marist improved to 4-3 with the win. The RedHawks hosted St. Laurence on May 3, after press time.

Juniors Rayne Ann Cave (2 saves) and Mary Englehart (save) and senior Kayla Fox combined in goal for the shutout.

Voted team captain for her senior season, Light has been a force. She scored all 4 goals in a disappointing 5-4 loss on April 29 at state power Wheaton Academy.

According to Light, the usual senior sense of urgency has kicked into high gear. Light and Bridges are four-year varsity players on a young RedHawks roster.

“I feel like we, especially me and Ciara, we know this is our last season here,” Light said. “We want to make the most of it. I didn’t really think we’d have a season, so to be out here is a lot of fun. We’re trying to make the most out of it.”

Taking the field for the annual rivalry showdown with the Mighty Macs, Bridges and Light scored in the first half for Marist.

Bridges scored on a straight-on free kick 10-plus minutes into the game from about 25 yards out. Kicking into a strong wind, the senior midfielder was trying to curve the ball into the net, but with the conditions, the ball seemingly had a mind of its own.

Nonetheless, it hit the net high inside the right post for the score.

“I joke with [Marist Coach Chris Roe] that I can’t always control my free kicks,” Bridges said with a laugh. “Either I’m on, or I’m off. Today I was on. I was feeling it today. I was trying to curve it in more, but it worked anyway.”

Marist had several other first-half chances before Light notched another goal in the closing minutes. Fielding a long pass from junior Kayla O’Brien up the left side, Light cut inside toward the goal, spun and fired an angled shot from 20 yards out.

“I was going to kick it with my left, but I went with my right,” Light said. “I touched it behind, shot it, and it went in.”

Meehan scored halfway through the second half on a slow-developing throw-in. Finding a gap in the defense, the sophomore got just enough on the ball for the goal.

Bridges and Light will both attend Spring Hill College, a Division II program in Mobile, Ala., to continue their academic-athletic careers.

In the meantime, the duo will keep leading a talented, young Marist squad.

“We’ve played together the last four years. We know each other’s runs and our timing, so it just works,” Bridges said. “It’s our senior year, our last chance to work for the goals we’ve set since we started here. It all means a lot, especially McAuley games.”

“Our conference is no joke,” Roe said. “We’re not afraid of anybody. We’re going to come with it. The way the girls have been progressing, we’ve moved players to different positions and tried different attacks and defenses. They’re picking it up. It makes a huge difference when you can plan like that and adjust to better teams.”

Mother McAuley dropped to 1-2 with the loss.

The Mighty Macs took a COVID pause in recent weeks but have worked to make up for lost time since returning to the field.

With so much young talent on the roster, McAuley Coach Jenna Ryan wants to see continued development from her athletes.

“We have a lot of potential. We only had two seniors and two juniors today, so we’re very young,” Ryan said. “But, our freshmen and sophomores belong. We’re excited about the team we have. We have a lot of speed, but it’s more working as a unit that we need to start doing more. That will come with time.”

Sophomore Gabriella Martin made her first career start in net and more than held her own by limiting a strong Marist offense. Martin finished with 9 saves, 5 in the first half and 4 in the second half.