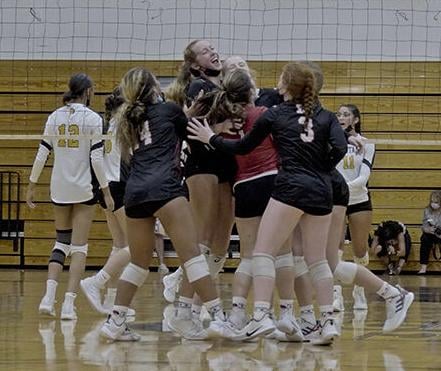 Marist freshman outside hitter Bella Bullington (center) celebrates with her teammates after a key point late in the third set against Marian Catholic. Bullington finished with 8 kills and 2 blocks for the RedHawks. (Review photo) 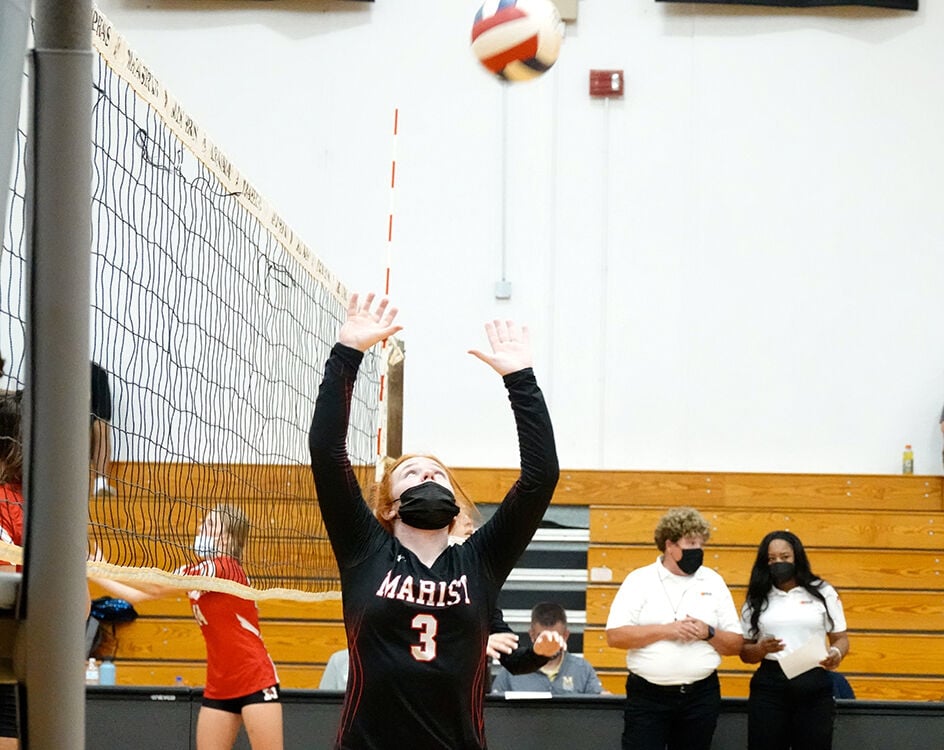 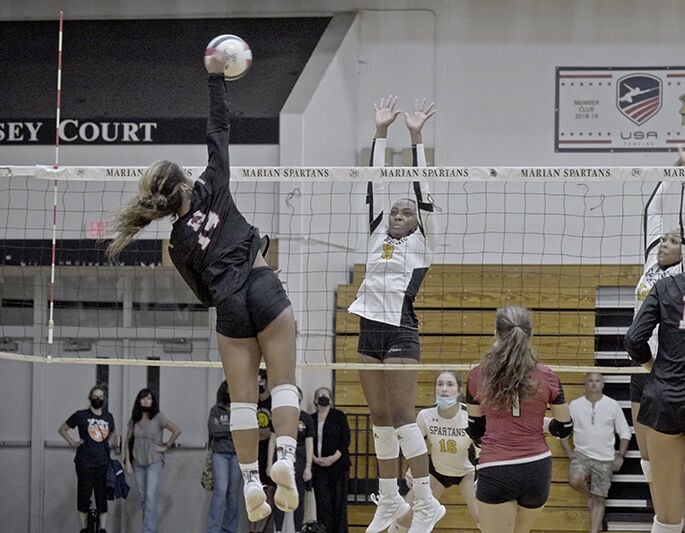 Marian Catholic senior Erica Sledge goes up for a block in the second set. Sledge totaled 22 assists and 5 digs for the Spartans against Marist. (Review photo)

Marist freshman outside hitter Bella Bullington (center) celebrates with her teammates after a key point late in the third set against Marian Catholic. Bullington finished with 8 kills and 2 blocks for the RedHawks. (Review photo)

Marian Catholic senior Erica Sledge goes up for a block in the second set. Sledge totaled 22 assists and 5 digs for the Spartans against Marist. (Review photo)

Just three years ago, Mary Clare “MC” Brusek was a freshman playing up on the Marist varsity volleyball team and trying to carve out a role for herself.

She succeeded, making her way into the rotation by her sophomore year and never looking back.

Now, Brusek is a go-to senior for the RedHawks in a lineup featuring an abundance of freshmen playing up on the varsity.

Brusek and the freshmen starred on Sept. 7 as Marist defeated host Marian Catholic in an exciting 19-25, 25-19, 25-22 win in both teams’ East Suburban Catholic Conference opener.

“It’s super-fun to see the freshmen [playing],” Brusek said. “I don’t think of them as freshmen. We’re all one team, and everyone can step up when they need to. I feel like we’re coming together as a team, especially through this tough part of the season.”

Brusek (Queen of Martyrs) finished with 13 kills and 4 blocks.

After a dominant second set, Marist found itself in a 16-14 hole midway through the third against a hot-hitting Marian squad.

The RedHawks responded with their own heavy-hitting lineup.

Bullington and junior Emilia Batus started off with a huge block; Bullington added an ace; and Lawson smashed a kill of her own.

In providing the final touches on the win, Brusek added 2 kills; Lawson and Ward had a kill each; and Bullington blasted 2 huge kills as Marist won the set 25-22.

Bullington, a 6’1” outside hitter, was thrilled to find out she made the varsity as a freshman. Now she and her teammates are working to show they belong.

“I was a little nervous coming into the season, but the seniors and everyone on the team has been really great about making sure we feel welcome and not just ‘the little freshmen,’” Bullington said. “Our team has really bonded really well. We’ve become a good group.”

Helping keep the attack as balanced as possible has been Berry and Conrad who run a 6-2 offense for the RedHawks.

After missing out her eighth-grade season to the pandemic, Berry (Most Holy Redeemer) has settled in quickly at the varsity level.

“I knew I had a shot to make varsity, but I was in total shock [to make it],” Berry said. “We’re all super-excited to be up and playing with the varsity in our first season. I’m setting everyone. I tell them to give me feedback on how my sets were. I adjust to all the hitters after that.”

The 3-set win lifted Marist’s record to 6-3 through the first two weeks of the season.

The RedHawks have been without star junior Kamryn Chaney since the start of the season as she recovers following a foot injury. Marist Coach Jordan Vidovic said she is expected back soon.

However, without Chaney, Marist has picked up some valuable experience against some top teams.

“We’ve played four non-tournament matches, and every single one has been high level of competition,” Vidovic said. “Every match has been close, runs on both sides with us having to come back. Great crowds, high energy and high intensity, the girls have had to go full blast every game. No cupcake games, you’re tested each match.”

Playing without Chaney, Brusek has embraced an even bigger role for Marist. The Western Michigan University recruit welcomes the opportunity to lead the way.

“Yeah, give me the ball,” Brusek said with a laugh. “We have such good hitters. Everyone can hit. We have to work on reining in our focus, terminating the ball and not letting teams go on those big runs.”