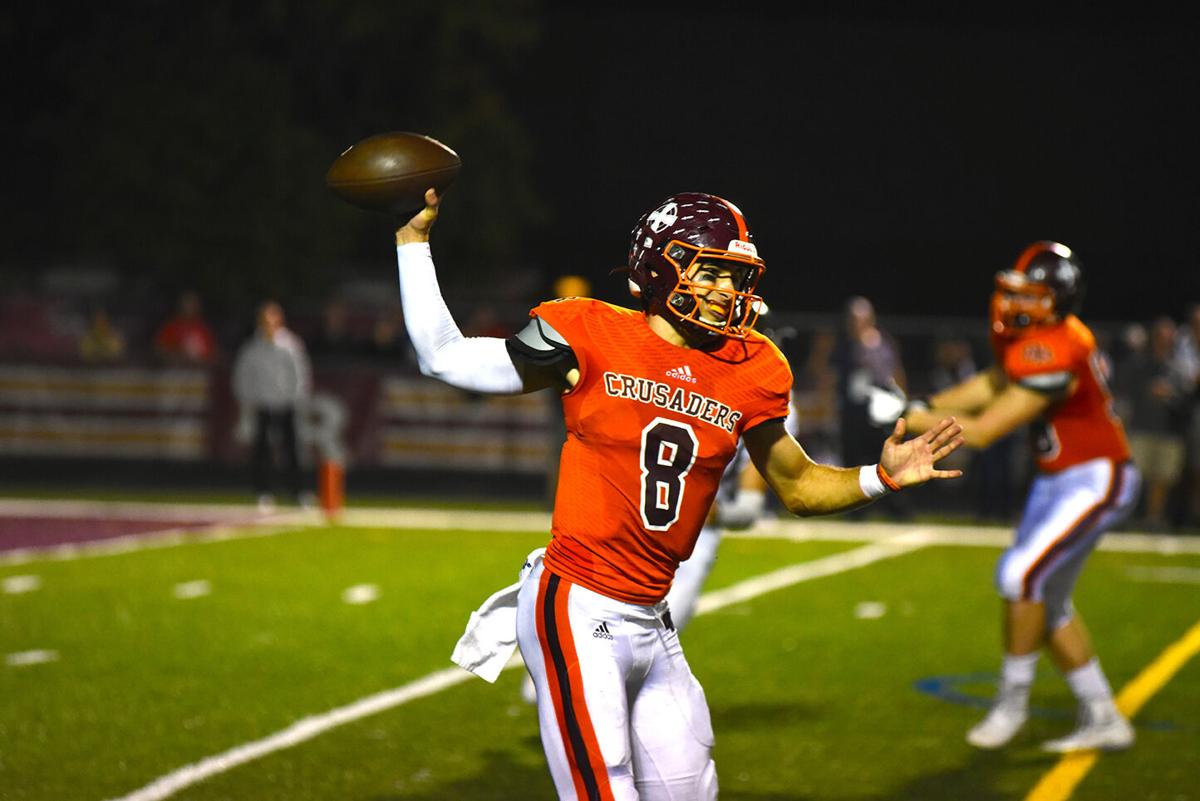 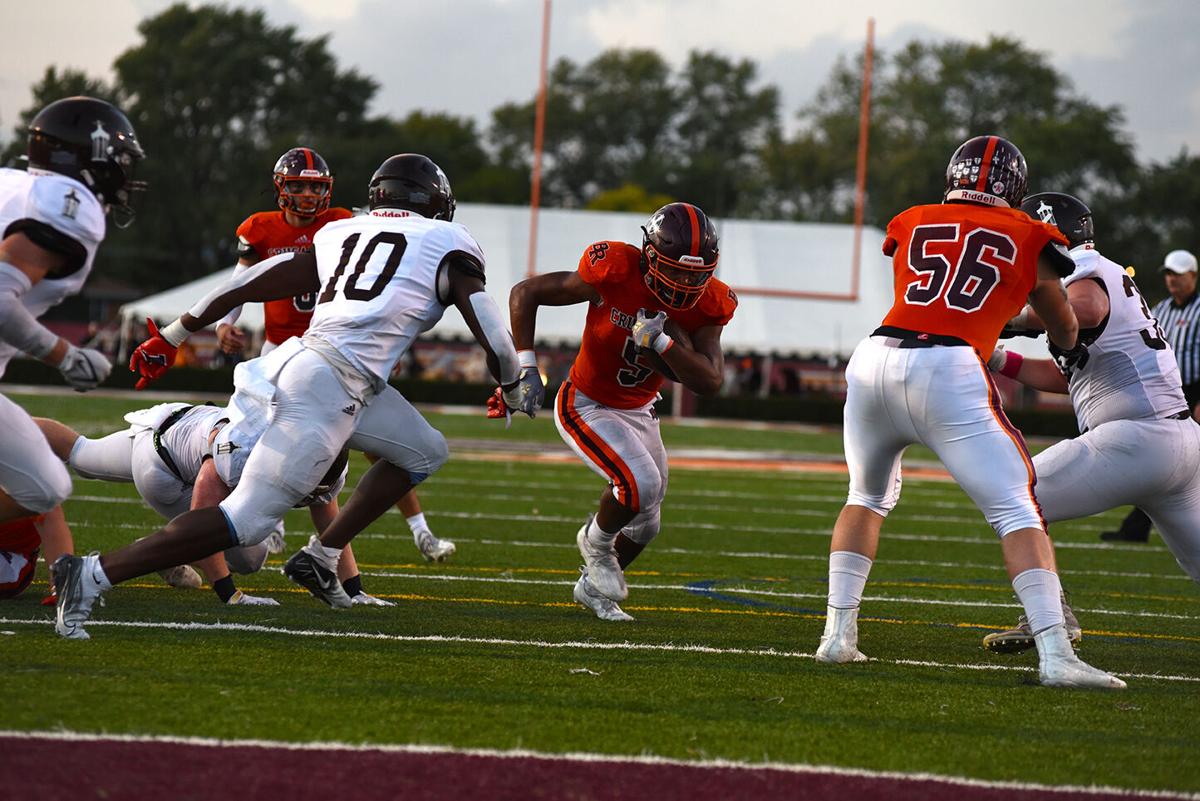 Br. Rice senior running back Aaron Vaughn bursts through the line on a run in the first quarter. Vaughn rushed for 135 yards and 3 touchdowns against Joliet Catholic. (Review photo) 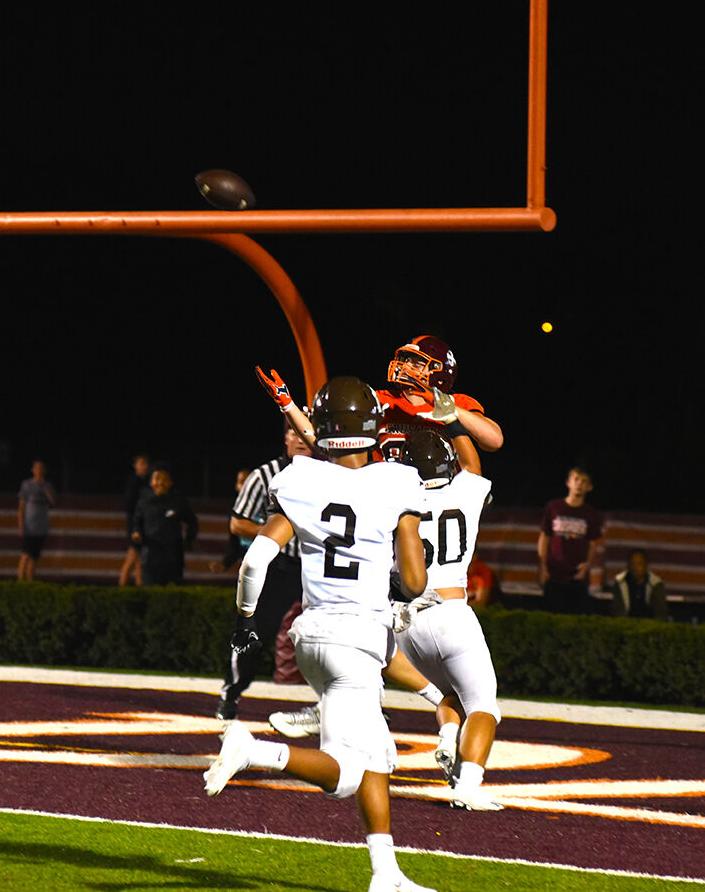 Br. Rice senior running back Aaron Vaughn bursts through the line on a run in the first quarter. Vaughn rushed for 135 yards and 3 touchdowns against Joliet Catholic. (Review photo)

Through the first half, the showdown between host Br. Rice and Joliet Catholic Academy (JCA) resembled a track meet more than it did a football game.

The two teams combined for 10 first-half touchdowns on their way to a 35-35 tie at halftime.

But in the second half, JCA kept rolling, and the Crusaders struggled on offense.

Behind a huge day with 694 yards of total offense, JCA claimed an impressive 56-49 road win on Oct. 8 over Br. Rice in a Chicago Catholic League/East Suburban Catholic Conference crossover game.

“We didn’t execute in the second half,” said Br. Rice quarterback Jack Lausch. “We didn’t play well. We’re playing some great offense against good defenders. The win is the most important thing. That’s something we’ll fix and be ready come playoff time.”

Lausch (St. Barnabas) had an impressive day for the Crusaders with 405 passing yards, 3 touchdowns, an interception and 66 rushing yards and a TD. Senior running back Aaron Vaughn finished with 15 carries for 135 yards and 3 TD.

Br. Rice had multiple answers, including two Lausch to Henry Boyer touchdown passes, but the Hilltoppers responded with their own TD. In the closing minutes and down a score, the Crusaders could not recover an onside kick, and JCA ran out the clock.

“These are the kind of games you live for,” Boyer said. “I have more fun competing in a game like this rather than blowing someone out. It shows what you’re made of. We need to fix some things up. Every loss molds us into the team we need to be in the playoffs.”

Boyer, a 6’7” senior tight end, is a University of Illinois recruit. He finished with 6 catches for 93 yards and 2 TD.

On Boyer’s second TD reception, Lausch scrambled out of the pocket and fired a high pass into the end zone. Boyer went up and pulled it in for the 31-yard score. However, JCA recovered the following onside kick.

“When Jack gets out of the pocket, we all scramble and figure it out,” Boyer said. “A lot of our big plays throughout the season have been him running around and us reacting off of that.”

Vaughn, a 5’10” senior running back, transferred to Br. Rice from Providence Catholic. He has been a reliable weapon out of the backfield all season.

“It’s just getting used to a new offense and a new system,” Vaughn said. “We have a great offensive line, a skilled offense and a good QB and running game. We know that as an offense we can put up 40 every week.”

Vaughn scored all 3 of his touchdowns in the first half.

He said the Crusaders will have to put together a full 48-minute effort in the future.

“We’ve got to come out with a better mentality next time,” Vaughn said. “We’ve got to be better with turnovers and come out and play better. We’ll be back Week 8 and 9 and into the playoffs.”

While the Br. Rice offense did its best to keep up in the football game turned track meet, the defense struggled in handling JCA.

Known for their ground game, the Hilltoppers finished with 67 carries for 596 rushing yards and 6 touchdowns.

“It’s disappointing. We didn’t do a good job preparing the kids. We didn’t give them the best chance to win,” said Br. Rice Coach Brian Badke. “The kids played their hearts out. I’m very proud of them. We must do better, and I promise you, we will.”

Br. Rice returns to action Week 8 against Marian Catholic and then travels to rival Marist in Week 9 to wrap up the regular season.

However, Lausch said one loss won’t slow down the Crusaders.

“We’re in a great spot,” Lausch said. “We want to keep growing, getting better and fixing our mistakes. We need to make some plays and make the plays we didn’t make today.”