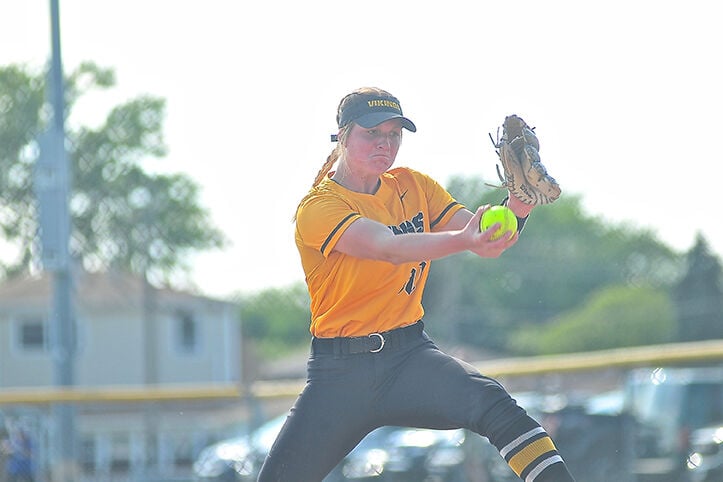 St. Laurence junior pitcher Abbey Pochie throws a pitch in the late innings. Leading the Vikings to a regional title, Pochie struck out 11 in a complete-game effort and had a perfect game going into the sixth. (Review photo) 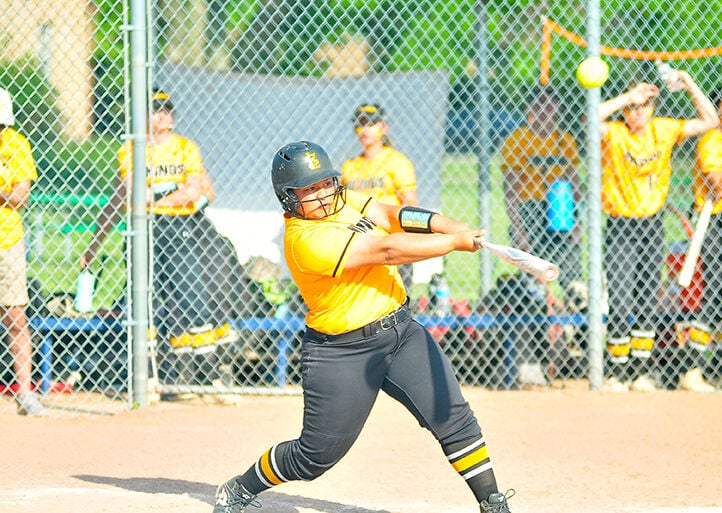 St. Laurence sophomore Madeline Davis blasts a double to the right-field corner to knock in a run. Davis finished with 2 hits and 2 RBI against Evergreen Park. 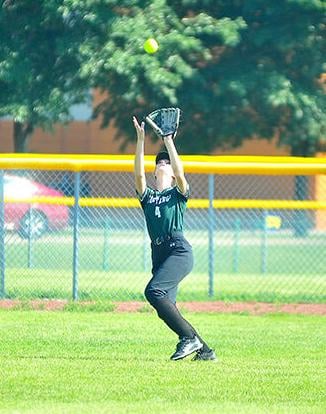 St. Laurence junior pitcher Abbey Pochie throws a pitch in the late innings. Leading the Vikings to a regional title, Pochie struck out 11 in a complete-game effort and had a perfect game going into the sixth. (Review photo)

St. Laurence sophomore Madeline Davis blasts a double to the right-field corner to knock in a run. Davis finished with 2 hits and 2 RBI against Evergreen Park.

In the regional championship, St. Laurence junior pitcher Abbey Pochie wasn’t aware that she was nearing a perfect game.

All Pochie knew was that she was absolutely rolling and felt good in the circle.

Then, Evergreen Park (EP) bunted for a hit, wiping away the chance of a perfect-o.

But, for Pochie, it was no problem.

“I honestly didn’t even realize [the possible perfect game] until the bunt. Then I thought, ‘Oh, wait a minute!’” Pochie said with a laugh. “Whatever, stuff happens. It’s the game of softball. Anything can happen. My defense did a great job the entire game with groundballs.”

Perfect game or not, Pochie delivered a gem in a complete-game effort with 11 strikeouts as host St. Laurence defeated EP 7-0 on June 3 in a Class 3A regional championship game at Macarthur Park in Burbank.

She allowed 2 hits and hit one batter in the win.

“I had a pitching lesson the night before and one this morning just to get me ready for the upcoming week,” Pochie said. “I felt really good today and for our upcoming games.”

With runners on first and second in the sixth, Pochie (Morgan Park, St. Cajetan) induced a groundout to shortstop to end the inning. She pitched around another single in the seventh, ending the game with her 11th strikeout.

Missing out late on the perfect game didn’t faze the junior.

“You think, ‘Get the game done,’” Pochie said. “I wanted to make it easy for my defense and easy for myself and try my best for the team.”

Playing immaculate defense behind her, the Vikings recorded 8 outs via groundballs and 2 infield pop-ups.

The St. Laurence outfield had an easy day, not even needing to make one play.

Sjostrom said it was all about staying focused but not getting too intense.

“For me, that means talking,” Sjostrom said. “When I’m in the game, I’m talking to my pitcher, shortstop, catcher, things like that. You want to know the next play and what’s going on.”

Backing Pochie up at the dish, St. Laurence scored 2 runs in the first, 2 in the fourth and 3 in the fifth.

The Vikings finished with 12 hits and 6 stolen bases, utilizing the team’s speed to force EP into some difficult plays.

“We’re not a home-run hitting team,” Sjostrom said. “We want to make defenses work, and when we do, it’s chaos usually. We’ll hit into the ground and beat out a throw, just get on base any way possible.”

Davis (Mt. Greenwood) had a RBI groundout in the first and added a RBI double in the fifth, going opposite field to the right-field corner to bring home Lapinski.

Davis said she keeps it basic at the plate.

“I’m not going to lie; I don’t think,” Davis said. “I go up there, see the ball and hit it. I try and keep it simple. I figured she had to come at me at some point, so I waited for a pitch I could hit.”

Through the ups and downs, hot and cold days at the plate, Davis said, the Vikings have recently found a good offensive rhythm.

“It took us a minute to realize who needed to be where and how we work together to make everything happen,” Davis said. “We have a lot of lefties; so, they’re spread out, and we mix in everybody else. It’s worked very well.”

For EP (13-7), junior April Kirts broke up the perfect game with her bunt in the sixth inning. Senior Jamie Coffelt added a single in the seventh.

With two runners on in the sixth, sophomore Lily Strand grounded out to short. The throw appeared to bring the first baseman off the bag, but the play was ruled an out, ending the threat.

“It’s a quick adjustment from some of the pitching we’ve seen lately, but that’s high school softball to make that adjustment,” Vucsko said. “Slow to quick, movement and no movement, it was an adjustment we unfortunately did not make today.”

The Mustangs lose 3 key seniors, Emily Manso (hit by pitch), Coffelt and Hannah Ortell, but they expect to return a strong class of juniors, including pitchers Strand and Nicole Reynolds.

Against St. Laurence, Reynolds pitched well, striking out 4 in 6 innings.

“The positive is we’re still super-young. We lose key players, but we return seven starters who started today,” Vucsko said. “They’re in key positions too, with pitchers, a couple outfielders, our catcher. It’s a good thing to look forward to.”