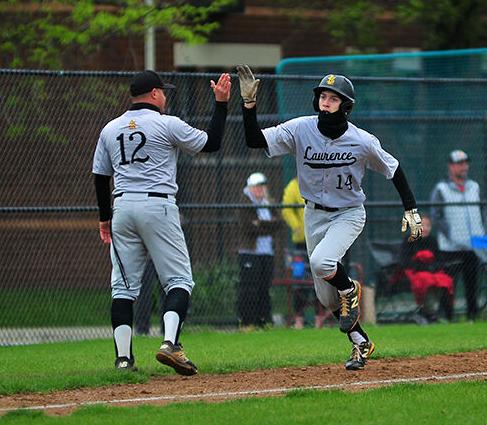 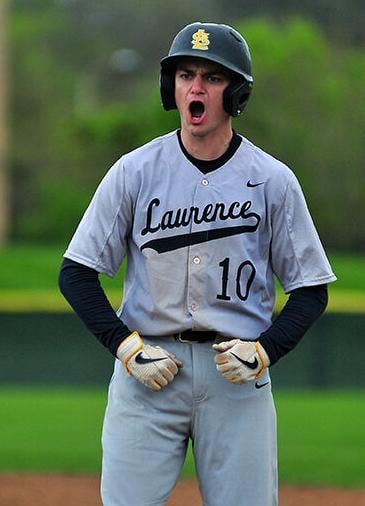 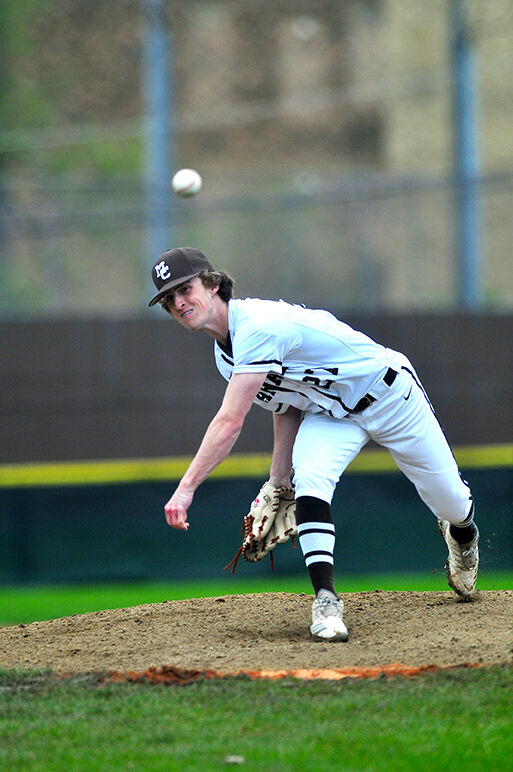 Knowing that he made strong contact on a hit to left-center field as the Vikings battled rival Mt. Carmel, St. Laurence sophomore Lucas Stulga took an aggressive turn around first.

“I knew I hit it hard and put a good swing on it, but I wasn’t sure if it was going to go, if it was leaving or not,” Stulga said. “I played it safe and hustled around the base.”

Stulga had nothing to worry about; this one was gone.

The sophomore right fielder hit a line-drive 2-run shot to left that helped St. Laurence earn an exciting 6-3 victory on May 4 over the host Caravan in a Chicago Catholic League (CCL)-Blue matchup.

St. Laurence beat Mt. Carmel 5-1 the day before to open the CCL-Blue schedule.

Making his varsity debut this season, Stulga has gone through some ups and downs in the season’s first weeks, but St. Laurence Coach Pete Lotus said he’s starting to see the sophomore find his niche.

“Lucas is a young guy, a sophomore who’s had some struggles, but these last few weeks, he has really looked a lot better,” Lotus said. “He’s working through some stuff and what it takes to hit at the varsity level. He’s working hard, so to see him come through is huge. That was a huge at-bat.”

St. Laurence scored 2 runs on a Kevin McCormick single in the second.

With Jake Merda drawing a walk and moving to second on a wild pitch, Stulga connected on a 2-2 fastball with 2 outs in the third to extend the Vikings’ lead to 4-0.

Adjusting to the pitching at the varsity level, Stulga said he feels stronger and more comfortable at the plate.

“It’s been a little rough. I can’t lie,” Stulga said. “It’s been an adjustment. Obviously, varsity pitching is going to be good. I’m feeling more comfortable every game. I’ve just got to keep going.”

Completing the quick 2-game sweep of the Caravan, St. Laurence finished with 6 hits and 6 walks as a team and also had a hit batsmen and a runner reached via an error.

Although Stulga’s homer was a welcomed addition to the offense, the Vikings have relied on a small-ball mentality.

McCormick, a University of Evansville recruit, finished 2 for 3 with a walk and 3 RBI.

“We’re definitely more of a small-ball team. We don’t have hitters like [Matt McCormick, now at West Virginia],” Kevin McCormick said. “We have to grind out at-bats and bring pitch counts up. We want to get to bullpens, and we’ll be in a good position.”

After Mt. Carmel drew to within a run at 4-3 in the sixth, St. Laurence responded with a little cushion for starter Mike Laudando.

McCormick knocked in junior Max Montgomery, and senior Daniel Baumgartner scored on a Mt. Carmel error to put the Vikings up 6-3.

“It was huge. You can relax just a little with those insurance runs,” McCormick said. “Every run matters. Having that cushion was huge for us.”

Closing out an impressive performance, Laudando set the Mt. Carmel lineup down in order to end the game.

The senior righty allowed 3 runs on 7 hits with no walks and 7 strikeouts.

Catcher Jason Krol praised Laudando for his efforts on the mound.

“The first and seventh were his best innings,” Krol, a Lewis University recruit, said. “He was attacking them, and they couldn’t find an answer. They were taking first pitch, which was a help for us because we were ahead each at-bat. Everything in the seventh was top-notch. Mike was lights out all game.”

“Early in the year we struggled a bit as we found our swings and where we belong in the lineup,” Krol said. “These games, we showed out offensively. We did the little things right and had great at-bats and ran pitch counts up.”

Junior southpaw Shane Curtin gave up 4 runs on 3 hits and 6 walks with 6 strikeouts in 5.1 innings.

Curtin, senior Tommy Egan and juniors Julien and Elias Hachem have pitched well in the starting rotation for Mt. Carmel.

“The positive overall has been the pitching,” said Mt. Carmel Coach Brian Hurry. “What we need to improve on is a little more consistency on both sides of the ball, especially with our lineup. We want to win them all, but we need to do it the Mt. Carmel way and compete and play winning baseball.”