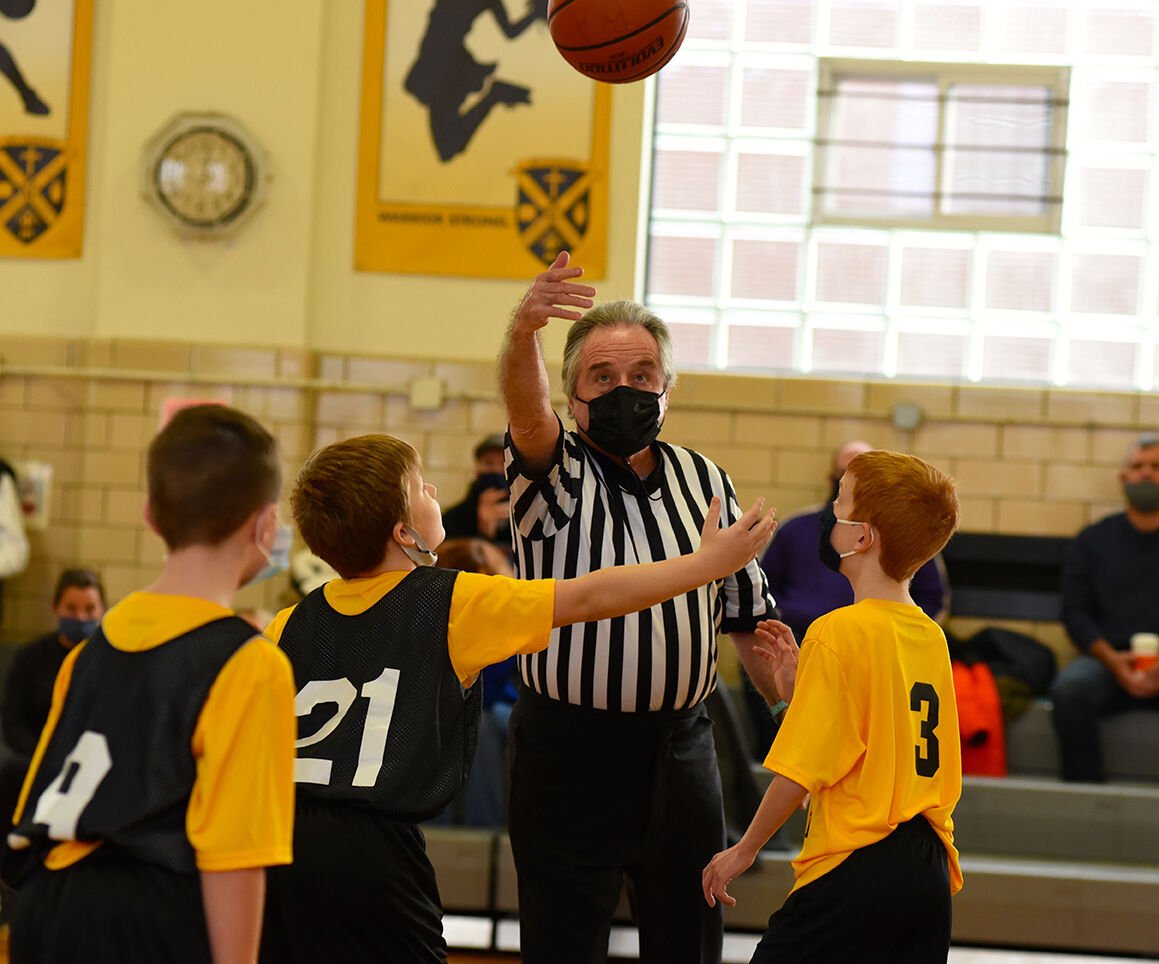 Jim McKenna tosses the ball for the opening tip-off of the 2021 Tom Hopkins Memorial Thanksgiving tournament at St. Cajetan. It was McKenna’s 30,000th career game as a basketball referee. He is a longtime former Morgan Park resident. (Review photo) 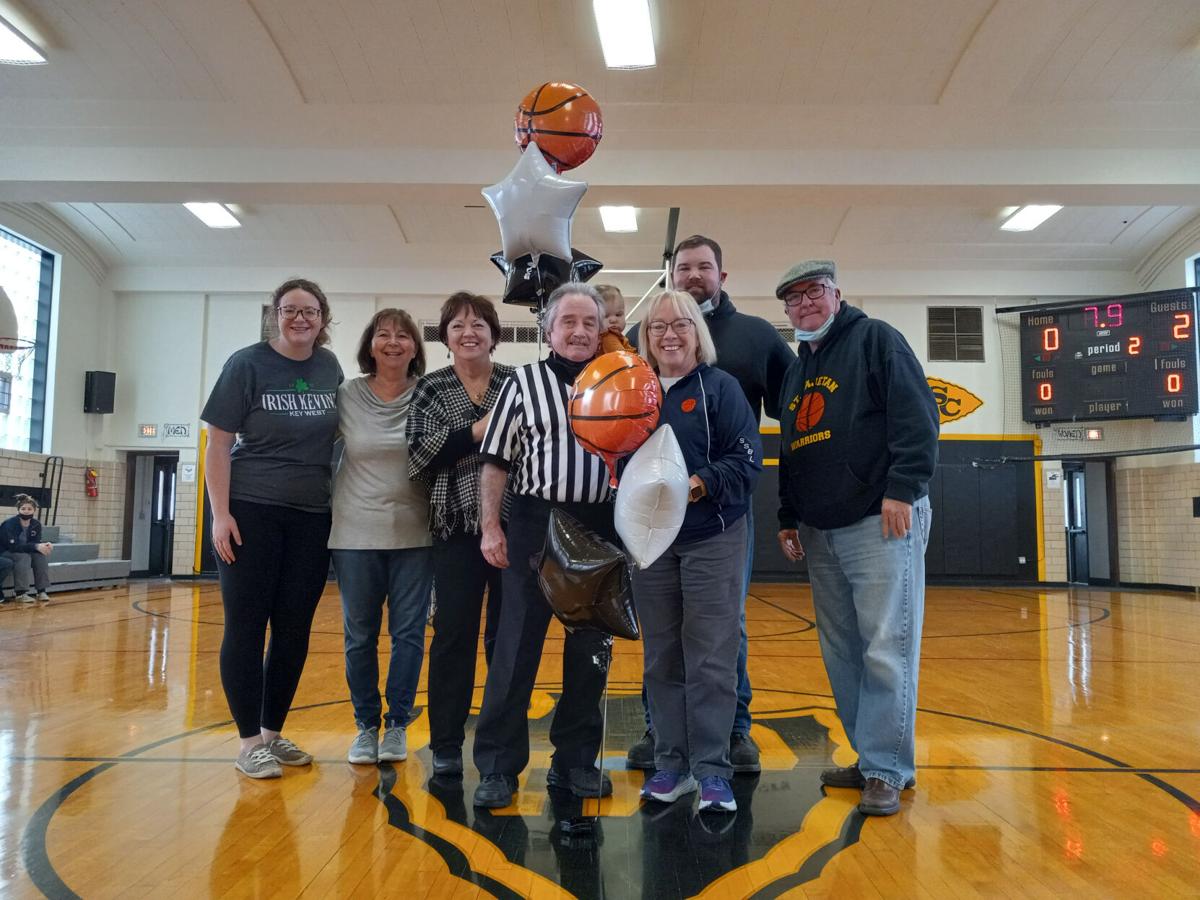 Family and friends of referee Jim McKenna, including his wife, Laura, his son, Kevin, his daughter-in-law, Emily, his granddaughter, Nora, his sister-in-law, Rita Hickey, and friends Beth and Bill Hickey, joined McKenna in celebration of his 30,000th game as a basketball referee. (Review photo) 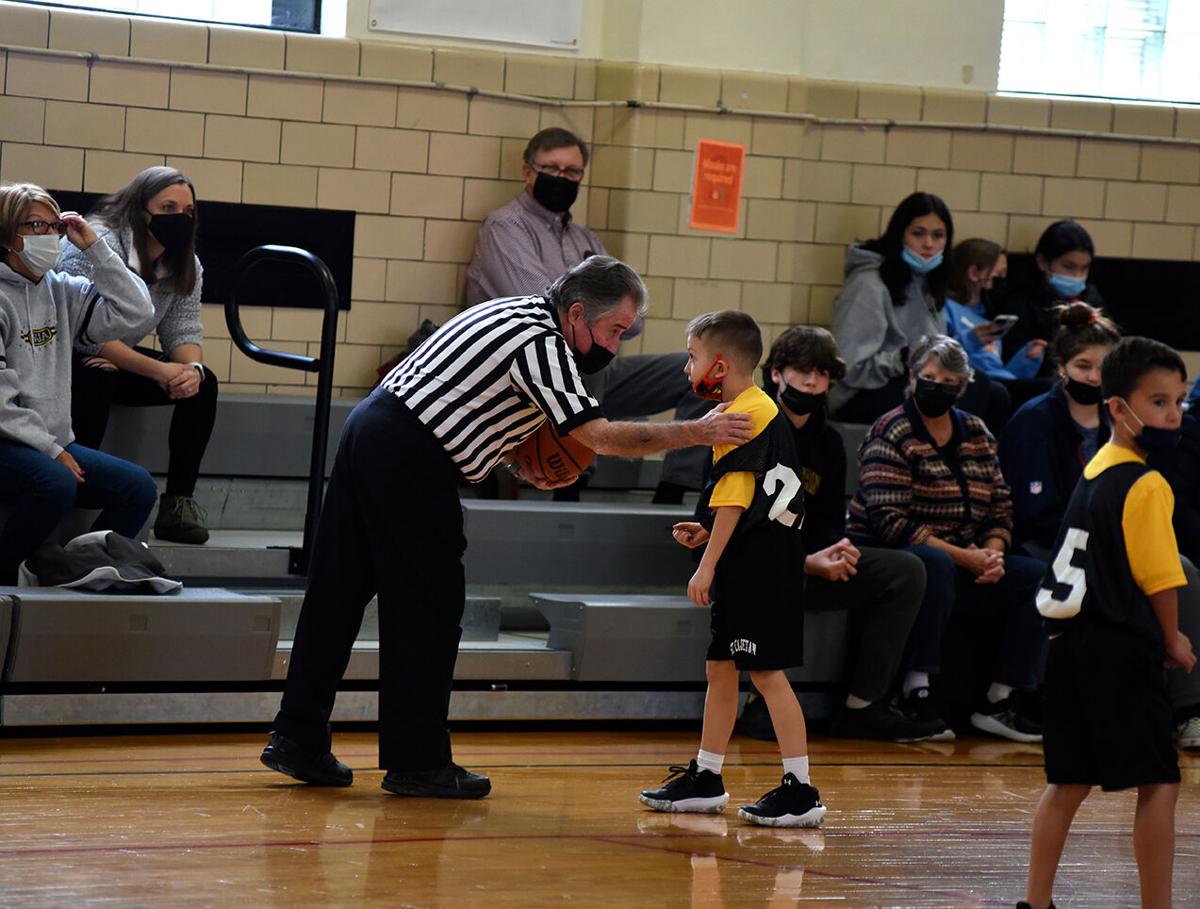 Jim McKenna tosses the ball for the opening tip-off of the 2021 Tom Hopkins Memorial Thanksgiving tournament at St. Cajetan. It was McKenna’s 30,000th career game as a basketball referee. He is a longtime former Morgan Park resident. (Review photo)

Family and friends of referee Jim McKenna, including his wife, Laura, his son, Kevin, his daughter-in-law, Emily, his granddaughter, Nora, his sister-in-law, Rita Hickey, and friends Beth and Bill Hickey, joined McKenna in celebration of his 30,000th game as a basketball referee. (Review photo)

Bright and early on Nov. 26—the day after Thanksgiving—Jim McKenna was ready to begin a busy couple of days of youth basketball.

A longtime referee and tournament organizer of the St. Cajetan Fourth-Grade Thanksgiving tournament, McKenna was doing double-duty as this year’s tournament got underway.

As he’s done many times over the decades, McKenna walked to midcourt, conducted the opening tip off, and the game was on.

He started working as a ref in 1971, and he’s been officiating ever since. The milestone coming on the first game of the 2021 tournament was the result of a bit of synchronicity.

“It was very, very special. It kind of fell that way that this was the game,” McKenna said. “I’ve helped run the tournament the last 20 years. It’s a lot of fun to see the kids smile and get that enjoyment from playing.”

For McKenna, it has been a busy road since he first took the court as a ref.

The former Morgan Park resident coached throughout Chicago at the youth and high school level.

And while McKenna loves the game of basketball, in recent years he’s focused more on the youth game, both officiating and helping organize and run numerous tournaments in the area.

For McKenna, the focus on helping young athletes, from third- and fourth-graders on up through eighth grade, has always been foremost.

Over his 50-year officiating career, McKenna has been inducted into the Hall of Fame of several organizations, and he’s refereed games featuring numerous standout players who went on to bigger and better things at the next level, athletes such as Jon Scheyer (Glenbrook North alum, played at Duke, currently a Blue Devils assistant and will take the head coaching job for the 2022-23 year) to Juwan Howard (Michigan standout and part of the Fab Five, 19-year NBA veteran, current Michigan head coach) and many more.

McKenna grew up in the parish of St. Felicitas Roman Catholic Church and graduated from Leo High School in 1966. He then coached at St. Felicitas for four years before making the jump to being a referee.

He’s loved every minute, whether it’s an early-morning fourth-grade tournament game or an Illinois High School Association (IHSA) state championship game, of which he has officiated four (3 girls, 1 boys).

“I started working games for $5 a ballgame, which was a lot of money. I thought ‘Hey, this is a lot of fun, and I’m getting paid for it!’” McKenna said. “It’s been the joy of my life since I started. I was a gym rat when I was a little kid going back to St. Felicitas, and I’ve always loved the game of basketball.”

As for that amazing 30,000-game achievement, McKenna has religiously kept a list of all the games he’s officiated since 1971. The list includes the game, the final score, his co-referee and how much he was paid.

The milestone game was originally supposed to be played earlier in the week of Nov. 22, but some cancellations pushed the game back to the tournament opener at St. Cajetan.

“I’d write the time and date, score, all that stuff. It’s a force of habit,” McKenna said. “I started 50 years ago and have done it ever since. I did get rid of about 40 years’ worth of scores. [My wife] Laura put a little bit of pressure on me when we moved.”

Jim and Laura McKenna were longtime Morgan Park residents before moving to Palos Heights about 7 years ago.

They have been married since 1984, and Laura knows her husband’s love of the game.

“It’s his passion. Last year without basketball, he was a fish out of water,” Laura said. “It’s his claim to fame. He doesn’t golf, doesn’t fish, doesn’t drink at a bar. This is what he wants to do. It’s like a limb. It’s part of him.”

Bill Matt, the longtime commissioner of the Southside Catholic Conference and South Suburban Basketball Leagues for both boys and girls basketball, said that, whether it’s as an official, a tournament organizer or just a basketball fan, McKenna has meant so much to youth sports on the South Side and in the south suburbs.

After a year away from games due to the pandemic, McKenna is thrilled to be back in the gym doing what he loves.

“I was going crazy,” McKenna said with a laugh. “I don’t have a lot of hobbies. This is my hobby, being involved in sports. It’s fantastic to be back. My wife, Laura, is a saint. I’m really enjoying being back in the gym.”