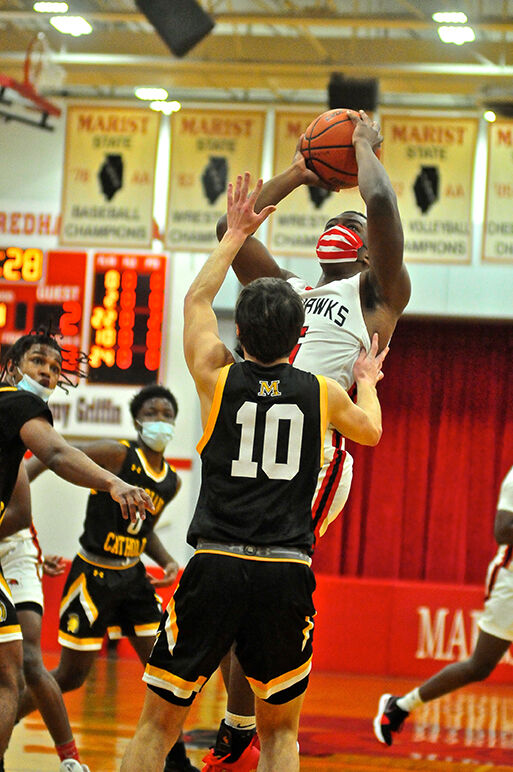 Marist senior guard Alex Knight elevates for a shot in the lane. Knight powered the RedHawks with 21 points and 11 rebounds against Marian Catholic. (Review photo) 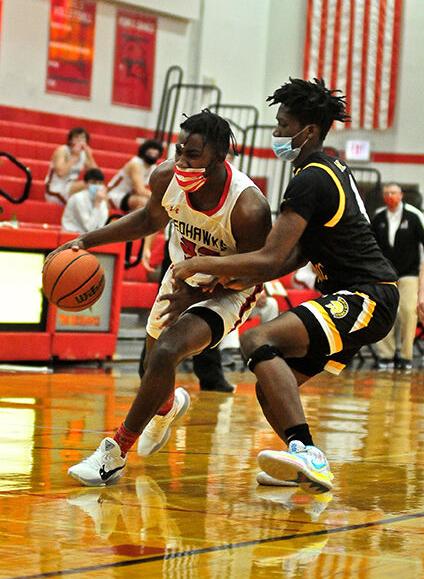 Marist senior guard Alex Knight elevates for a shot in the lane. Knight powered the RedHawks with 21 points and 11 rebounds against Marian Catholic. (Review photo)

Alex Knight has been a starting guard for the Marist boys basketball team since his sophomore season.

Like other athletes, he always looked forward to being a senior and playing a leading role in that milestone season.

However, due to the pandemic, it was doubtful that Knight’s senior season, and that of athletes across the state, would ever come to be. Fortunately, progress in the health crisis enabled state officials to allow high school sports to return.

So, despite the RedHawks’ close loss to rival Marian Catholic in Marist’s season opener at home on Feb. 9, they were happy to just be back on the court playing a game.

Knight and Jabari Hill are key senior leaders for Marist.

“It’s real special to play. We’ve worked so hard to have this senior season,” said Knight, a Beverly resident and Sutherland Elementary School grad. “This moment, getting this opportunity, means a lot to us. Jabari and I, we both love this program. We’ve played together all four years. The thought of not having a season was pretty sad.”

The 5’9” guard finished with 21 points and 10 rebounds for Marist in its return to competition.

Marist took control early on its way to a 14-9 lead two minutes into the second quarter. However, Marian Catholic wasn’t fazed and put together a 19-5 run before halftime to go up 28-19.

Marist pushed back in the second half, twice cutting the deficit to one point, but it could never get over the hump.

“Marian went on that one stretch in the second quarter. You cut that out, and we win the ballgame,” Knight said. “Our rebounding, we missed a lot of boards, so if we clean that up, we can turn the score around. This game gives us a lot of confidence.”

Marist Coach Tim Trendel said his team treats each game like a series of mini-games, attempting to win a bunch of four-minute battles.

Winning those battles leads to winning games, and although the loss was disappointing, Trendel said his team had the potential for victory.

“We kind of fell apart in that stretch in the second,” Trendel said. “We need to play as a team. Really good, connected teams stick together when things get tough. We splintered and allowed their run. If we play as a team, we have a chance to do some things offensively and defensively.”

With the start of the season pushed back from November, Knight said he made the most of the extended offseason.

Hitting the weights hard, Knight put on nearly 10 pounds of muscle in preparation for a successful senior season and a chance to play at the next level.

“Going into college and fighting to get to the rim, I knew I’d have to get stronger,” he said. “I’ll be more physical when I’m finishing against bigger, tougher guys. The offseason was a lot of training, making my core stronger and looking to be more explosive.”

As a young Marist team finds its identity through the unusually short five-week season, Trendel said Knight’s play will be invaluable.

“Alex has to be the glue that keeps us together,” Trendel said. “When I’m the calmest guy in the gym, we’ve got problems. Everybody needs to calm down, relax and trust what we need to get into. Alex can be that calming influence, especially with young kids who haven’t seen much floor action.”