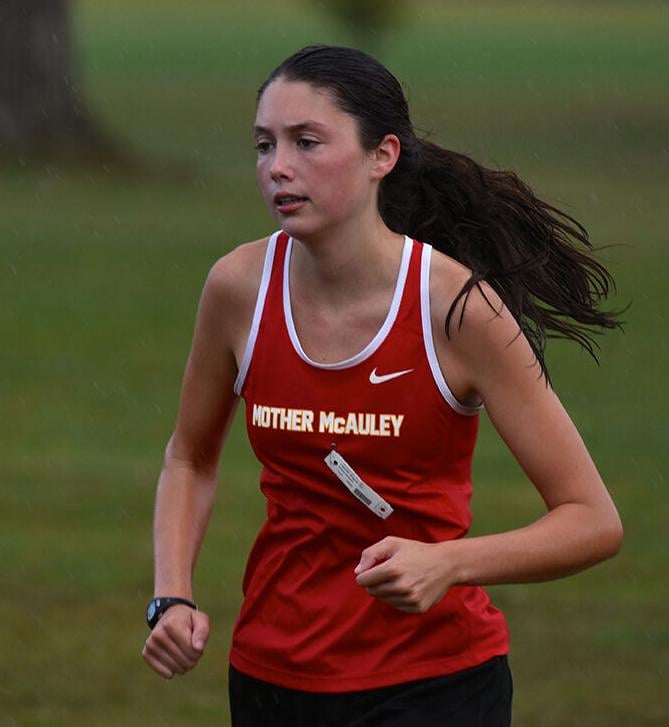 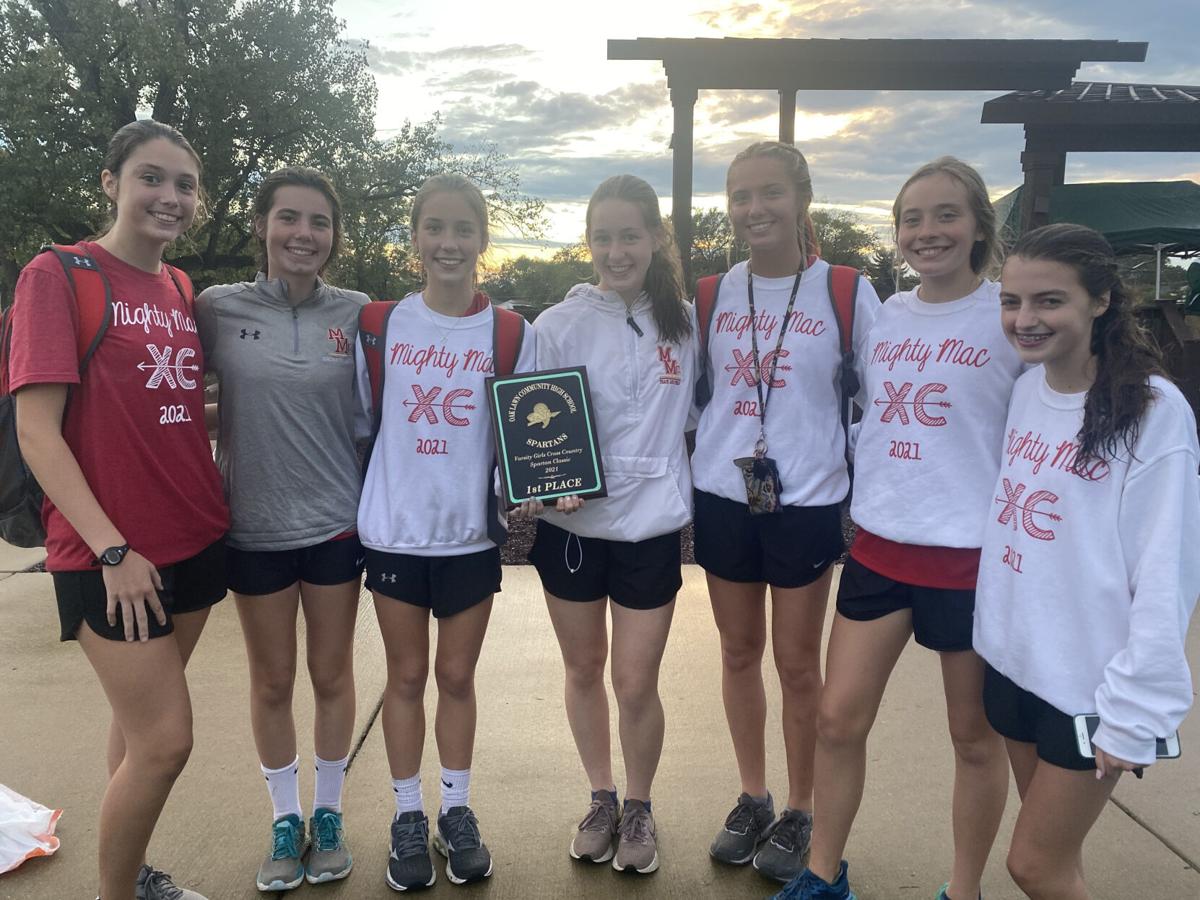 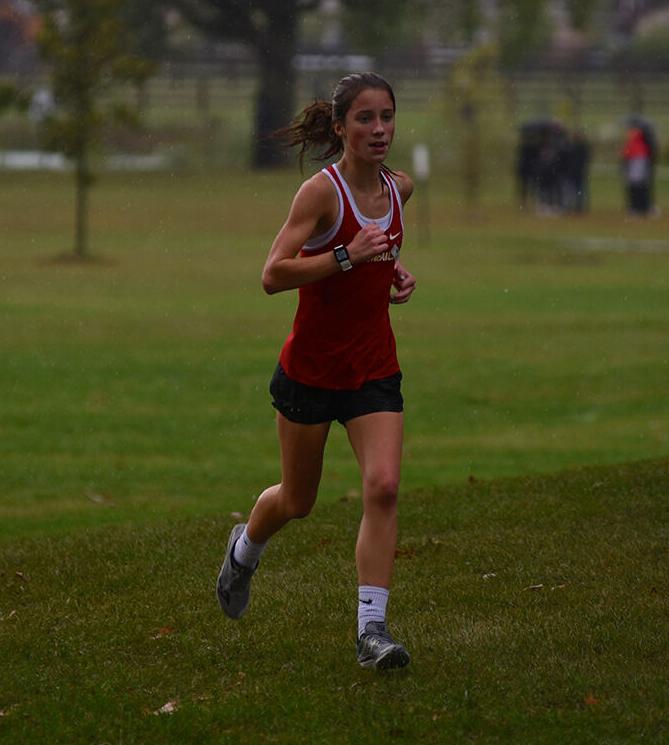 Sophomore Nora Enright races in the rain for Mother McAuley at 50-Acre Park in Evergreen Park. Enright finished the Spartan Classic in 20:27, the top time for the Mighty Macs. (Review photo) 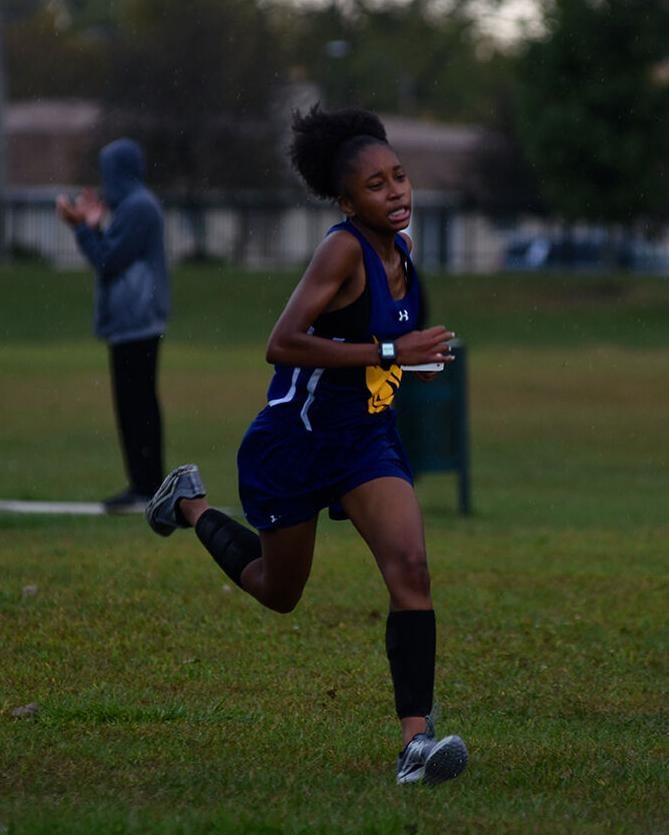 De La Salle junior Keyaira Moore sprints to the finish chute to lead the Meteors. Moore finished sixth overall in the 37-runner field of a race conducted in successive flights instead of the usual group start. (Review photo)

Sophomore Nora Enright races in the rain for Mother McAuley at 50-Acre Park in Evergreen Park. Enright finished the Spartan Classic in 20:27, the top time for the Mighty Macs. (Review photo)

De La Salle junior Keyaira Moore sprints to the finish chute to lead the Meteors. Moore finished sixth overall in the 37-runner field of a race conducted in successive flights instead of the usual group start. (Review photo)

Running at the 31st annual Spartan Classic invitational, Mother McAuley senior Heather Wagner counted down the seconds as she waited for the whistle from the official starter.

Then, rain started to drizzle, and it got a little heavier before turning into a steady downpour.

But, none of that bothered Wagner, and she was off with the whistle.

“I actually love running in the rain, so for me, it helped a lot,” Wagner said. “It was definitely fun to run in it. You’re watching it rain all day and thinking the race would be canceled. When it does rain at the start, you think, ‘OK, it’s now or never. We have to go.’”

The race features a unique format with flights taking off every 25 seconds. The No. 7 flight started first with the following flights each starting 25 seconds later through each team’s No. 1 flight.

As for the heavy rain, it ended shortly after the varsity race ended.

Enright (Most Holy Redeemer) learned about the unique format of the race just minutes before it began.

“I was really nervous, a little scared, because I like running with Lily,” Enright said. “I was nervous to not have her next to me. It turned out to be OK. It was kind of nice. The girls who started in front of me, that’s motivation to keep going and try to pass them as well.”

Wagner (20:37) and senior Evelyn Rowan (20:34), the Mighty Macs’ two top runners, finished seventh and eighth in the individual standings as they tried to chase down their teammates while also passing runners from other teams.

Wagner (St. Christina) said the format was a fun change of pace.

“I honestly love running with my teammates, so starting with them is more how I like to run,” Wagner said. “I could see them, but I wasn’t able to catch up. I definitely liked passing people. That was fun, catching runners from the earlier flights.”

Barron was the first runner off in the No. 7 flight followed by Signorelli, Kmak, Enright, Coakley, Wagner and Rowan for McAuley.

Enright ran with the junior varsity as a freshman last year but has been a steady top-seven varsity runner as a sophomore. She chalked up to her success to a busy summer training schedule.

“I ran with JV last year. In the summer, I started training a lot,” Enright said. “That really helped. I went into the season all trained and in shape already.”

Mother McAuley will compete at the Girls Catholic Athletic Conference (GCAC) meet on Oct. 16 at Lewis University and then at the Class 3A Sandburg regional on Oct. 23 at Midlothian Meadows.

Wagner said the Macs have the potential to accomplish big things.

“Our goal is definitely to all be together in time,” Wagner said. “The time gap is shrinking. It’s getting smaller and smaller every week. For conference, we want to be a pack running. It can be intimidating when you see a group of girls coming after you.”

Junior Keyaira Moore is accustomed to being at the front of a race. The De La Salle junior sets the pace and picks off as many lead runners as she can.

However, with the flight format at the Spartan Classic, Moore was in chase mode from the start.

The De La Salle junior finished sixth individually, starting in the last flight and racing past one competitor after another in the 37-runner field.

“It was the first time I’d done this type of race, so it was definitely an adjustment. It does impact your strategy,” Moore said. “When I see other people in front of me, it’s kind of like a game of cat and mouse. I can run harder. You see the people in front, and then you’re trying to push and catch them.”

Moore qualified for state as a freshman.

Although she’s not looking too far ahead of the GCAC meet, the regional and sectional, Moore is hoping for a return to state.

“The season’s been OK so far. My times are getting there,” Moore said. “I’m still trying to shave the time down, but the end goal for right now is to make state and try to place as high as I can.”