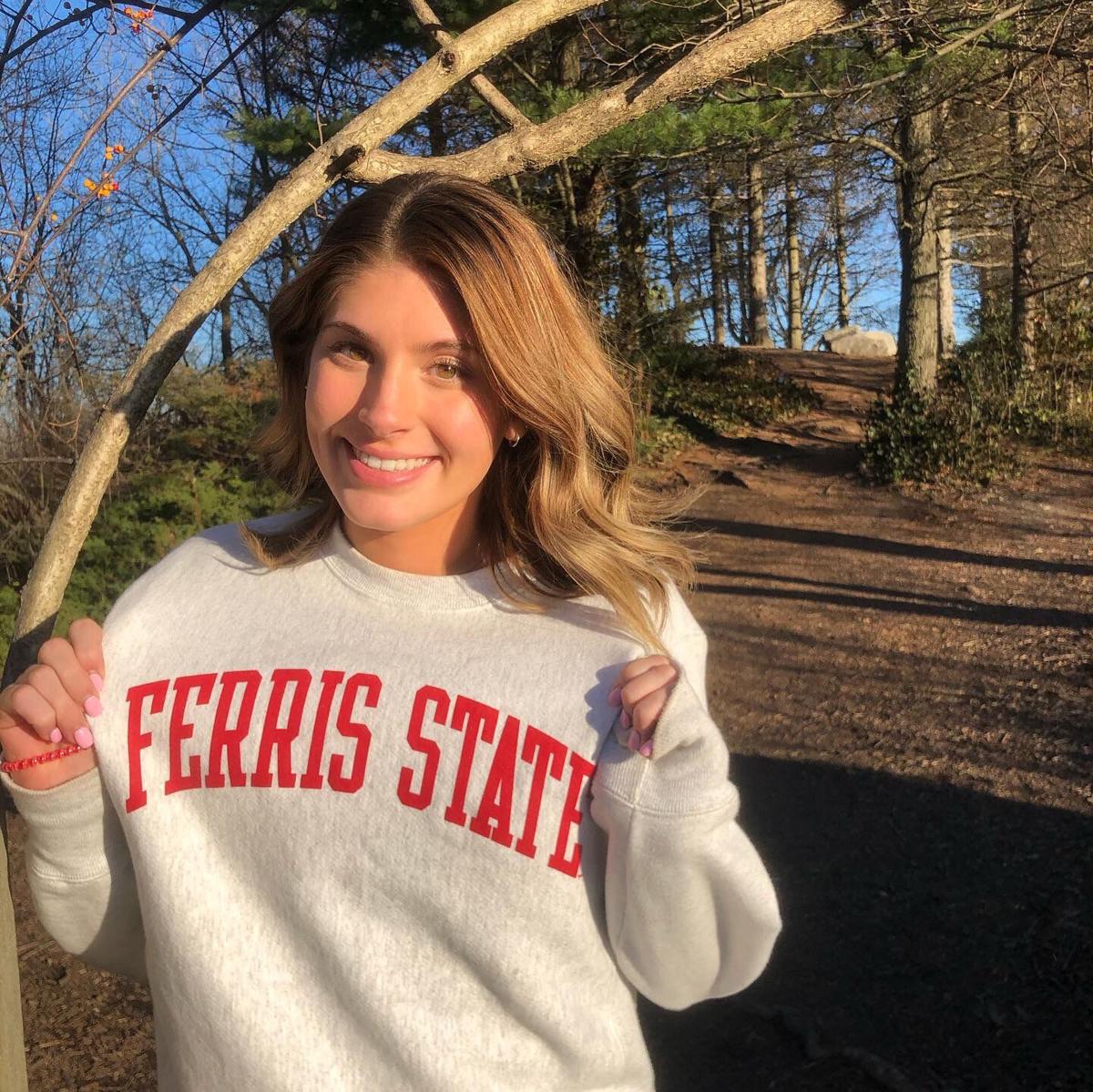 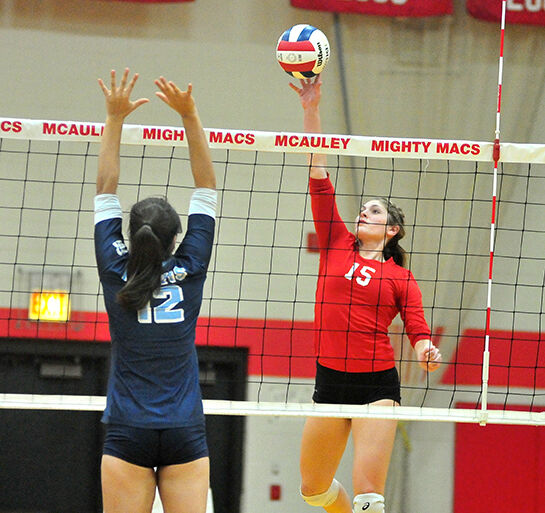 Connie LeBel rips a kill in Mother McAuley’s regional championship victory over Reavis in 2019. LeBel has led the Mighty Macs in kills as a sophomore and junior. (Review file photo) 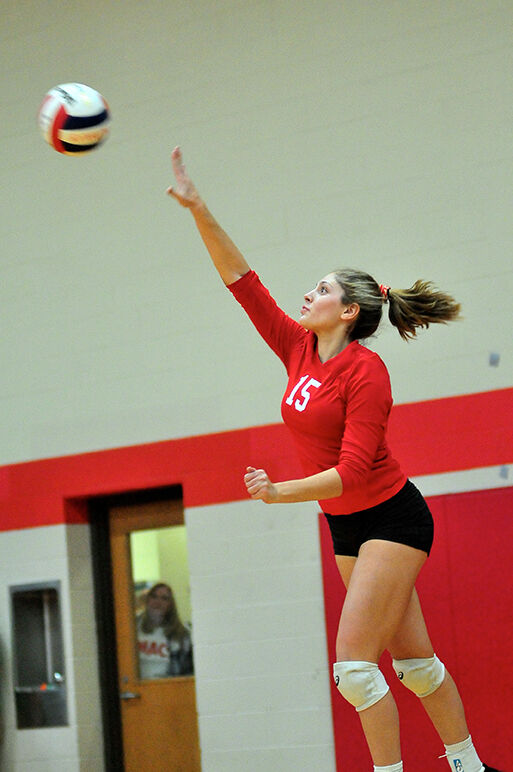 Mother McAuley outside hitter Connie LeBel serves in a match during her junior year. Coming off a serious knee injury that she sustained in February 2020, LeBel will be a key leader for the Mighty Macs in her senior year. (Review file photo)

Connie LeBel rips a kill in Mother McAuley’s regional championship victory over Reavis in 2019. LeBel has led the Mighty Macs in kills as a sophomore and junior. (Review file photo)

Mother McAuley outside hitter Connie LeBel serves in a match during her junior year. Coming off a serious knee injury that she sustained in February 2020, LeBel will be a key leader for the Mighty Macs in her senior year. (Review file photo)

In choosing a college, Connie LeBel had all the usual items on her checklist.

The Mother McAuley senior outside hitter wanted to find the perfect fit to continue her academic-athletic career. She wanted the opportunity to keep playing volleyball, to have quality teammates and to attend a school not too far from home.

And, the talented athlete had one other item on that list.

LeBel wanted a school with a coaching staff that, despite her going through rehab last year on an injured left knee, remained interested in signing her. She found that in Ferris State University, and in early December, she committed to the school in Big Rapids, Mich.

“When I got injured last spring, I’d narrowed it down to a couple schools I really liked,” LeBel said. “Ferris State stuck with me the whole time. They were very loyal. The coaching staff stuck with me through the whole process. That meant a lot.”

For LeBel (Crestwood, Incarnation), a 5’9” senior outside hitter, it was a huge positive at the end of a tough 2020.

After two impressive seasons with the Mother McAuley varsity volleyball team, leading the Mighty Macs in kills as a sophomore and junior, LeBel was ready to excel with her 17U club team, Michio.

The 17U season is typically a key time for incoming seniors to catch the eye of college coaches on the recruiting trail. However, LeBel’s season was brutally cut short.

In a tournament in St. Louis last February with Michio, LeBel went up to make a play on a set close to the net. She landed awkwardly, and her left knee buckled.

She had dislocated her kneecap, but in sustaining the injury, her quadriceps pulled her kneecap back into place. Still, the damage was done. She had torn her ACL, MCL and meniscus.

“It was a tighter set, and I tipped it over the block. I landed, and my left leg sort of leaned away. My left leg buckled,” LeBel said. “There was so much swelling, just so much so quick. I was lying there frozen still on the ground. I didn’t focus on the pain.”

The timing could not have been worse as LeBel wouldn’t be able to play in front of recruiters because her 17U club season was over.

However, in a way, the timing couldn’t have been better.

After the swelling subsided in her knee, LeBel underwent surgery on March 13, just before elective surgeries were shut down throughout Illinois due to the COVID-19 pandemic. If scheduled a day or so later, LeBel’s surgery would have been pushed back several months, delaying the rehab process and putting her senior season in doubt.

“I certainly felt very lucky. I had surgery on Friday the 13th, of all days,” LeBel

said with a laugh.

Her rehab process began, and slowly but surely, she recovered from the terrible injury. She rehabbed at SportSpace, an athletic training facility in Chicago Ridge. Talking with doctors, LeBel and her parents came up with a plan built around preparing her for the 2020-21 season at McAuley.

However, the pandemic had other ideas, and the Illinois High School Association postponed girls volleyball from its usual fall schedule to a winter/spring season set to begin in February 2021.

Fortunately, the new schedule allowed LeBel additional time to strengthen her knee. Returning to volleyball started at a basic level, just playing back row in defensive drills. Eventually, she received clearance from her doctor to start jumping.

“With an ACL injury, you can come back in six months, but with physical therapy and everything, it’s more of a nine-month process,” LeBel said. “I wanted to build my mobility back, so I can explode [on jumps] and be faster. That’s the main goal, so I’ve been doing a lot of strength work.”

LeBel has been a go-to hitter for the Mighty Macs, leading the team in kills as a sophomore (229) and as a junior (260), while also playing solid defense in the back row and at the net. She also has a strong service game.

LeBel’s vertical jump makes her one of the state’s most athletic outside hitters. Coming off a knee injury that can deprive athletes of their jumping abilities, LeBel rebuilt from the ground up.

Her game is not just pure power anymore; it’s an all-around attack.

“I am trying to build my vertical back up, but I’m learning to swing in different ways, too,” LeBel said. “I work through the frustrations and work my butt off to get back to that point. I take my time, think about the shot, be smarter and don’t swing with too much power.”

Ferris State is one of the top Division II programs in the country, making the NCAA tournament the last nine seasons.

The Bulldogs have recruited strongly in the Chicago area, and Mother McAuley grad Katie O’Connell (2017) and Marist grad Maddie Arundel (2019) are also on their 2020-21 roster.

Now, the waiting game for LeBel’s senior season continues. Although volleyball is scheduled to start next month, nothing has been finalized.

LeBel is just hoping for a chance to play, both for her teammates and to show the results of her long road back from a serious injury.

“I’m super-excited. I’ve been getting ready, so this what I’ve been waiting for,” she said. “I have the same work ethic and want to show I’m even better than before because I have gotten more time to recover. I’m not letting this slip away. I’ll keep working.”