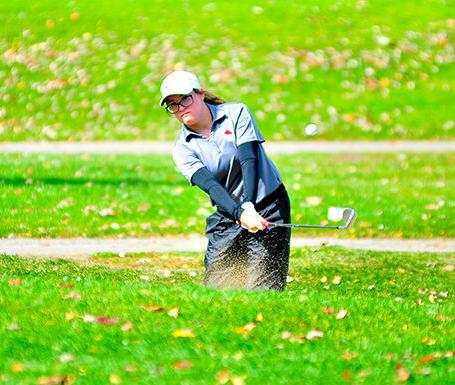 Marist junior Mallorie Clifton hits cleanly out of a trap onto the green at No. 14 at Silver Lake Country Club. Clifton shot 83. She advanced to the sectional the last three seasons. (Review photo) 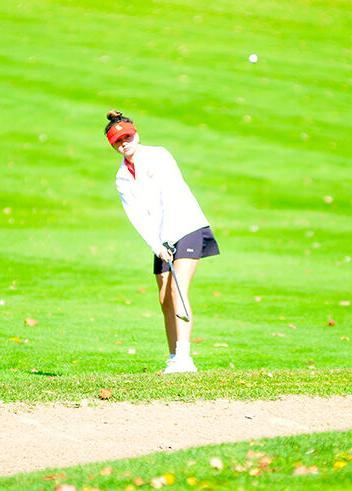 Mother McAuley senior Gabi Hernandez chips onto the green at No. 14. Hernandez is a four-year varsity player for the Mighty Macs. (Review photo) 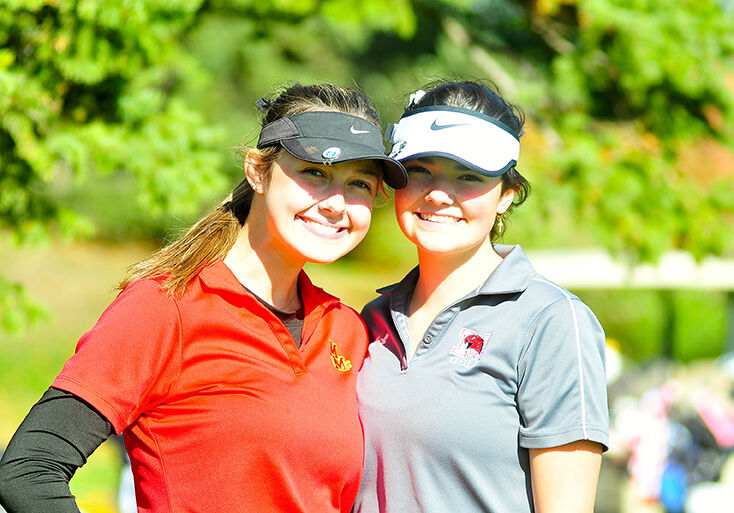 Marist junior Mallorie Clifton hits cleanly out of a trap onto the green at No. 14 at Silver Lake Country Club. Clifton shot 83. She advanced to the sectional the last three seasons. (Review photo)

Mother McAuley senior Gabi Hernandez chips onto the green at No. 14. Hernandez is a four-year varsity player for the Mighty Macs. (Review photo)

Mallorie Clifton has seen her golf game improve throughout an upside-down 2020 season.

The Marist junior has hit consistently from the tees, and her short game came on strong at the right time of the season.

However, in competing in the last meet of the year, Clifton took it all in. She was simply glad to be playing golf.

Clifton shot 83 on Oct. 13 at the Class 2A Sandburg sectional at the Silver Lake Country Club’s North course in Orland Park.

“It was a tough year. We only played nine matches,” Clifton said. “We’re out here to have a good time. If you do well, you do well. If you don’t, it’s an experience.”

Clifton finished in four-way tie for 16th place. It was the third straight year that she advanced to the sectional.

The Illinois High School Association originally scheduled only a regional round before adding a sectional meet for both boys and girls golf and cross-country.

No state meets will be held, and the sectional meet was the end of the fall season.

Playing in sunny and windy conditions at Silver Lake, Clifton said she put together a solid round, especially on the greens.

“My putting was really good. I only had one three-putt, so that was good,” Clifton said. “My drives killed me. I was in the trees a lot today. That killed my round. My lag putting was good. I usually leave it way short or hit way long, but that was a good part of my game today.”

With only one senior consistently in the lineup for Marist this year, hopes are high for the 2021 fall season when things will, hopefully, be back to normal, including a state meet.

“I hope next year is longer and the season more normal,” Clifton said. “Hopefully, we can go to state as a team. That would be pretty cool, especially because it’s going to be my senior year. That would be special.”

Gabi Hernandez had competed at the sectional meet as a freshman three years ago as the Mighty Macs advanced as a team.

But, for Hernandez, now in her senior year, this season was different.

Advancing individually with senior Morgan Soch, Hernandez loved the opportunity to play one last round for McAuley.

“There are so many emotions. I feel like it went so fast,” Hernandez said. “I remember being on varsity as a freshman. It was so intimidating. Now being a senior and a team captain, it’s cool to see how things have changed. Now we’re the seniors. It’s crazy how quick it went.”

Hernandez is a Mt. Greenwood native and St. Christina Elementary School graduate. Competing at the sectional, she battled through an off round, tying with Soch in 59th place with a round of 103.

“Oh my gosh, a tough round,” Hernandez said, “it started out tough, and at the end, the round blew up. There were some good shots, some good putts, so it wasn’t all bad.”

Throughout her senior year, Hernandez had a helpful mentor to bounce ideas off of, her older sister, Morgan, a 2019 Mother McAuley grad.

Morgan was a standout golfer for the Mighty Macs and is now in her sophomore year at Marian University.

“We talk a lot about golf and everything,” Gabi said. “She doesn’t have a golf season this year, just practicing, so we’ll FaceTime and talk about how I’m doing. She was so excited when I said I was going to sectional. We like to keep up with each other.”

The longtime friends would be playing in the same foursome at Silver Lake.

Flynn shot 96, good for 50th place. Soch battled through a tough round, carding a 103, tying her teammate, Hernandez, for 59th place.

Flynn loved the chance to play one last high school round with Soch.

“Our dads are best friends, so we’ve been close,” Flynn said. “We used to take lessons together, so we had so much fun today.”

Flynn said she struggled with her putter at the sectional.

“My irons weren’t bad today. Usually, they’re pretty bad,” Flynn said. “I was close on a lot of putts, and it just didn’t happen. I hit an iron shot on No. 2 that wrapped around a tree and landed on the green from 150 yards out. That was super-helpful.”

Soch wrapped up a solid high school career with the Mighty Macs with her sectional round. She was a team captain with Hernandez this year.