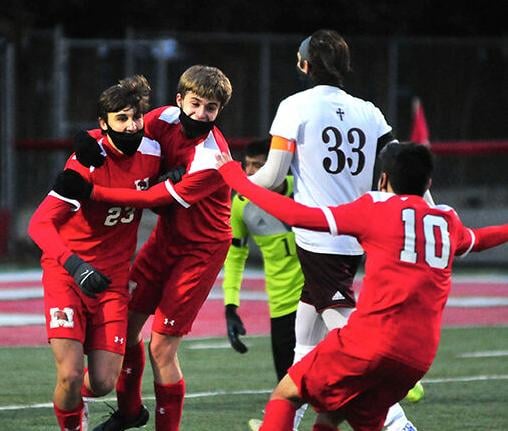 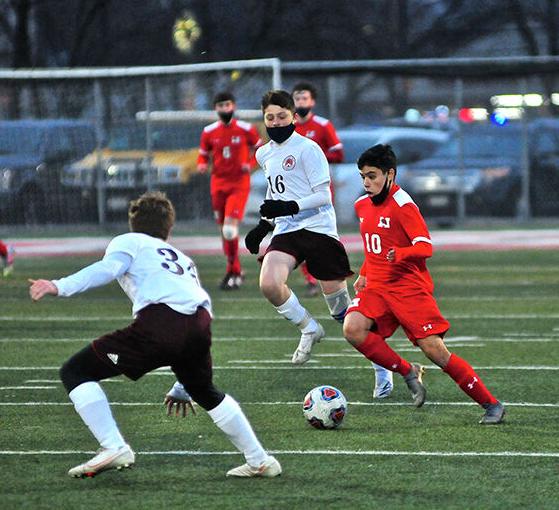 Marc Carreon sprints up through the midfield before passing to senior Max Lacey for the opening goal. A junior midfielder, Carreon scored a goal later in the first half as Marist went up 2-0. (Review photo) 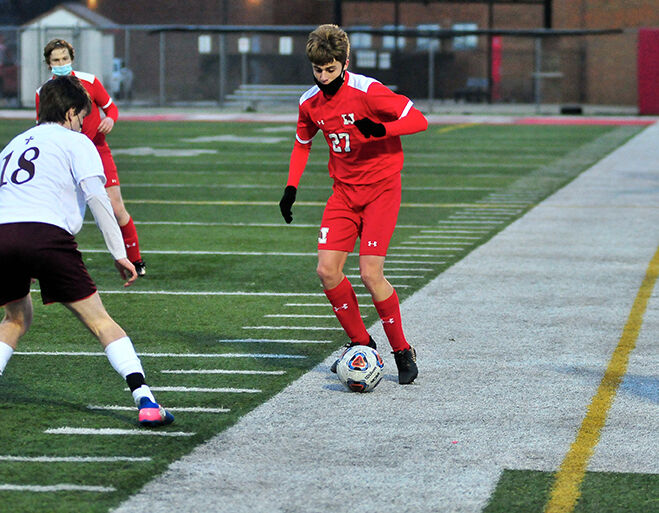 Sophomore midfielder Danny Olsen works up the sideline in the first half. Olsen, a Most Holy Redeemer Elementary School graduate, scored early in the second half that saw Marist score 3 goals. (Review photo)

Marc Carreon sprints up through the midfield before passing to senior Max Lacey for the opening goal. A junior midfielder, Carreon scored a goal later in the first half as Marist went up 2-0. (Review photo)

Sophomore midfielder Danny Olsen works up the sideline in the first half. Olsen, a Most Holy Redeemer Elementary School graduate, scored early in the second half that saw Marist score 3 goals. (Review photo)

Throughout the early goings of the short season, Marist senior forward Jimmy Valek has witnessed a confident RedHawks squad.

Marist has always been a solid defensive team, one that controls the ball in the midfield, but this year, Valek and his teammates are quite comfortable going on the attack.

Hosting rival Br. Rice on March 16 in the Pulaski Cup, Marist scored 2 goals early and cruised to a 5-0 victory.

“We’re confident about what we can do on offense,” Valek said. “Through three games, we’ve got 3, 3 and 5 goals. Our forwards are definitely producing this year. Everybody is playing their role and playing hard. We’ve got a ton of experience up top.”

Valek has been a four-year varsity player for the RedHawks, and Marist Coach Sean Maxwell has been impressed with the efforts of his senior captain.

“We have quickness and speed up there on top,” Maxwell said. “Jimmy has come a long way. He’s always been solid, but he’s added speed and pace to his game. We saw him work in the offseason. He’s the guy who has been pushing this team.”

The boys soccer season is typically played in the fall, but due to the pandemic, it was pushed to the spring along with football and girls volleyball. The spring season for soccer will continue through April 17.

Valek said he’s thrilled by just the opportunity to compete, especially in a big rivalry game that’s picked up impressive momentum in recent years with some classic showdowns.

“Last year, we won in a shootout, and we took a loss the year before,” Valek said. “To get a win against a good rival at home and get a big 5-0 win where all our guys got in, it was definitely a good experience for everyone.”

Halfway through the first half, Marist broke through on a quick strike.

Taking a pass from Valek, Carreon raced across midfield and cut to the middle. He delivered a sweet pass to Lacey going up the right side.

Lacey (Mt. Greenwood Elementary) faked a shot with his right foot but cut inside on his defender, blasting a shot to the right post for the opening goal.

Carreon added his own score with 8:06 left in the half, working into the box on the right side and then firing a shot to the far left post.

“[On Lacey’s goal], I dribbled through and saw Max. He made a great run, so I let him have it,” Carreon said. “He did the rest. It was a great finish. It was beautiful.”

Carreon, a 5’2” junior midfielder/forward, is in his third varsity season. He was a key player on the 2019 squad that advanced to a Class 3A sectional final.

This year, Carreon’s role has expanded as he plays a more prominent role in the midfield. He vowed to be ready for the season, whenever the games started.

“Last year, I was playing more on the outside,” Carreon said. “This year, I kept practicing more and more in the middle. I was practicing dribbling, passing, just everything. As a team, we want to win that East Suburban Catholic Conference [ESCC] title. That’s our goal.”

Marist opened ESCC play on March 20 at Nazareth with a 4-0 win. Valek posted a hat trick, and Christian Chavez scored a goal. Carreon and McNamara had 2 assists each.

The RedHawks faced St. Patrick, the 2019 Class 3A fourth-place team, on March 22, after press time.

The RedHawks are scheduled to host defending Class 2A champ Benet on March 24.

“We want to get after it this coming week,” Maxwell said. “We see Benet and St. Pat’s, so that will be very telling. We’ll know a lot more about. Beating them and winning conference, those are always the goals.”