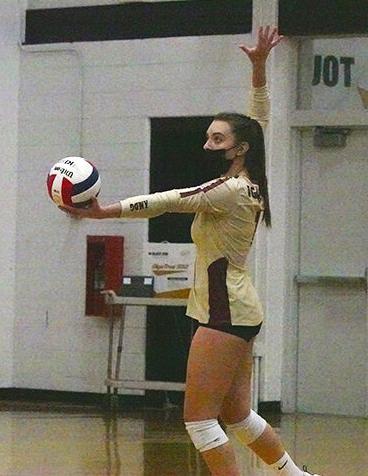 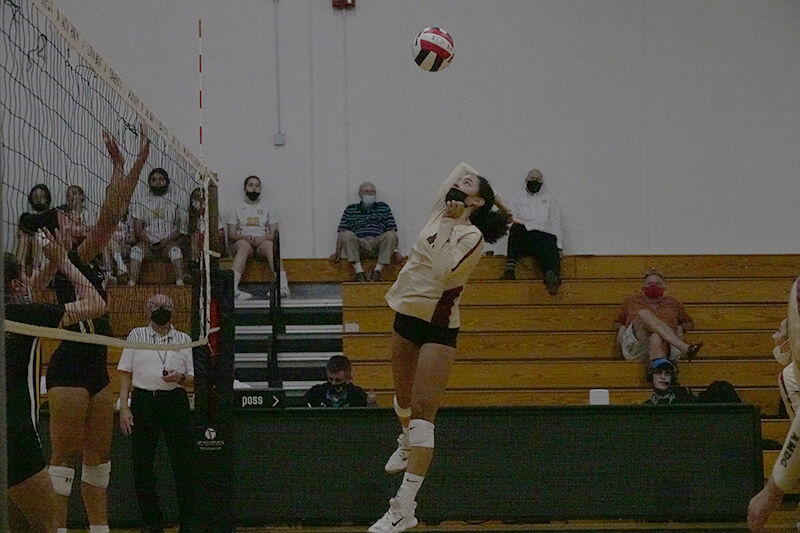 Sophomore middle blocker Gabrielle Williams goes up for a kill in the second set for St. Ignatius. Williams piled up 8 kills, including 4 late kills for the Wolfpack against Marian Catholic. (Review photo) 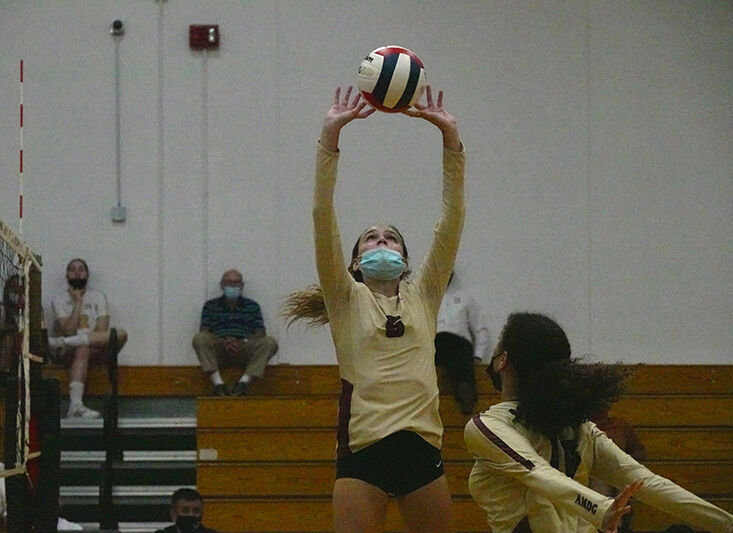 St. Ignatius senior setter Kat Cox passes to a teammate against Marian Catholic. A two-year starter at setter, Cox finished with 21 assists, 5 digs and 3 aces for the Wolfpack. (Review photo)

Sophomore middle blocker Gabrielle Williams goes up for a kill in the second set for St. Ignatius. Williams piled up 8 kills, including 4 late kills for the Wolfpack against Marian Catholic. (Review photo)

St. Ignatius senior setter Kat Cox passes to a teammate against Marian Catholic. A two-year starter at setter, Cox finished with 21 assists, 5 digs and 3 aces for the Wolfpack. (Review photo)

The Wolfpack was set to face two of the East Suburban Catholic Conference’s best teams, Nazareth Academy and Marian Catholic.

For senior Anna Bradley, the goal was simple: win some tough matchups.

“We came in against Nazareth and Marian knowing these are great teams,” Bradley said. “They’re probably two of the best teams we’ve played so far. Our goal was to take them in three sets.”

St. Ignatius was definitely up to the challenge.

St. Ignatius improved to 9-4 with the back-to-back wins.

Against Marian Catholic, Bradley finished with 8 kills and 5 digs.

“The goal was win in 3 sets, but fortunately we won both in 2 sets,” Bradley said. “Both were great games. We were proud of how we played in both wins.”

Closing out the first set, Bradley delivered repeatedly late in the match with 4 kills as St. Ignatius regrouped from a 15-13 deficit.

Bradley showed off her hitting repertoire, floating 2 kills over the block, taking advantage of a high dig and smashing the ball with authority and then battling through the block on a ball that was deflected out.

When her team needed her, Bradley wanted to swing away.

“We were able to bring that drive and that passion of wanting to win and wanting it so bad,” Bradley said. “That’s what brought us together. Even if I got blocked, I was still determined to win and keep pushing. We needed to have that anger.”

However, Bradley wasn’t a one-woman show as sophomore middle Gabrielle Williams stole the spotlight in the second set.

Relatively quiet through the midway point in the second, Williams went to work with 4 late kills as St. Ignatius fought back from a 16-14 hole.

Tied at 22-22 late, the Wolfpack closed courtesy of 2 Marian errors and a Williams kill.

It wasn’t any huge momentum-swinging kill. Williams skied for the ball and got just enough on her swing for the tip across the net.

The ball landed out of reach of the defense, putting Ignatius up 24-22.

In her first varsity season, she’s quickly clicked with her teammates and just as quickly found a rhythm on the court.

“I’m feeling good. It’s nice to play with all these girls,” Williams said. “They’re all so good. We have a good team chemistry, we get along really well, and we’ve got a lot of talent on the different parts of our team.”

Bradley has been especially impressed with the sophomore’s ability.

“Gabby has improved so much. She came in a little shy, and you get it; she’s a sophomore on the varsity,” Bradley said. “She comes in and can jump so high and just slam the ball down. She has that big swing and knocks it straight down. That has definitely helped us win a lot of our games this season.”

In her second season starting on the varsity, Cox knew to feed the hot hand late.

“If she’s hot, I’ll force feed the ball,” Cox said with a smile. “If I’m off the net, I find her hands, and Gabby always finds a way to put the ball down. Whenever I have that perfect pass, I’m trying to keep my middles involved. Any chance I can set the middle, I’ll do it, even force the ball their way.”

Bradley added 2 kills and Daszynski one of her own as St. Ignatius closed the second set on an extended 11-6 run.

“This is definitely a good start,” Cox said. “We’re all putting in our best effort. We don’t stress out, even if we’re playing a really good team. We know how good we can be when we’re on. If we’re giving our best effort, I think we can beat any team.”