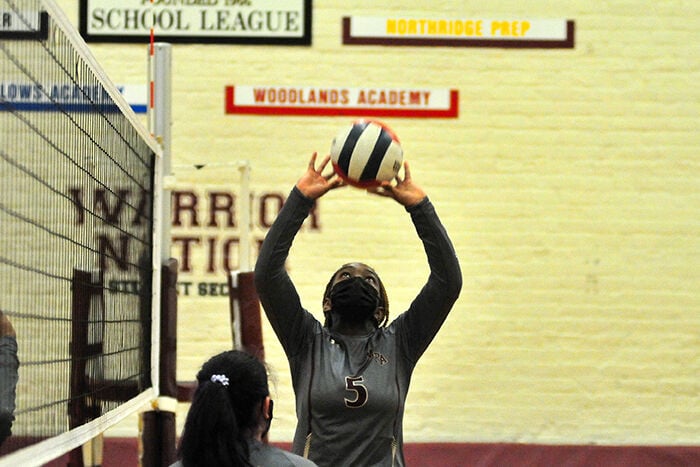 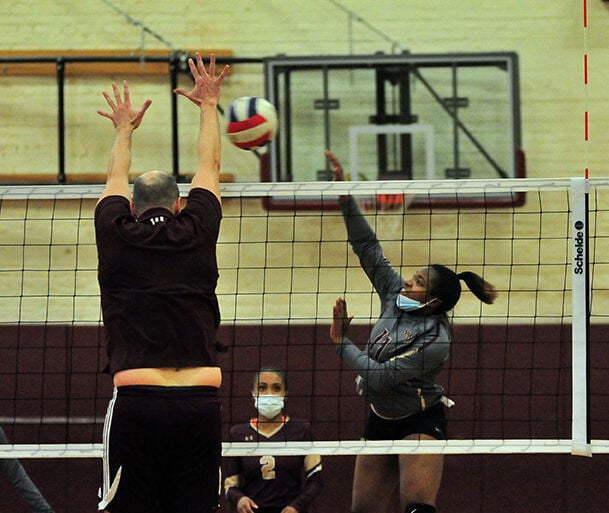 MPA senior Sham White goes up for a kill against MPA Coach Dan Cantone in a scrimmage. The Warriors were scheduled to play a match on April 2 only to have their opponent cancel last minute due to health protocols. (Review photo) 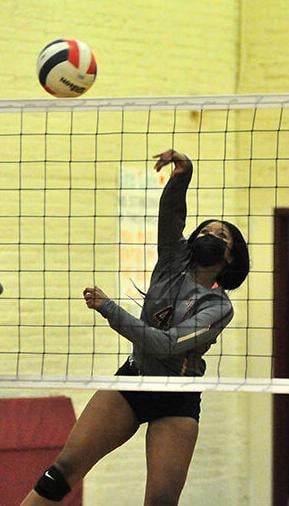 Senior outside hitter Alexus Spann swings away during a recent scrimmage. Spann was a go-to hitter for MPA as a junior in helping lead the Warriors to a regional title. (Review photo)

MPA senior Sham White goes up for a kill against MPA Coach Dan Cantone in a scrimmage. The Warriors were scheduled to play a match on April 2 only to have their opponent cancel last minute due to health protocols. (Review photo)

Senior outside hitter Alexus Spann swings away during a recent scrimmage. Spann was a go-to hitter for MPA as a junior in helping lead the Warriors to a regional title. (Review photo)

After a delayed start to the season because of the school’s spring break, it would be just the Warriors’ third match.

However, this match wasn’t to be.

As the scheduled start time rolled past, the visiting team, Lycee Francais, called to cancel the match because of COVID-19 protocols.

No last-second cancellation was going to slow down MPA.

“We are so grateful we have the opportunity to play volleyball,” Cantone said. “That’s all we really care about. This senior class is so special. I’m grateful we have a chance to be on the court together. These girls have been in the program for four years. It’s so exciting to watch them put in the work and develop as players.”

Senior setter Simone Hubbard (Chatham) has been at MPA since the first grade, and she has been a varsity player all four years.

Enjoying the opportunity to take the court as a senior, Hubbard is making the most of trying times.

“I love playing here at MPA, especially playing with my teammates and Coach Cantone,” Hubbard said. “He’s a great coach. Tonight, I’m kind of sad we’re not playing. I love playing the games. You’re meeting new teams and new players where you don’t know their game. I like that challenge.”

Hubbard was a key performer on the 2019 team that won a Class 1A regional title, the program’s first since 2016. The roster for the regional team was dominated by athletes from the underclasses, meaning they would have got a chance for a big 2020 season in normal circumstances.

Instead, the pandemic wreaked havoc on the high school sports schedule, moving the season from fall to spring and not allowing for a state series.

Cantone said the team isn’t dwelling on what could have been; instead, team members are appreciating the chance to practice and play, even for a short season.

“You watch the girls’ passion from then as freshmen to where it is now,” Cantone said. “I’m happy to be together and play. We’re having a good time.”

For senior Sham White, the opportunity to play is especially memorable.

White is a four-year varsity member of both the volleyball and basketball programs. MPA opted not to play girls or boys basketball this winter due to health reasons.

White said the news was a shock.

“I actually cried that day. With basketball, it has a place in my heart for me,” White said. “It really broke me down. I was so looking forward to Senior Night and Homecoming, or something like it. With volleyball, at least I get to still play a sport.”

MPA is playing its home games this season with no fans in attendance.

Hubbard said the situation is odd during matches, but the Warriors are still going about their usual business of being a team.

“It is surreal. We want to play, so it is a precaution you have to take,” Hubbard said. “With my team, how energized and cheerful you are, how focused you are, you don’t even notice. The noise levels are down, but we’re cheering each other on, talking and yelling out on the court.”