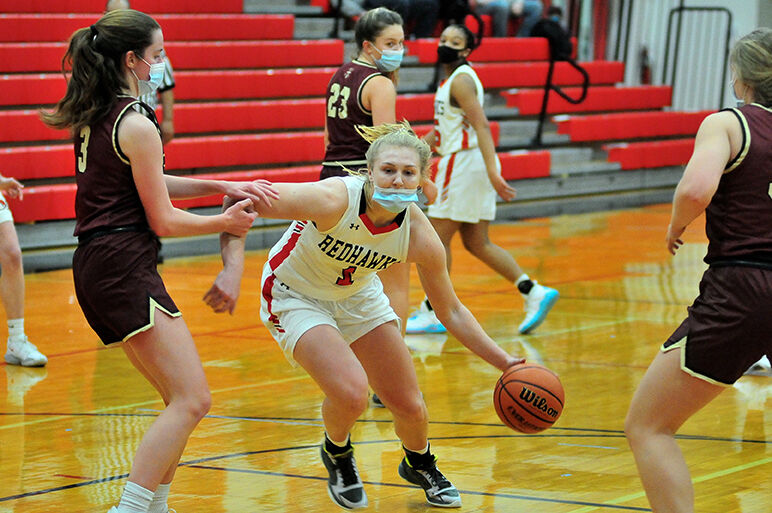 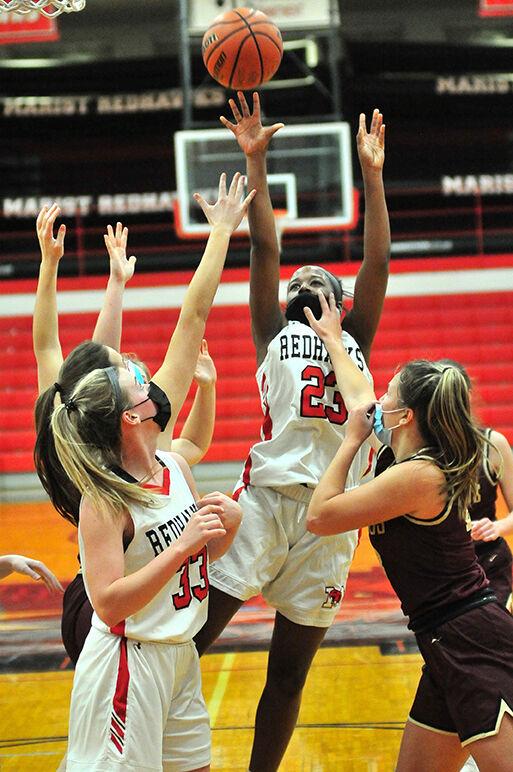 Marist junior forward Le’Lani Harris fights to take a shot in the lane. Harris led the RedHawks with 16 points in their win over St. Ignatius. (Review photo) 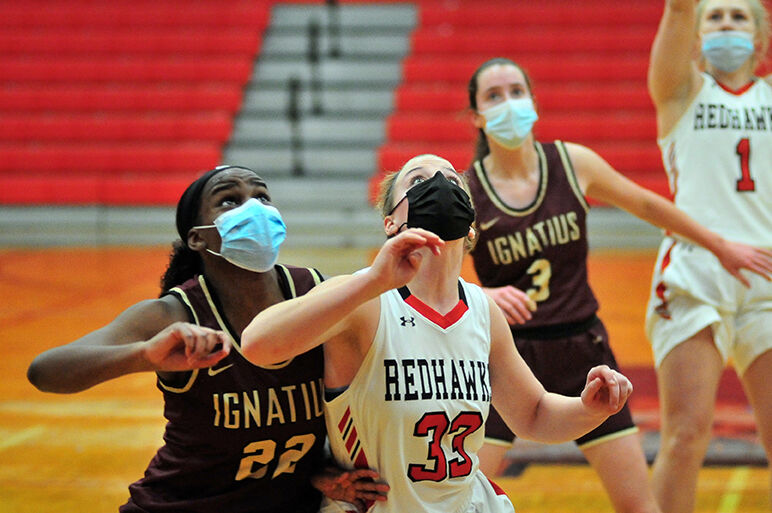 Marist junior Emily Bojan fights for a rebound in the second half. Bojan piled up 8 rebounds and 3 steals for the RedHawks against St. Ignatius. (Review photo)

Marist junior forward Le’Lani Harris fights to take a shot in the lane. Harris led the RedHawks with 16 points in their win over St. Ignatius. (Review photo)

Marist junior Emily Bojan fights for a rebound in the second half. Bojan piled up 8 rebounds and 3 steals for the RedHawks against St. Ignatius. (Review photo)

Marist senior Sydney Affolter had to wait a little longer to get back in the action.

Picking up 2 fouls in the RedHawks’ season opener, Affolter headed to the bench less than two minutes into the game.

She waited almost a full year to take the court again with her high school teammates. The wait had been even longer as Marist postponed three games due to health protocols.

But, when Affolter got back on the court in the second half, she was on fire.

She turned in a dominant third quarter as host Marist blew open a close game with St. Ignatius on Feb. 16 in a 49-32 nonconference win.

“It was definitely frustrating [getting the fouls], but I knew I had a whole half ahead of me,” Affolter said. “I’m supporting my teammates. I’m not used to being on the bench like that. I had to stay calm and contribute, talk on the bench and help my teammates.

Harris, Brusek and Bojan are all Queen of Martyrs Elementary School grads.

With the score knotted at 20 at halftime, Affolter came off the bench to start the third and immediately made her presence felt.

After a St. Ignatius basket, the 6’0” forward drilled a 3-pointer from the top of the key off a pass from junior Kira Chivers.

She followed it up with 4 straight free throws over the next two possessions and then scored on a fast break off a pretty Harris pass.

By the time Harris and Bojan scored a basket each, Marist had scored 13 straight points in just over 4 minutes to go up 33-22. Dominating the paint and limiting St. Ignatius to one shot each possession, the RedHawks led by as many as 22 in the second half.

Affolter said she was making up for the lost first half.

“I was thinking, ‘It’s go time’ because I had to do something to contribute out there,” Affolter said. “I’d been sitting a whole half. I got my head in the game and let the game come to me.”

Affolter (Mt. Greenwood, St. Christina) has been a varsity starter since her freshman year. She is a University of Iowa recruit.

While Affolter is the team’s go-to player, the junior class continues to improve and show it is a force to be reckoned with, including Harris, Bojan, Brusek, Chivers (6 assists) and Cencere McDaniel (6 rebounds).

With Affolter on the bench, Harris and her teammates picked things up in the first half. Harris strongly showcased her game, scoring 9 points.

“Sydney is a big part of our team and an offensive force,” Harris said. “That time helped us come together as a team. We worked together and kept pushing. The force and impact she makes is indescribable. It was good to see us work together like that.”

Marist Coach Mary Pat Connolly said she continues to be impressed by her talented junior class.

“They’ve always been so young, the freshmen and sophomores on the varsity,” Connolly said. “Our whole junior class has come in, and they’ve just been phenomenal. They all work on their games in the offseason. They’re players. It’s nice to see them grow up together.”

Picking up the pace offensively and the intensity on defense, Marist allowed just 12 points in the second half. Chivers, a 5’3” guard, helped limit St. Ignatius star guard Lauren McDonald to just 5 points.

The RedHawks dominated the boards as well with five players finishing with at least 6 rebounds.

“We work on rebounding a lot in practice. Coach Connolly always talks about rebounding is mostly heart,” Harris said. “We want to go out there and let each other know we’re competing. Getting the rebound for the team is one of the best ways to show we’re all out here fighting together.”